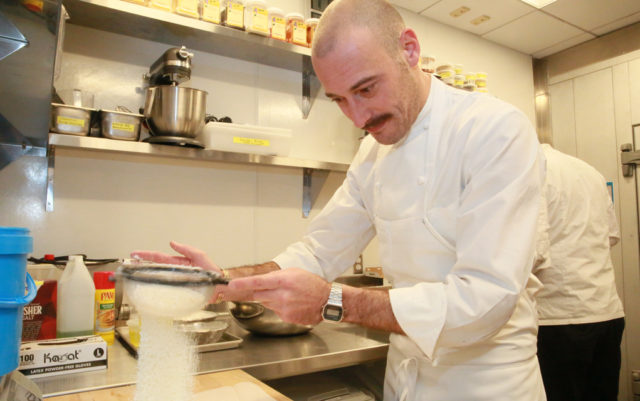 There are 10 of us total. Front of house and back,” says Dan Garfinkel, co-collaborator of Gunbarrel’s Finkel & Garf Brewing Company. He’s the Garf in this equation. “Everybody, we joke, everybody is a Garfinkel. It’s very much a family-run business, and everybody that is involved in any capacity is very much family.”

And if you’re at all invested in the brewing industry, as a consumer, retailer or brewer, Eric Garfinkel (he’s the Finkel, and Dan’s dad) says, “usually you’re running into a Garfinkel somewhere.”

Chances are you’ve seen their product, too. Their cans are designed cleanly, with bold colors, block lettering and simple names — no “King Rasthdragon’s Ludicrous Lament Pale Ale” here. And if you’ve felt oddly drawn to any of their eight regular beers, either on tap or in a liquor store, consider that Eric spent a career in marketing toys before opening the brewery, often bringing home products to try out on Dan and his siblings.

“When Dan was a kid, he tested everything,” Eric says. “We both had a love for it. So we sort of brought some of that sensibility into our taproom and it’s even on our cans.”

But it’s not that the Garfinkels are out to trick you into drinking their beer through marketing tactics that were first sprung on you when you were small (although, hey, life could be worse than being brainwashed to drink their Great American Beer Festival gold medal-winning Oatmeal Milk Stout). It’s just that successfully marketing toys and beer both require one thing: simplicity.

“We saw maybe an opportunity or a need for a simpler, more accessible, approachable focus in the beer world,” Dan says.

“At least from a marketing standpoint, you notice from looking at our cans that we kind of tell you what it is,” Eric adds.

In the three years since opening, Finkel & Garf has attracted a legion of loyal fans because of their well-executed beers in a wide variety of styles. Consistency, which is sadly undervalued in today’s brewing landscape, is their goal, while ensuring there’s a beer for everyone in their selection.

“From the beginning, we didn’t necessarily set out to make beer that was focused on winning awards,” Dan says. “We’re the first to admit we don’t necessarily make the most… we’re not pushing the envelope as far as we can and we’re not looking at the new styles and making new sours or new IPAs. For us, it’s focusing on really good, consistent beer and doing what we do very well.”

And yet, they did win an award: the big, aforementioned gold medal at the 2017 GABF. Some of that credit surely goes to brewer Myke Johnson, recently of Fate. Some of it goes to the Finkel & Garf design. Their relatively small 15-barrel system allows them to work on a smaller scale and make tweaks throughout the brewing process. And there is room for experimentation. Finkel & Garf currently has a small barrel aging program and is one of the few local breweries to produce a lager. Too, their model of canning and labeling in-house enables them to can whatever’s available, slap a label on it, and store for no more than a week before it’s delivered (by them, not a distributor) to retailers. Removing the cost of a distributor, which Eric says can eat into up 30 percent of a brewery’s income, not only means the omnipresent Garfinkels have direct relationships with the people selling their beer, but it enabled the brewery to start with nearly four times as many beers when they launched in 2014 as is typical for a new brewery.

Part of that business savvy came from their experience, but it also came from educating themselves hands-on in the Boulder County brewing community.

“I would say if it wasn’t for the fact that the community was open and inviting, it would’ve been difficult for us,” Eric says.

Dan and Eric spent about a year before launching their brewery helping out and asking questions at Avery, Asher, Bootsrap, Sanitas, Oskar Blues and other breweries about everything from packaging to barrel systems to canning to taproom design and more.

“To a person, the brewing community was a great source of help,” Eric says. That’s been a familiar sentiment for the family-focused Garfinkels.

“Craft is a community and the goal really is to grow craft together, and I think that’s the mindset of a lot of the breweries,” Dan says. “We all feel that way. Whether you’re buying our beer, Avery’s beer or Sanitas’s beer, that’s great. Let’s all grow together.

Brewing is a unique industry in that what makes craft popular is its locality, flexibility and quality. As breweries scale up, it’s not always possible to ensure any of that — beers are shipped out of state, profits and not passion start to drive production, and it’s not possible to ensure everything tastes perfect or is as lovingly crafted as it was when the brewery was small. So breweries, as it’s been much reported, are put in an awkward position of having to almost limit growth or else worry about losing the core of what made them popular in the first place.

This is not a concern to the Garfinkels. At least yet — it’s only been three years.

“I would say we’re less growth-oriented than some,” Eric says. “We’ve never thought about, ‘Hey, we gotta get out of state.’ We’ve never said we gotta get our beer to the Western Slope or even up to the I-70 resorts. We’re never going to be a huge brewery, I can tell you that. We’re kind of in a nice spot where we can do what we do and do it right.”

Staying small will also serve the Garfinkels’ quest to provide a space for the community to gather. Finkel & Garf hosts nonprofit events, comedy nights, group gatherings and more, and it also donates beer to community efforts. Beer, if done well and simply, can unite people as well as anything.

“We’ve always kind of enjoyed the idea of bringing people together,” Dan says. “Growing up, there was always something social going on. We’re social people. So when you look at what we do and the way we look at beer, it’s a facilitator, and it brings people together. [Eric] describes it as a social lubricant … people like to get together and talk over a beer. Or friends come together over a beer. For us, that’s been something we’ve always liked, whether it’s toys you’re playing with as a kid with your friends, or getting together with your friends as an adult over a beer. I think that’s something that kind of resonated with us.”