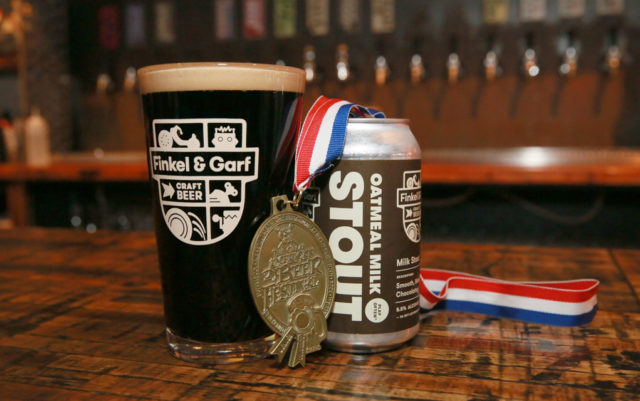 Trying to pin down exactly what makes a stout is no easy task. We know they originated in Britain during the 18th century, are considered to be one of the first “true” beer styles and are typically dark in color, roasted in flavor. From there, it gets a little foggy.

That’s because stout didn’t start as a style; it started as an adjective. Had you walked into a pub around 1750, you likely would have called for a “stout porter,” porter being a popular dark ale and stout denoting the high alcohol content. Then in the early 1800s, the Irish brewery Guinness brought the alcohol content down to just over 4 percent by volume, and started sending their iconic beverage to the States in 1817, converting stout from adjective to noun. The modern-day notion of stout took hold.

Guinness, with its signature oily black color, fluffy white head, aroma of roasted malts, flavors of burnt coffee and tangy finish, has become both an emblematic style for brewers and a foundation for versatility — including, but not limited to, additions of milk chocolate, dark chocolate, vanilla, mint, spice, chillies, chai, oatmeal, mole and on and on. Heck, you can even find a donut stout if you keep your eyes peeled.

“Stout is a building block,” says John Fiorilli, Mountain Sun’s director of brewing operations. “It’s the base beer itself that makes all these crazy flavor combinations work.”

And those crazy flavors have given stout a major resurgence, evidenced by Mountain Sun’s annual celebration of the dark arts: Stout Month. There’s a rotating selection of 31 house stouts and 36 guest stouts, from O’Stengl’s Dry Irish Stout — which uses the traditional malt profile of two-row, roasted and flaked barley and East Kent Golding hops — to Girl Scout Stout, a mint dark chocolate stout reminiscent of a Thin Mint cookie thanks to the use of dark and milk chocolate, mint and peppermint adjuncts (flavorings) to bring the brew to life.

“The options just end up being endless,” Fiorilli says.

But, if the sky’s the limit, then what makes a stout a stout? According to Fiorilli, two simple traits: they need to be dark and they need to exhibit roast.

“In my mind, those are the only defining characteristics,” Fiorilli says.

Everything else is dealer’s choice.