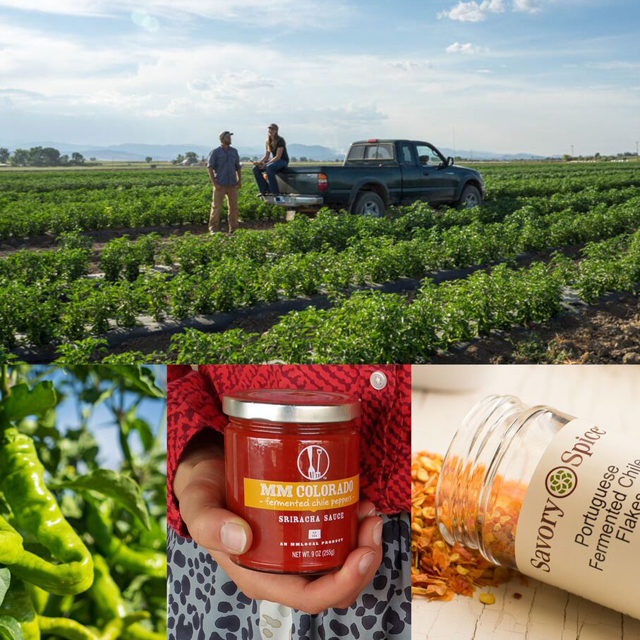 Lots of Colorado food companies call their products “local,” but it may really mean “regional.” Many restaurants detail the local source of their ingredients and the word is plastered all over signs in the produce departments of Boulder’s 17-plus grocery stores. But does local include all of Colorado?

The sauce is made by fermenting long Portuguese chilies grown at Longmont’s Full Circle Farms, which produces more than 100 varieties of USDA Certified Organic vegetables on 1,100 acres of Boulder County Open Space. Besides a roadside stand, the farm also sells at the Boulder County Farmers Markets.

When MM Local makes the sauce, the process leaves behind a pile of orange-hued flakes and seeds. The company contacted friends at Colorado-born Savory Spice about the food waste, which would be otherwise headed for the compost pile. The dried flakes taste and smell exactly like Sriracha sauce, without the tartness but with all the umami.

Once you sample these Portuguese Fermented Chile Flakes you realize how totally lame the standard red chile flakes are atop a pizza. They are available at local Savory Spice shops while they last.

Speaking of pizza and pi size

Stop ordering small and personal size pizzas. You’re just costing yourself dough, according to NPR’s Planet Money. They report that one 16-inch pizza has about the same area as 1.3 14-inch pizzas or four 8-inch pizzas. They sampled pizza prices nationwide and figured out that to enjoy the same acreage of sauced crust in a 16-inch pizza, you’d have to spend an extra $2.35 on 14-inch pizzas, or an extra $16.41 on 8-inch pizzas. The math: The area of a circle increases with the square of the radius meaning a 16-inch pizza is actually four times as big as an 8-inch pizza. They did not weigh in on the other critical pizza variable: depth, as in deep-dish and Chicago-style pizzas. That computation involves string theory.

How the hippies won the food war

France’s Danone, seller of Dannon yogurt and Evian water, has bought Boulder-born White Wave Foods. The new DanoneWave company will headquarter in Broomfield and White Plains, New York. White Wave was part of the first wave of natural food pioneers in Boulder back when tofu had a near-zero-name-recognition factor. It was 1977 when Steve Demos started making bean curd by hand using an iron cauldron in a tiny Boulder kitchen and started selling it to health food stores. Last year, Demos told Colorado Public Radio: “At the time, when the shop was making tofu, it would be fresh every morning. And there was a health food store down the street in Boulder called Down to Earth. Trudy Stewart and her child would load up in the little red wagon and take maybe 50-100 blocks of tofu three to four blocks down the road.”

The pie world is mourning the recent death at 95 of Dorothy Mengering, David Letterman’s mom. In her quiet way, she did more to make homemade pie hip again as anyone in America. “As long as David was home, I would make him a chocolate chiffon pie for his birthday,” Mengering once said.

She was always on the show before Thanksgiving from the kitchen of her Carmel, Indiana, home to host a segment called “Guess Mom’s Pies.” The following recipe from Home Cooking with Dave’s Mom is for a pie crust which she notes: “maintains its flaky qualities even after being rolled out a number of times.”

In a medium bowl, cut shortening into flour, sugar and salt until the mix looks like cornmeal or small peas. In another bowl, slightly beat egg yolk and combine with milk and lemon juice. Add to flour mixture and mix by hand until it forms ball. Roll on well-floured pastry cloth with well-floured rolling pin.

I wish the folks at Conor O’Neill’s happy trails. The Irish bar and restaurant closed for good on April 22 after 18 years in Downtown Boulder where only banks can afford the rent. The space was previously occupied by The James Pub. … All you have to do is eat out tonight to do some real good. More than 200 local restaurants and breweries are donating 25 percent of sales on April 27 to Project Angel Heart, which prepares and delivers medically tailored meals to those living with HIV/AIDS and other serious medical conditions. Participating Boulder eateries include Avery Brewing Restaurant, Beau Jo’s Pizza, Blackbelly Market and Southern Sun Pub. Complete list: diningoutforlifedenver.org. … Slow Food has declared April 29 as World Disco Soup Day to call attention to global food waste. Disco Soup is a way of turning food waste into something great to eat. Details: slowfoodyouthnetwork.org/blog.

For sheer artisan ice cream bliss I give you the Gooey Cooie, an ice cream sandwich that is worth the drive. At Sweet Cooie’s Ice Cream, a retro scoop parlor in Denver’s Congress Park neighborhood, the kitchen bakes yeasty brioche doughnuts that are halved to be filled with ice cream flavors from Chocolate Salted Oreo ice cream to Horchata. I recommend filling it with bright and tart Lemon Meringue Pie ice cream. I like the fact that tastes of various flavors are offered in small metal teaspoons.

“You put your left index finger on your closed eye and your right finger on the cheese. If they feel sort of the same, the cheese is ready to eat.” — M. Taittinger. (Note: This refers to soft-ripened cheeses like Brie, not firm or hard cheeses like Cheddar or Parmesan.)

John Lehndorff hosts Radio Nibbles at 8:25 a.m. Thursdays on KGNU (88.5 FM, 1390 AM, kgnu.org). Send your photos of food-related roadside attractions in Colorado to: nibbles@boulderweekly.com to be shared in future columns.

Side order of sustainability