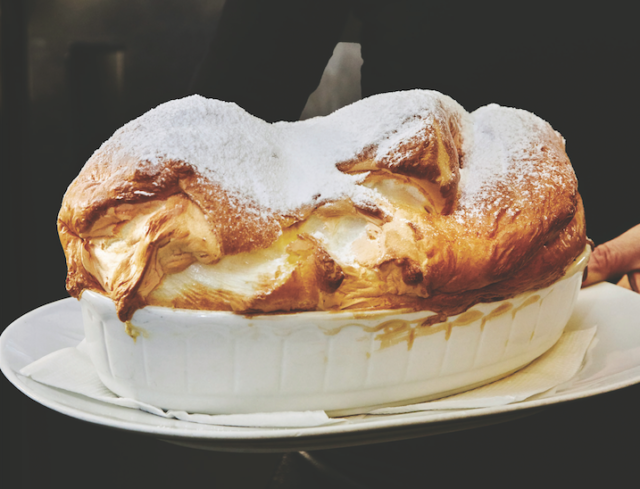 The last person I saw was the Klein Matterhorn lift operator, who told me he was shutting down the lifts due to wind and even if I wanted to go back, I couldn’t,” Meredith Erickson writes in the introduction of Alpine Cooking, a captivating and beautifully photographed cookbook with recipes, stories and images from her three years traveling through the Alps.

“I told myself to keep calm as I started the descent. What would normally take twenty minutes for an average skier like me took a lot longer, but I can’t tell you the specifics because I was scared, but also angry. Angry at the weather, angry because of the lifts, but mostly angry at myself for doing this — all for the purpose of eating Zürcher Geschnetzeltes.”

From the comfort of… not an Alpine mountainside in hideous weather, Erickson says, “I feel like everyone reading this book is going to be like, ‘She’s such a f—up because every chapter begins with some sort of accident. Happy accidents is how I got from place A to B.”

Erickson traveled to restaurants, farms, dairies, cheese cellars, winemakers and more, all above 1,000 meters in the European Alps — Austria, France, Italy and Switzerland. She came back with hundreds of recipes and stories; she selected the best and put them into Alpine Cooking.

“The way I write books, I don’t think of them as a compilation of recipes,” Erickson says. She looks for “a story from A to Z, and the recipes are the punctuation, giving you another dimension.”

Take, for instance, her story of discovering the kaiserschmarm: “Served right from the frying pan it was cooked in, it’s a jumble of buttery shredded pancake generously dusted with confectioners’ sugar. In other words, it’s best made in a 300-year-old hut in Tyrol. So that’s how I came to try it at the Gampe Thaya hut, located at 2,000 meters (6,560 feet) in the southern Ötza Valley. … Regardless of the season, owner Jakob Prantl will welcome you, pour you a beer, and just maybe make you Kaiserschmarm with his own two (very large) hands.”

Though she wasn’t necessarily prepared for the minor car accidents, ski mishaps, road closures, weather delays and all the other pitfalls that impeded her travels to remote villages throughout the Alps, Erickson was ready to write Alpine Cooking. She first co-wrote the The Art of Living According to Joe Beef — detailing the food and exploits of Montreal’s Joe Beef, renowned for its eccentric and exceptional menu (The New Yorker called it North America’s most hedonistic restaurant) — after the restaurant transformed from a dive into the destination it is today. She was a server at nights there and an editor during the day. Book-writing suited her and she co-wrote several more, including the upcoming Frasca Food and Wine book. (She’ll be at the Alpine Cooking cookbook dinner at Boulder’s Frasca on Monday, Nov. 11, with a prix-fixe menu based on recipes from the book.)

Hours of research in Europe and at home (in Quebec) helped Erickson narrow down the stories and recipes she wanted to include in the book. On her travels, she says she was “invited to countless dinners,” which all helped create a vision for the book and generate an understanding of what makes Alpine cuisine unique.

One of the unifying factors of the mostly mom-and-pop places she visited in remote villages is, ironically, isolation. Food steeped in tradition untouched by outside influence or commerce shares traits, Erickson says.

“No one’s going to come and remove snow and make things any easier for you and therefore you’re on your own, you have to rely on your own capabilities. There are no franchises really in the Alps except for gas stations on motor ways. Everything is family-run and old-world.”

That isolation translates into the taste and type of food in the Alps. For instance, Erickson says farmers in the region take their cows up to high altitudes in the summer to pasture on fresh grass that imparts a unique flavor into milks and cheese. That’s why your perception of fondue might expand if you have it high in the Swiss alps, with cheese made from fresh milk from Alpine-raised animals.

That might make you think the only place to have fondue, or any of the recipes in Alpine Cooking, is in the Alps, but the idea is to invest, maybe, in better fondue cheese wherever you are. Erickson says the recipes in the book are all meant to be made by the home cook across the world.

“I’m a home cook, so everything in this book works and it’s for the home cook,” she says. “It doesn’t depend on products you can only get there. In the Alps the whole thing is isolation anyway. It’s about having the blinders on and how that can give you creativity.”

The book includes regional variants of classic dishes as well as some plates you’ve likely never heard of unless you have relatives in the region or have traveled there extensively. Familiar, but spun, recipes include goulash with speck dumplings and a pumpkinseed oil and fresh cream sundae from Italy, raclette from Switzerland and schnitzel from Austria, which is actually, originally, from Italy. New finds include duck liver pate wrapped in lardo and Austria’s tafelspitz, beef rump simmered in hand-made beef broth in a copper pot with inexpensive and fresh vegetables, and served with apple horseradish and chive cream.

All this talk of the Alps and hearty meat dishes might thin the air around you and fill your head with snow, but the recipes in the book are good all year-round, and Erickson took special care to include recipes and stories from spring and summer. It’s a comprehensive culinary guide to the Alps that enables you to try zürcher geschnetzeltes — a Zurich ragout of veal, cream and wine — without crossing any mountains.