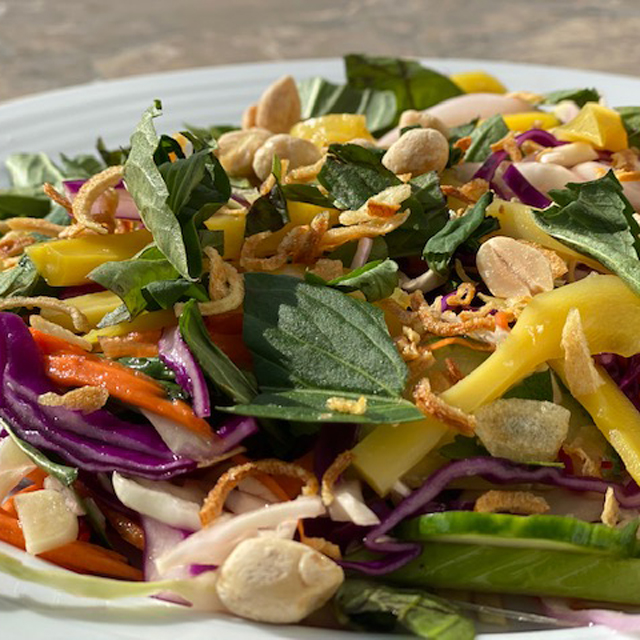 Natascha Hess was sitting in a restaurant with her husband, Steve, late one night several years ago. They were the only two people in the restaurant and were “smashing ramen,” says Carrie Baird, who was peering out from the open kitchen at the couple.

So Hess and Baird struck up a conversation, the former telling the latter that she was planning to open a food truck and asking, “Do you ever give lessons?”

No, Baird didn’t, but she invited Hess to stage — basically an informal apprenticeship wherein one works in a kitchen and learns on the job. Hess wanted to bring some of the flavors and dishes from her time living in China back to Boulder, but she first had to acquire a few basic skills.

“I didn’t know how to hold a knife,” Hess says.

So Hess learned (a lot) from Baird for a couple months until she finally got her own truck, The Ginger Pig. Baird — who was a finalist on Top Chef, beat Bobby Flay with her huevos rancheros, and is a James Beard Award finalist for her work at Denver’s Bar Dough — was in between jobs and offered to come on board and help. Through those experiences, the two became fast friends, even if that was never the intention.

“We never meant to become friends,” Baird says. “That was a happy accident.”

Fast forward to today, and the two are in business together, running the That’s What She Said restaurant group, with two stalls — The Ginger Pig (Hess’) and Rose’s Classic Americana (Baird’s) — set to reopen at Boulder’s Rosetta Hall on June 4.

The coronavirus presented a unique situation for chefs and restaurants across the country, but certainly more so for Baird, who opened Rose’s only seven days before stay-at-home orders shuttered the doors of Rosetta Hall for dine-in service. Under normal circumstances, the attention garnered from her James Beard Award nomination and her exodus from Denver would have helped carry the excitement of Rose’s launch in Boulder.

But, she says, “People are going through such hard times, it’s hard to celebrate, to take a moment and be proud of my team and myself. Rose’s is going through such a strange phase that we have to stay the course. A year ago we would’ve celebrated and put it all over social media, but it doesn’t feel right right now.”

However, the time off has allowed both to… sleep, that’s a first. But also to generate and hone new menu items based on seasonal ingredients. Those include new iterations of Baird’s “fancy toasts,” which helped separate her on Top Chef, including a New England chowder shrimp toast and a “just the top of the French onion soup” toast. There’s also a new pie program at Rose’s — so good it’ll make you think you’ve never really had good pie, Hess says — including unique flavor combos like sweet corn with sour cherry, as well as a blueberry, balsamic, sharp cheddar, salt and black pepper pie.

At Ginger Pig, there’ll be Vietnamese jackfruit salad and kung pao cauliflower — a dish Hess says she ate five times a week in China because “it was one of the few things I knew how to order.” It skews more toward the Chinese version (as opposed to the familiar Chinese American iterations), with a thinner sauce, less sugar and a vinaigrous punch.

There’s also a dish near and dear to Hess’ heart — a spicy Sichuan eggplant, which is what made her want to start cooking in the first place.

“When I lived with a Chinese family, the mother made it a couple times a week and it showed me how complex Chinese food can be,” Hess says. “It’s spicy, sweet, sour, salty, umami, it has all these things.”

Fitting that the person who helped her learn to cook, Baird, also helped her hone the recipe over the last few weeks.

Let’s take a not-too-distant leap and say when The Ginger Pig and Rose’s reopen, their prior successes will continue. But no leap is required to say that fortuitous meeting in a ramen bar years ago helped propel those successes and led to the creation of two excellent Boulder food establishments.

“I learned how to be a leader [from Baird],” Hess says. “I’ve learned how to be a chef, which is this term that people have so many definitions for. She’s taught me what that actually means, and it’s a big responsibility. It’s not just making food; it’s being a coach, being a leader of the team and the kitchen. Really she’s taught me how to be a better person. The things I’ve learned in the kitchen from Carrie are undeniable, but the effect she’s had on me has been so much broader than that.”