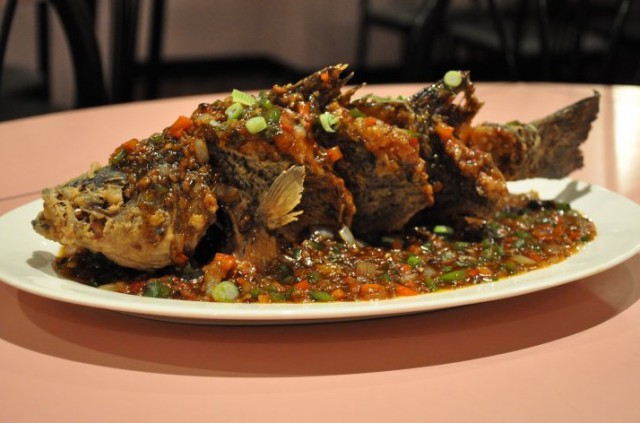 Having never eaten a Pu Pu platter on a boat or with a goat I thought it was high time I sampled this classic Chinese-American appetizer assortment. You see, when I went to Chinese restaurants with my folks, things like braised chicken feet were far more likely to appear on the menu than this Americanized appetizer platter.

Lee Yuan, that venerable joint located near the intersection of Boulder’s Baseline Road and Foothills Parkway, seemed to be the place to indulge in this retro specialty. Sliding into our seats for a weekday lunch, colleague Carin and I were alarmed to see a party of eight in the midst of ordering. We feared these folks would tie up the kitchen, and we would be vexed by a lengthy wait.

Undaunted, we took stock of the lunch combo selections, which featured $6.50 meatless options such as mixed vegetables in garlic sauce and family-style tofu. The most expensive items were the $8.95 duck dishes, which included a spicy Szechuan preparation. Similarly priced teriyaki chicken and an ambitious entree of scallops, shrimp, chicken and veggie rounded out the bill of fare’s upper end.

Our fears of an inordinately long wait were quickly allayed when a server appeared, took our orders, and swiftly delivered our first course soups. These were standard-issue Chinese restaurant offerings, which wasn’t necessarily a bad thing. Carin’s egg drop was a soothing affair, with silky threads of white and yolk streaming through a pleasantly mild broth. The hot and sour wasn’t overly assertive. Instead, it illustrated the kitchen’s judicious hand with vinegar and pepper, which prevented this soup from leaving a one-note impression of too much tang or heat.

Next up was the long-awaited $10.95 Pu Pu platter, a dramatically presented assortment of fantail shrimp, barbecue ribs, skewered beef, fried cheese wontons, egg rolls and chicken wings. The centerpiece of this sprawling plate was a small sterno-fueled hibachi, and I’m still unclear if its purpose was functional or simply decorative. Fried items were freshly prepared, emitting plenty of heat and mouth-pleasing texture. The wings and ribs were moist, guilty pleasures, akin to good bar fare. The skewered beef had a sweet teriyaki-like appeal with an old-school garnish of maraschino cherry.

Following on the dramatic pageantry of the Pu Pu platter, the solid $6.95 lunch specials Carin and I sampled seemed a touch anti-climatic. Not that there was anything wrong with these selections, as they were classic exemplars of Chinese-American eats. My lemon chicken featured a deep fried slab of white meat poultry, albeit a touch dry, but was redeemed by a bright and surprisingly fresh-tasting citrus sauce.

There was no question that Carin’s sesame tofu had arrived mere moments out of the fryer. It was mouth-burningly hot, creating a pronounced contrast between the appealingly crisp exterior and silken soy center. An encore appearance by the endearing egg roll that was a component of the Pu Pu and fluffy fried rice led additional heft to our lunches.

Lee Yuan’s a solid standby when it comes to affordable Chinese chow. Whether it’s trying out one of the lunch standards or sampling a Pu Pu platter for the first time, this is a spot that won’t disappoint the aficionado of Chinese-American combos.