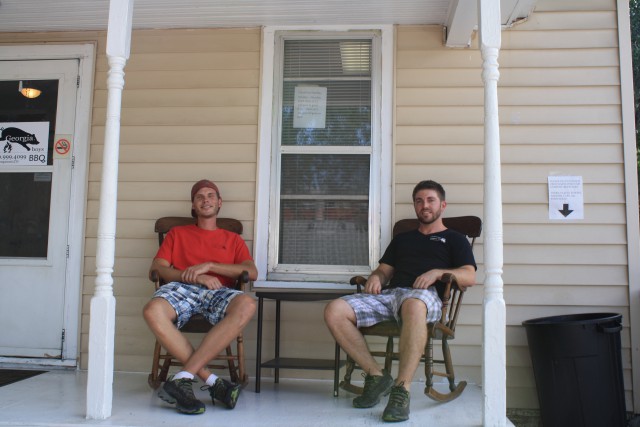 One of the required American barbecue trail pilgrimages is Dallas’s Sonny Bryan’s, a joint renowned for its meltingly tender beef brisket. There are several locations scattered throughout the city, but the cognoscenti know that the food is best at the original shack on Inwood Road. Inside, you’ll find undersized school desks for seating, recycled beer bottles filled with sauce perched atop hot plates, and a closing time based on when the meat runs out.

Longmont’s Georgia boys BBQ shares much with Sonny Bryan’s. This eatery’s situated in an old house nestled among warehouses a stone’s throw from downtown. It’s an order-at-the-counter operation with limited picnic table seating — most of their business is takeout. Like Bryan’s, their hours aren’t strictly defined, but when I visited for dinner, closing time was nigh, as the kitchen was nearly out of everything.

The menu consists of $6 sandwiches, $9.95 plates with sides, and the sides themselves, which range from $1.75 to $3.95. Available meats include pulled pork, pulled chicken and brisket, with sausage and St. Louis-style ribs showing up as specials. The rotating sides include coleslaw, mac and cheese, potato salad, casseroles (one a green bean number, the other featuring sweet potatoes) and beans. Unfortunately, when friends Tim, Sara, Tertia and I visited, the beans were the only remaining side.

Since Sarah and Tertia weren’t all that enthused about that side, each opted for the pulled chicken sandwich rather than the platters with their double bean helping. Moist, tender, and gently infused with smoke, this poultry gave up very little to its porcine analog. There was plenty of bird on this sandwich, which is a refreshing change from barbecue joints that price their offerings on par with controlled substances.

Tim had the brisket plate, while I opted for the pulled pork. Once one leaves the Southern/Midwest BBQ belt, you’re more likely to find bad versions of these stalwarts than good ones. The best preparations draw upon slow smoking to transform inexpensive cuts into marvels of flavor and texture.

Both meats fit into this category, enhanced by proper seasoning. Proof of smoking was visible in the brisket’s coloring, and the smoke flavor correctly mingled with the seasoning. The brisket was a paragon of tenderness, and the shredded pork went a step further with a velvety, melt-in-your-mouth quality.

The Georgia boys’ sauces further complemented the meats’ flavor. While the fire sauce packed a punch, one could also detect hints of smoke and sweet before the heat intensified. My favorite was the medium, a tamer melding of peppery, tangy and sweet. Lastly, the double side of beans was shockingly good. Rather than generic brown glop, this version was an intriguing three-bean mix enhanced by pickled peppers. We could have easily had these as a meal by itself, and all of us were motivated to return to try the other selections, based on the strength of these beans.

My only issue with Georgia boys BBQ is that I have to put thought into the timing of my visits to avoid disappointment.

While they’ve only been open for a few months, they are already a serious contender for best barbecue on the Front Range. It’ll certainly become as favored a local destination for barbecue as Sonny Bryan’s has been for Dallas.