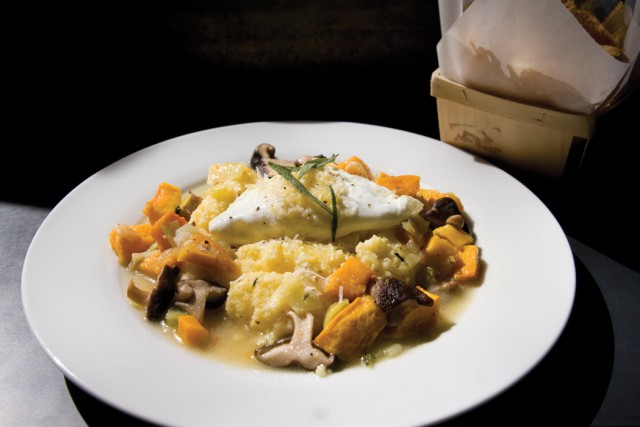 After taking a head count on my most recent visit to the Beehive Restaurant and arriving at a grand total of 20 women and four babies to only two men, I found myself rushing home to watch Fried Green Tomatoes for the first time in years. Between the circulation of estrogen and the rustic-chic setting — embossed tin ceilings, weathered wood floors, Mason jar pendant lamps, community tables and all — I did declare brunching at this farm-to-fork charmer downtown was like stepping into the Whistle Stop Café, and I wanted to see how far I could stretch the metaphor.

Well — to kill the suspense — the answer is not far, 21st-century Boulder being light years from pre-Civil-Rights-era Alabama. But owner Janice Henning’s culinary philosophy does hearken to the days of home canning and chicken cooping and making do with what you’ve got in any given season — what many chefs today paraphrase as “taking quality ingredients and not screwing them up.” It’s an ever-admirable approach that, at its most successful, yields dishes of notable clarity and purity: think deviled eggs that boast a zesty, almost mousse-like filling beneath a sprightly garnish of pickled carrot and watermelon rind, or a profiterole that embodies summer’s last hurrah — the light, fresh pastry bursting with the tang of lemon curd and plump raspberries, softened by dollops of whipped cream. The food here can also be just plain fun, from a basket of weightless gougères (cheese puffs) to a skewer of “devils on horseback,” or hot, juicy, bacon-wrapped dates stuffed with pungent blue cheese. Sometimes, though, the overarching focus on simplicity only serves as a nagging reminder of the difference between home cooking and the cuisine we go to restaurants for in the first place. Given their respective price-to-portion ratios, we rightly expect rather more panache from a place like the Beehive than from your average Whistle Stop Café, yet we don’t always get it.

Take the Harvest I tried on another visit, a chunky stew served over polenta for lunch and dinner or oats at brunch. (The three menus overlap quite a bit, though the evening repertoire is somewhat more elaborate than the daytime roster of shared plates, egg dishes, salads and sandwiches.)

It was almost stunning: under a dusting of grana padano, the airy cornmeal porridge beefed up the broth without dissolving into it, as did the yolk of the perfectly over-easy egg. And the vegetables — various squashes, shiitake mushrooms, onions — looked and tasted as though they’d seen the inside of a picking basket moments prior. But in addition to salt and pepper (which my companion and I had to ask for, as there are no shakers on the table), the dish as a whole lacked textural contrast, and I found myself crushing gaufrettes over the top just to keep it interesting. At $6, those fresh-fried, waffle-cut potato chips are an addictive staple that hardly need the small ramekin of garlic aioli they come with — for an extra $2, that is. Happily, they also come with the $13 burger; toppings, however, don’t, other than pickled onions and a romaine leaf, plus ketchup and mustard on request. Add cheese, bacon, or the admittedly excellent, mustard-seed-studded sweet cucumber pickles, and it’s another $2 each; at that point, you might understandably begin to feel a bit nickel-and-dimed, not to mention confused as to why a “locally pastured, certified Angus” beef patty atop a soft white bun from Breadworks, while good, should cost noticeably more than its likewise carefully sourced counterparts at countless eateries nearby.

I had similar quibbles with other items. Adorably presented though it was, a chilled leek-and-potato soup du jour proved lackluster until we added, you guessed it, salt and pepper. Luscious potted salmon would have made for a satisfying appetizer with some crackers or crostini — which, judging by the website, is how it’s sometimes served. But a small scoop atop what was essentially a garden salad did not a polished entrée make. Then again, we didn’t have many options; by the middle of a weekday lunch rush, the kitchen was out of chicken for two main courses, leaving only three or four non-breakfast plates to choose from.

The Beehive, in short, seems less to bridge two concepts — that of the casual farmhouse café and that of the twinkling upscale destination — than to be stuck between them. Along with the emphasis on premium ingredients, earnestly attentive service and a fine bar program featuring boutique wines, craft beers, and seasonal cocktails like the frothy, zippy Indian Summer Lemonade are hallmarks of the latter. But one too many overlooked details would be easier to accept at the former, with its lower tabs. If they’re seen to, all the rest might well snap into place.