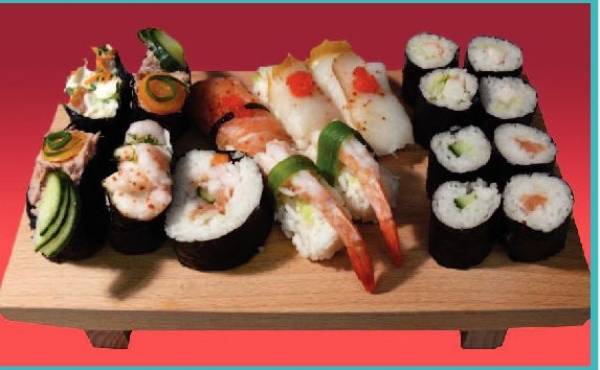 Grocery store sushi has earned a reputation on par with the pop music of David Hasselhoff, and consumption of these commodities is driven more by expediency than good taste.

However, this impression is powerfully refuted by Sachi Sushi, an honestto-goodness sushi bar nestled within the Niwot Market. This isn’t a place for prepackaged, preservative-laden handrolls prepared elsewhere. This is a place where the raw fish is sliced on demand and the hot items are cooked to order.

The reasonably priced menu here features sushi, traditional donburi rice bowls, curries and a handful of fish and meat entrees. The latter category includes two types of grilled mackerel and Korean barbecue beef. Much to my dismay, this eatery was out of one of my all-time favorite fish dishes, miso black cod. Other available items include the classic Hawaiian hamburger dish, loco moco, and packs of gyoza dumplings to go.

Both my friend Sally and I started dinner with $1.75 bowls of miso. This soy-based soup was excellent, possessing a clean taste without the heavy saltiness associated with prepackaged or poorly prepared versions. The addition of sliced abura-age, or fried tofu, made this soup more interesting than most, contributing a whisper of crisp with a pleasant chewiness.

Our other starter was the $11 rainbow roll, which quickly allayed any lingering concerns about quality. The sushi equivalent of a pizza with the works, this is a California roll wrapped with several types of fish, including fresh-tasting mackerel, salmon and tuna. My only quibble is that I prefer my sashimi to be a few degrees cooler, although I wasn’t concerned that the temperature of the fish presented a health hazard. I’ve also encountered this temperature issue in restaurants where I was paying a lot more.

Sally’s bargain-priced $9.95 dinner of mackerel came with a bowl of rice and a cooling salad of matchstick-sized strips of carrot, cucumber and radish. The simply grilled fish had a wonderfully crisp skin vaguely reminiscent of nori seaweed, and a texture both firm and moist. Patches of dark meat were deliciously fatty, and a garnish of grated daikon splashed with a few drops of soy sauce complemented the fish’s substantial richness. I suspect that if one were visiting a Japanese fishing village (preferably one where they aren’t offing dolphins), they would find something quite similar to this meal.

Chirashi, the dish of sushi rice topped with assorted sashimi, comes in two versions. For $12.50, there’s your basic iteration, and for $16.75, there’s the deluxe version with raw shrimp and salmon eggs. At the lower price point, the chirashi is a terrific deal, while the more expensive version is competitive with what you’d pay at a traditional restaurant. Nevertheless, this amply portioned dish allowed me to run through the all the varieties of fish, ranging from silky salmon to pleasantly briny mackerel. Other ingredients included bits of pickle and shreds of sweet egg, which further contributed to this dish’s heft.

There’s very little to fault about Sachi Sushi, although a closing time later than 7 p.m. would better accommodate diners.

However, since this appears to be a two-person operation open every day from late morning on, this may not be a reasonable request. What isn’t in doubt is the staff ’s friendliness, as they happily answered our questions about the menu.

Black
Cod is another one of a long line of once inexpensive fish now prized
by gourmets. Also known as sablefish, this species was originally known
as a deli staple, smoked and sold as “poor man’s sturgeon.” But ever
since New York’s famed Nobu restaurant popularized it, Omega-3-rich
black cod has increasingly found its way to trendy tables. Nobu’s
preparation involves a marinade of mirin rice wine, sugar, sake and miso
paste that complements the fat and velvety texture of this whitefish.
Incidentally, it’s also a popular baitfish among Alaskan anglers, who
have given it the moniker “halibut candy.”