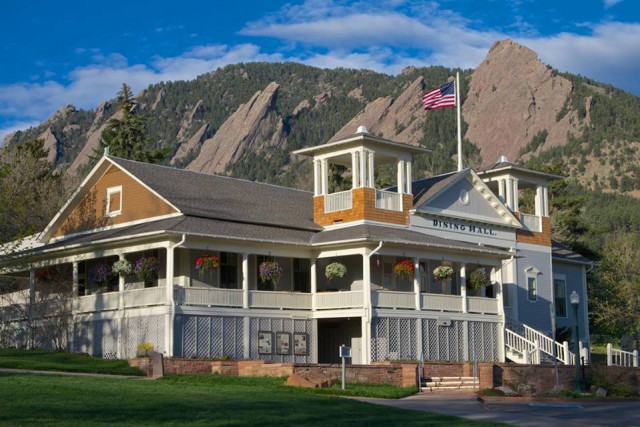 In some ways the Chautauqua Dining Hall might be to Boulderites what the Statue of Liberty might be to New Yorkers. Sure, you know it’s there, but you may not venture out there that much unless you have out-of-town visitors or are obligated to attend a special event. Personally, I felt I was due for a visit, especially after I learned this venerable spot was under new management.

The folks from Three Leaf Concepts, the same outfit that runs the Dushanbe Teahouse, Leaf and the Huckleberry, among others, took the reins here this past spring. They’ve spruced up the interior, but not so much as to detract from the space’s considerable historic charm. Many of the new details evoke the Golden Age of railroad travel and include at least one toy train (those things are like catnip to me), and reclaimed boxcar flooring serves as the bar counter.

However, friend Sara and I didn’t spend too much time taking in the inside dining space, as we opted to dine al fresco on the wraparound porch. We had arrived on the earlier side for weekend brunch, and it’s worth noting that this eatery doesn’t take reservations for seatings after 9:45 a.m. for this popular meal.

In addition to the interior, the menu’s also been refreshed, and brunch offerings are split between breakfast and lunch options. Egg dishes like skillets and Benedicts, including a veggie version, abound, but there are also plain flapjacks and tofu scrambles. Lunch choices include flatbreads (we used to call them pizzas), salads and sandwiches ranging from a vegetable mushroom burger to a Reuben featuring corned bison.

Sara began with a familiar beverage, a $3 chai from the Dushanbe Teahouse, a mellow blend of dairy and comforting spice. My $2 house coffee was a dark, full-bodied blend, which is how I prefer my java when relishing a hearty meal.

Incidentally, if I let the attentive waitstaff refill my cup each time they asked, I probably would have speed-climbed each Flatiron like a crazed weasel. Instead, I stuck around to split a $3 house Danish, berry-filled with a pleasantly flaky texture, and much more palatable than an overly sweet supermarket analog.

My $11 corned buffalo hash arrived attractively presented, a generous heap of potato, surprisingly tender pulled meat, and peppers. Atop it were two impeccably timed sunnyside-up eggs with a slightly giving white and correctly viscous yolk. However, a surplus of salt made it difficult to fully appreciate the meat’s flavor.

Consequently I spent more time focusing on my fresh and attractive side of blackberry, melon and strawberry and hefty biscuit.

Sara fared much better with a $9 Caprese omelet, a rolled omelet stuffed with fresh basil and vibrantly colored heirloom tomato. The eggs were thin and light, evoking, as Sara noted, classic French technique. But what blew both of us away was the impossibly creamy soft burrata cheese that served as both addictive topping and filling.

Over-seasoned hash aside, I’d say current quality and service justify a visit to this venue by even the most jaded Boulderite. Our tab came to about $30, which seemed reasonable given the dramatic setting. Certainly a meal here can be half of a quintessential Boulder experience, combining both brunch and a vigorous Chautauqua hike.