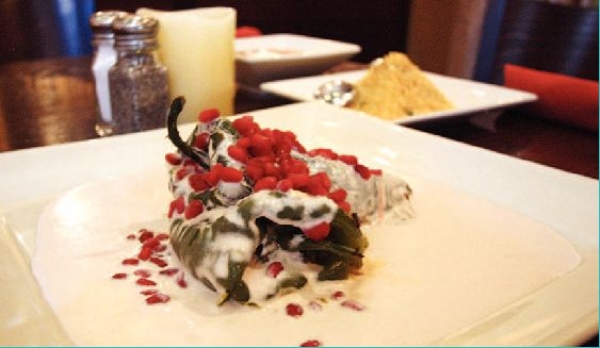 While most local Mexican restaurants are affordable familystyle venues, there are a handful of restaurants in this genre gunning for something rarefied. These locales up the ante with memorable ambience, a gourmet versus utilitarian experience, and prices to match. Boulder’s Agave Mexico Bistro and Tequila House ably fits this description.

Agave’s interior wears its aspirations on its sleeve. A beautiful brass-toned fireplace is the understated centerpiece of the contemporary main dining room — no kitschy strings of chile pepper lights here. As we were seated, friends Ray, Isolde and I were struck by the sleek cosmopolitan bar, its bright white shelves lined with pricey pours of tequila and a flat-screen TV.

At first glance, the menu doesn’t appear all that different from most other Mexican joints. There are obligatory staples like rellenos, tacos, tamales and the tampiquena combination plate of carne asada and enchiladas. But upon closer perusal, one can’t help but notice a number of aspirational choices such as guacamole prepared tableside and seafood-stuffed tamales. And then there are the prices, which hover around $15 for entrees, a far cry from a bargain family restaurant combo platter.

Ray, feeling peckish, ordered two entrees, a $13 chile con arroz and equally priced fish tacos. Each was entirely satisfying, and the chile consisted of a tasty but not-too-spicy pepper that was pleasingly tender and stuffed with fluffy rice. But what really made this chile stand out was an unexpected tomato sauce. This wasn’t the typical ranchero or pico de gallo, but a rich, almost bisque-like concoction that resembled a satisfyingly thick soup you’d encounter in a fine dining establishment.

The fish tacos possessed a clean, delicate taste and crisp garnishes. It’s worth noting that Agave prepares its tortillas to order, and the fresh nature of these wraps further enhanced this Bajainfluenced classic. These tortillas equaled good homemade versions shaped in a press and cooked over a heavy cast-iron frying pan. The benefits of this just-intime production method include a lack of the sogginess sometimes found in restaurant tortillas held in a covered container, and a firm but not rubbery texture.

Isolde’s $13 shrimp tamales weren’t something you see every day, and Agave does a fine job of executing this selection. The shellfish had a pleasing consistency and savor that nicely played off the cornmeal in a fashion reminiscent of a good bowl of Southern shrimp grits. Speaking of carbs, rice and black beans are in separate square bowls, and while I encountered a clump of dry grains, the beans were pleasingly firm without the leaden (or should that be larded?) qualities of the usual refried side.

My $14 chicken mole was one of the better examples of this dizzyingly complex preparation. The ingredient list for this savory-yet-chocolate-scented specialty can easily exceed two dozen elements, and balancing these tastes is a chef ’s challenge.

Some mole sauces are unpleasantly bitter, while others resemble Hershey’s syrup. Here the flavors melded together harmoniously, and the sauce served as a first-rate complement to the moist and tender poultry.

The food quality here matches up to the prices, although it may still be a bit of a psychological leap for some to pay the extra expense, given cheaper alternatives. But then, one will miss Agave’s laudable attempts to transform familiar fare into something greater.

Back to the shack

Returning to the idea of lower-end Mexican fare, I recently returned to the La Choza taco stand at 3365 Diagonal Hwy.

My
mission was to satisfy my curiosity regarding the $2.75 Mexican hot dog
and to see what distinguished it from a Chicago frankfurter. No
cardiologist would endorse this choice, but it’s a consummate guilty
pleasure. Start with your typical hot dog and beef it up with a dollop
of refried beans. Add a generous ration of grated cheese and sliced
jalapeños, and end with the smoky piece de resistance — a couple of
strips of bacon. Now that’s good eating!