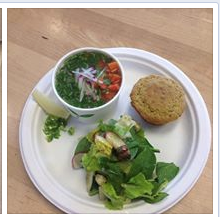 There’s no way around it; with its efficient combination order-counter/steam-heated prep line, brightly colored walls and easy-clean tile floors packed into a strip mall unit on Arapahoe Street, Yellowbelly looks just like a fast food restaurant. And the contents of the $9.95 Fried White Plate could cynically be described as chicken strips.

But slandering Yellowbelly as KFC-esque wouldn’t hold up in a food court.

Because while Yellowbelly harnesses that uniquely American approach to dining and decor, the Vail-based chain makes items generally relegated to a bad supermarket deli a proud personal choice, rather than a sad admission of defeat.

Co-owner Barry Davis even told Vail’s SneakPEAK outright that his aim was to make fast food natural and gourmet, to do for chicken what Chipotle did for burritos.

One of the places it’s most obvious is in the chicken strips. Excuse me, “Fried White Meat.” The gluten-free batter is light and peppery for a flaky texture, instead of a rock-hard crunch. The breast meat contained within comes from chickens as free-range, vegetarian and local as a CU sociology major. Fried white indeed. The combination is a tender and flavorful delight, especially dipped in the sweet and smoky house barbecue sauce. The fried white is available as a side for $3 or with two sides and a drink for $9.99.

Chicken is also available as a roasted breast-wing combo, a roasted leg and thigh, or a fried leg, all on the bone and available a la carte or as a combo plate.

A small ramekin of vinegar thick with chopped onions and hot peppers offered with the roasted chicken is a tangy, spicy delight, but the chunkiness of the slurry is awkward to dip into, especially when the chicken is on the bone. Better to use it as a spread, even though spreading liquid can be a struggle against physics.

Another place the classy fast food vibe is obvious is the drink selection. To the left of the register is what on first glance appears to be one standard-issue soda fountain. Except the sugar-water contained within isn’t Coke or Pepsi products, but six selections from Boylen’s, a small-batch artisan soda maker out of New Jersey that is rarely found outside of upscale grocery stores and is made with natural cane sugars instead of corn syrup processed straight from Satan’s cornhole. Pro tip: cut the cream soda with a splash of black cherry for maximum effect.

And then there’s the sides. Yellowbelly offers a take on fries (smashing the ’taters first) as well as a nice citrus quinoa and a rotating selection of seasonal veggies like beets, greens and cucumbers. You can also choose Brussels sprout slaw or a truly delightful serving of fresh-baked mac and cheese.

Salads, generally a laughable concept in fast food, are also on the menu in stellar form, featuring spinach and baby kale dressed up in roasted carrots, dates, toasted pumpkin seeds and more.

You can also get a full rotisserie chicken or large order that totally doesn’t come in a bucket to feed whatever hordes you may be associated with.

That’s not to say classing up a fast food joint is a flawless formula. One of the reasons tiles are made easy to clean is that they’re like velcro for whatever diamonds are on the soles of your shoes, making for a nearly muddy floor near closing time in wet winter weather. A dining companion of mine also took issue with the fluorescent lights harshing her yellow (belly), proving that sadly, not quite everything in the fast food system can be foodified, even if a restaurant locally sourced their bulbs. But get it to go like a true American and your problem is effectively swept out of visibility just the way the Founders intended.

But even bathed in the fluorescent hell of electrically-excited mercury vapor, Yellowbelly is a delight because of its overall approachability. Typically to get a good meal, you have to plan ahead, be seated, peruse a menu and probably wear pants. You can easily stroll into Yellowbelly on a whim and eat something delicious, relatable and affordable all while dressed like you live in Boulder. Unlike adding fries, a drink and a movie tie-in toy, that’s a winning combo.