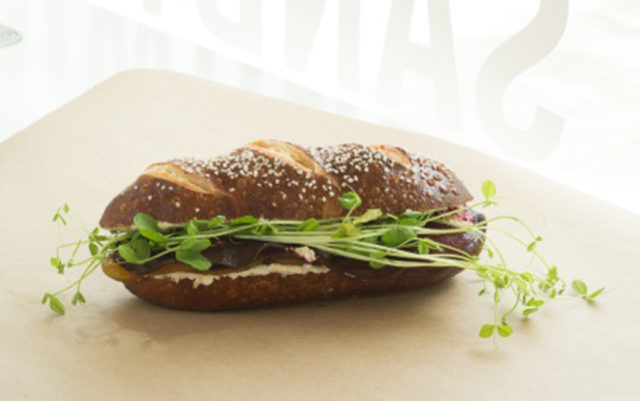 The seed of what would become Organic Sandwich Company was sewn in the wilds of Michigan, where Marcy Miller and her three sibling spent their days pulling root vegetables from the family garden, drinking water from hoses, and pretty much rolling around in nature. It was dirty business.

“My sister and I learned to cook from my mom by helping her, and eventually we took over the duties,” Miller says. “We would do a lot of entertaining. It was always fun to flip through cookbooks, dog-earing pages, picking what you’re going to make, going to the store to get ingredients for what you’re going to make. It was fun to see how people enjoyed our cooking.”

But there was a hiccup: Miller became a vegetarian. She didn’t quite know it then, but that decision would help her become familiar with the organic ingredients now on the menu and in the sandwiches at Organic Sandwich Company in Boulder and Louisville.

“While my mom cooked plenty of vegetables, it was very meat and potatoes growing up in Michigan,” she says. “So I branched out in order to try different and new fun vegetarian recipes.”

What her family also gave her was an entrepreneurial spirit, one that is certainly heartened this week as Organic Sandwich Company celebrates five years. Miller and her sister knew they wanted to start a business, and even zoned in on a sandwich shop concept, but 15 years ago, it was hard to make the financials work.

But when Miller moved to Boulder with her own family, she saw an opportunity.

“The world had kind of progressed in terms of organic food and pricing,” she says. “Boulder’s a very farmer-centric county and I started putting the numbers together and I said, ‘I think this could work.’”

Working on a business plan at Trident with a cup of coffee was not only “a reprive from the kids” but valuable in setting the mission for Organic Sandwich Company: serve sandwiches made of high-quality, organic ingredients (local whenever possible) that don’t cost an arm and a leg. She applied to the food business incubator that is the Boulder Farmers Market, got a spot, served a menu of three sandwiches and, realizing the potential, made plans to open a brick-and-mortar spot, which she eventually did on Pearl Street.

Developing the enlarged menu was a process of trial and error, building connections with local farmers and asking her meat-eating friends for feedback.

People would tell her, “You’re a brand new entrepreneur, you have no idea what’s going to happen.” To which she’d respond, at least in her head: “I don’t think it’s easy. I’m not afraid of hard work. I’d rather try my lifelong dream and fail then never have tried and look back on my life and go, ah, I wish I had done that. You gotta do it otherwise you’re going to have regrets, and I don’t have any regrets.”

There were a few other options to open that first shop, but the City-owned 940-square-foot shop on Pearl with high ceilings ended up being fortuitous: it’s manageable, highly trafficked, with affordable rent and is bright, airy and spacious.

In order to keep the costs low — you can’t charge $15 for a sandwich, Miller says dryly — the early Organic Sandwich Company team put in hours of sweat equity without compromising the premise on which the shop was built.

“I mean if people can’t afford your sandwiches you’re not going to survive,” Miller says. “Our food costs are higher than most companies. I’m incredibly frugal everywhere else to try to make up for that. My first year I was bringing towels home and washing them, washing our own windows and so when we hired a towel service I was like, ‘We really arrived!’ When we hired window-cleaning service, I was like, ‘Things are really looking good.’ Everything I was afforded [as an excuse] to give up… It just makes you appreciate it that much more.”

The Farmers Market, in addition to giving Miller her business sea legs, also helped foster connections to local farms like Buckner Family Ranch, which provides beef and pork products, and a number of farmers and producers who supply the shop with produce and other foodstuffs — Altan Alma Farm, Haystack Mountain, Aspen Moon Farm, Kilt Farm and many more. The Organic Sandwich Company outposts also sell a number of products from local food businesses — Rowdy Mermaid, Upstart Kombucha, Savory Spice Shop, Breadwords and others.

“I am a huge fan of supporting the local entrepreneurs. I’m the easiest sale in town,” Miller says. “Is it local? Is it organic? Sure.”

Even with its expansion to Louisville, Organic Sandwich Company is keeping costs low and quality high.

“We haven’t raised our prices in five years. Our prices are similar to places that don’t serve near the quality food we do. They same farmers that are dropping food off at Organic Sandwich Company, they’re dropping it at Salt and Frasca. Why does a sandwich need to be made of crappy ingredients? I don’t think that needs to be the case.”

And it’s those quality ingredients that have driven a menu of familiar sub shop staples like ham and cheese (local cured ham, gruyère and honey mustard on a pretzel loaf) and roast beef (local grass-fed beef with aged white cheddar and fresh horseradish aioli) as well as unique, satisfying vegetarian and vegan options like the Beetnik (roasted gold and red beets and housemade almond feta on a pretzel loaf) and a chickpea salad sandwich.

There are also weekly specials developed by the staff and, to celebrate five years in business, they’ll be adding some of the most liked specials to the permanent menu and putting out a call to the community to help develop new offerings.

“I have to say, it’s so humbling and amazing to be a part of this Boulder [County] community as a business owner because people understand the importance of supporting small local businesses, and I’m so appreciative of that fact,” Miller says.