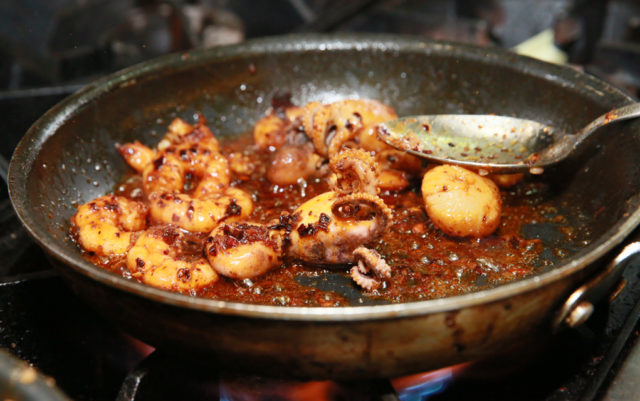 If you are in Kansas City, be sure to visit Jax Fish House. You can grab lunch at The Kitchen Next Door when you are in Memphis and at Snarf’s Sandwiches in Austin. In Denver, you can dine at Zoe Ma Ma, Lucile’s Creole Café, Pizzeria Locale, The Post and Acorn. Across the United States you can sample the fare and suds at Old Chicago, not to mention fast casual establishments like Noodles & Company.

These Boulder-born restaurants and other establishments have been steadily exporting themselves for decades into other Colorado cities and beyond. If you include natural foods products like Celestial Seasonings Tea, Justin’s Nut Butter and Rudi’s Bread and retailers like Lucky’s Market, a small city on the edge of the Rocky Mountains has had an absolutely supersized influence on the taste of the region and country.

Meanwhile, very, very few Denver and other out-of-town restaurateurs have successfully conquered Boulder. Over the years Boulder is where national chains come to fail. According to Edwin Zoe, the owner of Boulder’s Chimera and Zoe Ma Ma (with a second location in Denver), the reasons speak to Boulder’s distinctive character.

“Boulder is a small community that has a very strong sense of supporting local businesses. It makes Boulder a great incubator for unique food concepts that allow them to expand to other places. It’s harder for out-of-town chefs to bring a concept to Boulder because the diners have very high expectations,” Zoe says. He points to Denver-born Snooze as an exception to a large group of restaurants that weren’t able to make a go of it in Boulder.

Zoe waited until Zoe Ma Ma, which serves Chinese street food dishes, was established for five years old before launching a spot in Denver. “It was accepted in Denver right away and has done really well. It takes some education because our food is a change from typical Chinese-American food,” he says. Next up is likely a third location of Zoe Ma Ma in Fort Collins, another community with a strong sense of local identity.

Among the prime examples of Boulder-born eateries that have successfully exported themselves:

• The Big Red F group started with the Zolo Grill and has grown to include 13 restaurants including Jax Fish House, the West End Tavern, Lola, Centro and The Post located primarily along the Front Range.

• The Kitchen has spawned Next Door American Eatery with four Colorado locations and one each in Tennessee and Indiana and others in the planning stages.

• OAK at fourteenth has three offsprings: Acorn at The Source and Brider in Denver, and the new Corrida in Boulder.

• Chef Radek Cerny, who has operated numerous restaurants in Denver and Boulder including the European Cafe, has expanded his successful L’Atelier to Denver, as Atelier by Radex.

• Local breakfast-lunch favorites including Tangerine, Dot’s Diner and the Walnut Café have expanded in Boulder County. Lucile’s Creole Café has locations along the Front Range and Moe’s Bagels has expanded into the Denver market.

• Comida, which started as a Boulder-based food truck, has moved to Denver at The Source and the Stanley Marketplace.

• Mountain Sun Brew Pub started on Pearl Street and added Southern Sun and Under the Sun in Boulder before opening brewery-eateries in Denver and Longmont.

It was a genuine joy to come home to Sushi Zanmai, 1221 Spruce St. It had been a few years since I’d sat for sushi. When the restaurant opened in 1987, I was a sushi rookie and learned a lot about raw fish and Japanese food from Maki and friends. We were seated at the same table where my son got introduced to flying fish roe and raw quail egg sushi two decades ago. We loved the maguro, hamachi, ebi, unagi tamago, a galaxy roll and great service starting with the hot, damp towels.

“Americans can eat garbage, provided you sprinkle it liberally with ketchup, mustard, chili sauce, tabasco sauce, cayenne pepper, or any other condiment which destroys the original flavor of the dish.” — Henry Miller, American writer (1891-1980)