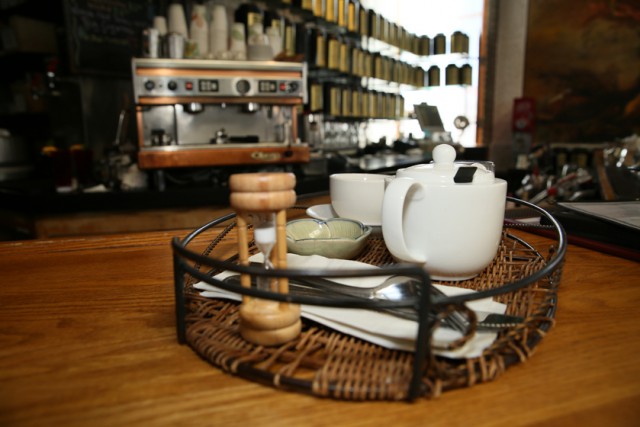 For some, having a quick cup of tea means stimulating or consoling the senses by breathing in the tea fumes before slowly sipping it down. For others, tea is a lifestyle. But at the 15th annual Rocky Mountain Tea Festival happening this weekend at the Boulder Dushanbe Teahouse, everyone can get together to celebrate the Camellia sinensis plant.

“From that plant you get white tea, green tea, black tea, oolong tea, and then from those teas you can actually flavor them with different oils or different herbs, Connect or a combination with us of both, to create a different flavor tea,” says Lenny Martinelli, owner of Three Leaf Concepts, which runs the Boulder Dushanbe Teahouse. “There’s some boutique places in the United States and South America but really 99.9 percent of tea comes from Asia and Africa.”

The first tea fest put on 15 years ago by Martinelli and his wife Sara was meant to bring a higher awareness of international tea culture to Boulder. Industry leaders came out to teach workshops and hold tea tastings for customers interested in premium, loose leaf tea, and the event had such a gratifying outcome that it expanded into an annual tradition.

A full schedule of events can be seen at www.rockymtnteafestival.com, but Martinelli says the gist of the festival is to provide a place to get a “basic understanding of tea.”

Martinelli will host Saturday’s “Cooking with Tea” workshop at 10 a.m. where he will prepare dishes using different tea ingredients in front of an audience he also likes to feed.

“When I use tea as an ingredient I use it really as just another ingredient versus … trying to get a strong tea flavor out of the dish. Really it just helps create depth,” Martinelli says. “Although there’s one tea I do always like to show people how to use and that’s a Lapsang Souchong, which is a smoked tea and it’s a very versatile tea that people can use quite simply as an ingredient, as a rub, you know in barbeque sauce, stuff like that.”

For passers-by, Saturday’s free Tea Bazaar going on from 10 a.m. to 4 p.m. will include tea vendors like Boulder’s Ku Cha House of Tea and the “Silver Speakers” of the tea fest who will set up booths offering samples and selling Taiwanese oolong teas, Korean green tea, Indian and Chinese teas, and traditional and modern tea ware among other things.

The eight tea workshops that are set to run at different times throughout the weekend are $15 to register and will fly in international tea experts covering a plethora of hands-on tea topics. A few include “The Japanese Tea Ceremony, Cyanoyo,” “The Art of Tea Blending with Sara Martinelli,” “Traveling through India with Devan Shah,” and even “Tea Leaf Reading with Caroline Dow.” Martinelli is particularly excited for David Lee Hoffman’s seminar, “Rare Teas of China.”

“He’ll be the most well-attended of all of them because he was one of the first people to actually be able to go into China, probably 34 years ago, and actually bring tea out of China without going to the Chinese government,” Martinelli says. “His knowledge and understanding of tea is superb.”

For kids, Sunday’s “Children’s Teddy Bear Tea Party” held at 10 a.m. and 12:30 p.m. will spark imaginations as kid’s dress up in their finest tea wear and bring along a stuffed friend or doll to indulge in tea, scones, sandwiches and sweets. Games, activities and a photo area will also be available.

If nothing else the tea festival will aid you in finding a tea that you weren’t aware you would connect with so well.

“Oolong is actually my favorite tea to drink. So I’ll always drink oolong at anytime, but in the afternoon I like to drink white tea,” Martinelli says. “Your body naturally gets tired at that point. [White tea] enlivens your brain, it doesn’t jack you up like coffee would. It really is a nice refreshing, stimulative beverage.”