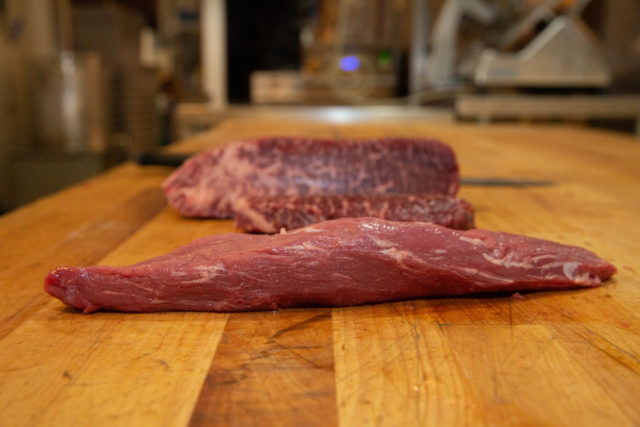 Despite the rise of Meatless Mondays and plant-, fungi- and cell-based proteins, we still eat a lot of beef, pork, chicken and other animal meats. There is clearly no shortage of burger-oriented Boulder eateries.

However, meat prices continue rising even as supermarket shelves are often empty of various cuts. That situation isn’t likely to change in 2022. The U.S. Department of Agriculture forecasts that beef and pork production might decline 2% or more this year.

One way to make meat more affordable is to step away from those expensive filets and chicken breasts and try some unfamiliar but highly tasty cuts and parts. Finding them is the challenge. It means forgetting the pre-wrapped jumbo packs and talking to a professional at a supermarket meat department or at an independent butcher shop like Boulder’s Blackbelly Market.

Behind the glass counter, Blackbelly’s head butcher Kelly Kawachi stands in a white apron deftly trimming yard-long oxtails with a razor-sharp knife. She worked her way up at Hosea Rosenberg’s Boulder eatery and market starting in 2015 and was named head butcher a year ago.

“There is a growing push among cooks and diners who want to know where their meat comes from. They appreciate knowing the source,”Kawachi says.

She notes that butchers use the whole animal, a much more sustainable and less wasteful approach that supports smaller, non-corporate ranchers and farmers.

However, consumers and diners must open their minds and palates, embrace the “nose-to-tail” philosophy and be flexible at a butcher shop. “Because we use the whole animal, sometimes we sell out of chops or tenderloin and I’ll direct customers to another cut,”Kawachi says.

When it comes to beef, there are myriad mysterious cuts.

“The last chuck shoulder we broke down we cut into 16 different steaks and roasts,” she says.

For steaks, Kawachi recommends asking for nicely marbled Denver steaks at half the price of ribeyes. “The bistro filet is similar to a tenderloin at half the price,” she says. The Sierra chuck steak is a toothier chew, but ideal for stir fry recipes.

For roasts, the culotte is an odd triangular cut with a thick fat cap that keeps it moist. “You slow roast it at 275 degrees and then sear on the stove,” Kawachi says.

You may not have heard of these cuts but you’ve certainly tasted them since they are mostly made into ground beef. “It’s kind of sad to see because they are so delicious,” Kawachi says.

Hardier but less pricey cuts include short ribs, shank and oxtail. They aren’t hard to cook, they just require more patience. “Those are set-it-and-forget-it cuts,” Kawachi says. Sear them on top of the stove until browned and then leave them in a low-and-slow oven for many hours to braise until tender and juicy. The bones make fantastic broth.

When it comes to pork, look past the chops and ribs for pork shoulder, Boston butt, and less expensive pork steaks, bavette and shanks,” she says.

Kawarchi admits that some of these cuts are more work to cook and eat but they are full of flavor.

Lamb has always been pricier than beef. “I love lamb chops, too, but lamb leg steaks are half the price. Lamb ribs are also great. Necks are amazing for stews,” Kawachi says.

Chicken is usually the cheapest animal protein but those prices are skyrocketing, too. Choose skinless, boneless thighs, which taste more like chicken than breasts, and best of all is buying a whole chicken: roast the carcass and bones and transform them into broth. Turkey continues to be the great stealth cheap meat most of the year.

There is a reason that the meat counter remains one of the few supermarket departments—outside of Starbucks and the pharmacy—where a knowledgeable person provides personal service and answers questions.

Buying meat from a butcher isn’t necessarily more expensive, but it is often the case, Kawachi says. There are good reasons why it’s worth the additional expense. You avoid the huge meat processing giants. If you are eating less meat, freshly cut beef, pork and lamb from a butcher simply tastes better. You have transparency since butchers know the ranchers and their practices. Butchers will also tell you from personal experience exactly how to cook the meat.

“People are scared of unfamiliar cuts, even how they look. Butchers can help them get out of their comfort zone if they are stuck in the New York strip, tenderloin and filet mindset. Let go and try something new,” Kawachi says.

Let’s raise a toast to the folks at the Boulder Public Library’s Seeds Cafe, which has closed after eight years of serving locally focused and sourced fare. . . . One of Colorado’s premier artisan smokers, Denver’s Owlbear BBQ, has closed. . . . Mono Mono Korean Fried Chicken has opened at 599 Crossing Drive in Lafayette, formerly U-Turn Brewery. It’s an offshoot of Aurora’s well-regarded Seoul Korean BBQ & Hot Pot and Seoul ManDoo in Aurora. . . . The cacao crew at Boulder’s Moksha Chocolate make experimental chocolate bars with different inclusions (like dried berries) that aren’t being produced yet. Those unique bars with hand-written labels are only available at Moksha’s Boulder factory shop.

“In January it’s so nice,

While slipping on the sliding ice,