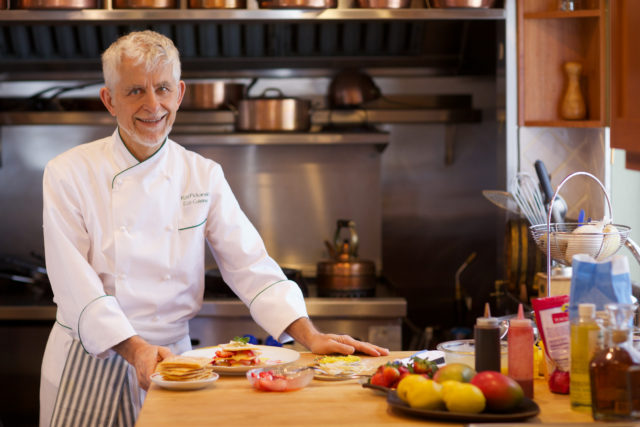 Ron Pickarski remembers the first time he made tempeh. It was 1976, and packaged meat substitutes were not only absent from grocery stores, they were, quite frankly, damn-near unheard of.

He was a freshly minted vegan (also an anomaly at the time) and, almost inversely, a classically trained chef certified in meat cutting.

He was also a Franciscan monk at the time. So it was in the kitchen of a monastery in Michigan where he cooked soybeans, shelled them, mixed them with a starter kit from a natural food store, pressed them into a pan and placed them in a warm oven to ferment overnight.

“I came back the next morning and it was just loaded with this white mold,” Pickarski says. “It did not look like something you’d want to eat.”

But sauté and eat it he did — and it was “unbelievably delicious.”

And so it went. Pickarski spent the next 40 years devoting his culinary skills to developing vegan cuisine, quite literally from scratch in those early days.

Over the years the Michigan native garnered international attention for his focus on vegetarian cuisine, assembling teams that crafted vegetarian dishes in the international “culinary Olympics” in Germany over the course of 20 years. They won gold in 1996.

That’s also the year Pickarski moved to Colorado. At the time he was working extensively with pulses — the dried seed of legumes, like beans, peas, chickpeas and lentils — to “bring them to the center of the plate.”

“That’s how I got in touch with the Colorado Dry Bean Council,” he says. “Most people think of pulses as a side dish that you put with rice. Nobody makes it a protein.”

So it makes sense that when the United Nations Food and Agriculture Organization decided to make 2016 the “International Year of Pulses,” Pickarski was one of 10 international chefs chosen to help spread the gospel, so to speak, about these dried seeds.

The idea behind the stately sounding “Year of Pulses” is to highlight just how valuable these little beans are to global food security, particularly with a population that is expected to hit 9 billion by 2050.

“The pulse is one of the most perfectly balanced proteins we can consume as a human,” Pickarski says. “We should be doing it regardless of whether the meat is available or not. We cannot be eating high on the food chain and supporting several billion people.”

But Pickarski’s lifelong devotion to veganism isn’t about animal rights or environmentalism, though he values those aspects. His culinary journey has been more about connecting with his own body, and helping other people make that same connection through food.

“It’s like an educational experience for me to teach people that one of the most basic relationships we have in our lives is with out body,” he says. “Learning how to eat and learning how we need to eat. It goes back to the pulses, back to a high complex carbohydrate, low protein, low fat, high fiber diet. That whole piece to me… I guess it’s really my journey in life. I guess that’s the way I’d put it: Creating culinary items to get people to embrace vegetarianism not as an alternative diet or animal rights or as environmental thing but as something we should be doing, not out of sense of necessity. How you impart that is to just create great cuisine to connect with it, because if people have to sacrifice the pleasure of the plate to eat this way then they’re not going to do it.”

Some of Pickarski’s recipes will be featured in a special Food and Agriculture Organization publication about pulses. While he’s not quite sure what else the U.N has in store, he has some irons in the fire, like working with the American Culinary Association to put together a pulse competition for professional chefs.

“When [the U.N.] brought me on board they got the whole package because I’m into pulses,” he says with a laugh. “I wanna take this opportunity to build a platform into the future, something to build on and every year we keep building on it. It’s like the culinary Olympics: when you get professional chefs involved, you get some really creative outcomes.”