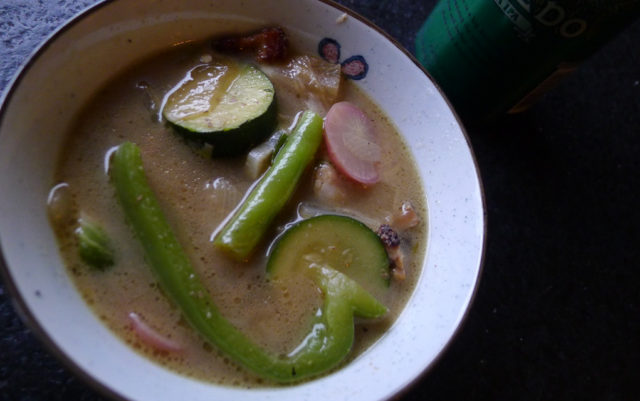 When food isn’t salty enough, we add salt, or salty condiments like soy sauce, or salty foods like bacon. If we need sweetness, we have an array of plant-based extracts and syrups at our disposal to turn it up. When we want sour, we have culinary acids like lemon or vinegar. And for umami, the likes of bone broth, fish sauce and cheese. Fat and spiciness have not (yet) officially been inducted into the basic tastes club, but many cooks treat them as if they are, adjusting those levels obsessively as well, like a sound engineer working an equalizer.

Bitterness, on the other hand, is the only officially recognized taste that is rarely tweaked — other than by adding sweetness in order to soften it. That’s a shame, because raising the bitterness levels can add intrigue to a dish, even if the eater doesn’t know what exactly is happening.

While the world of bottled bitters is yours to explore, if you are in a pinch, a can of India pale ale (IPA) is a good substitute. The distinct bitter flavor of IPA comes from hops, which contain high levels of a bitter compound called isohumolone. IPA was originally brewed with extra hops as a preservative, so that kegs of beer would survive the journey from England to India. The flavor caught on among beer drinkers, but we aren’t exactly born loving it. Quite the opposite, in fact.

Babies are programmed to avoid bitter flavors, presumably because many toxins are bitter. But despite this innate aversion, we also have the capacity to make peace with bitterness, develop positive associations with it, and even acquire tastes for certain bitter flavors — especially if they are attached to bitter materials that benefit us in a medicinal manner when ingested. Coffee and chocolate, for example, and of course beer.

Other foods, like salad, don’t act in overtly pharmacological ways. The incentive to eat a salad is more subtle than the urge to eat chocolate. But salad lovers can learn to appreciate the bitter flavors of the wildest greens, in part because your body sort of “knows” how good for you salad is, and you come to appreciate the flavor.

There is a beer bitterness scale, measured in units called International Bitterness Units (IBU), which quantify isohumolone levels. The IBU scale is currently a battlefield in a bitter arms race, analogous to the rush to grow the hottest pepper. The current record-holding bitter beer is called Alpha Fornication IPA, brewed in Canada by Flying Monkeys Brewery. It weighs in at about 2,500 IBU, but since the human mouth can only detect about 110 IBU, thousands of units of blissful bitterness go to waste with every swallow.

In an IPA, hops flavor is all that matters, so there is little downside to cranking up the bitter to such ludicrous levels. But there is a reason Midwestern beer brats are simmered in lager, not IPA. At 70 IBU, a typical IPA has seven times the hoppiness of a Bud. Because of this intense hoppy flavor, an IPA will be less forgiving to cook with than any other beer. But then a Lamborghini is less forgiving to drive than a Buick.

Just be careful. Add too much IPA, and the dish tastes like IPA, which isn’t what we want. The trick is to use less bitterness than can consciously be detected.

Perhaps counterintuitively, the more bitter elements there are in a dish, the more additional bitterness it can handle. The sharp, piney flavor of isohumolone can be softened by surrounding it with other bitter flavors.

The pungent bitterness of an unripe pepper, aka green pepper, bell, jalapeno, or roasted New Mexico green chile, goes especially well with IPA. But any stir-fried mix of garden or farmers market bounty offers a potentially diverse blend of earthy, bitter green flavors with which to complement and soften the hops, allowing you to add more, if you wish.

Here is a recipe for IPA green curry. Hot green peppers are the base of Thai green curry paste, which also includes other mildly bitter ingredients like lemongrass, ginger and galangal root. When there is curry paste, there has to be coconut milk, which also helps soften and absorb the hoppy bitterness.

The few spoonfuls of IPA aren’t needed until the very end, so you can keep the beer cold and closed until the finishing sequence, and then drink it with your curry. The cold beer quenches the curry’s heat, piercing the coconut milk sauce and resonating with the beer-flavored vegetables.

Even IPA haters will enjoy the curry, because it doesn’t taste like IPA. Curious cooks might want to save the leftover beer for a later batch of curry, or some other bitter-friendly dish. Keep it in the fridge as if it’s a bottle of hops bitters.

This dish is basically a garden stir-fry, to which curry paste, coconut milk and IPA are added. If you prefer to omit the coconut milk and curry paste, you can still add IPA to an onion-and-pepper-based garden stir-fry. Either way, the key to this IPA technique is to deglaze the pan with it when the pan is about to burn. Taste and deglaze again, until you just taste it.

Optional: protein (cooked and added according to your best judgement, if you wish)

Garden/market veggies like radish, zucchini, peas or beans, all cut and trimmed for the pan

With the pan on medium heat, add the oil or bacon and the onions. When the onions are translucent, add the rest of the veggies and the curry paste, and stir well. When the pan dries out and is about to burn, add a tablespoon of IPA, stir around, and taste something. If it doesn’t yet taste like IPA, add another spoonful. Add up to three or four tablespoons, tops. Then add the coconut milk, stir, and cook briefly.

This yields a thick sauce that coats the veggies. If you want something soupier, finish with 2 cups of water or stock.