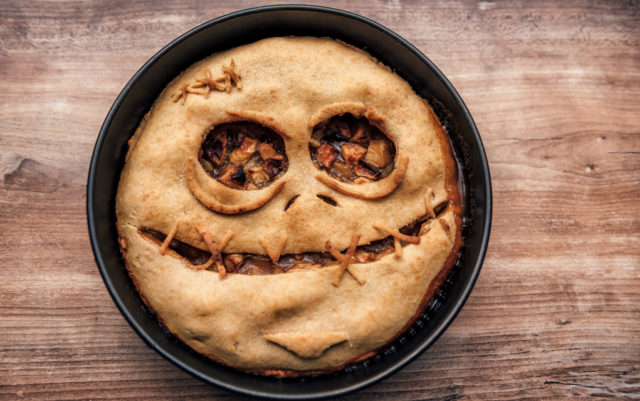 Once upon a dark and stormy night last week, I was consumed by the thought that food is as much about fear as it is love. I noticed how much of the food news I research is kind of creepy, how we treat food as medicine. While the following true food developments may not indicate the imminent collapse of civilization, they don’t sound appetizing. If you’re not scared, you will be.

• Open Foods 3D printed sushi adapted to each diner after careful analysis of their saliva, urine and stool samples.

• You got your lab-grown scallops. You can order plant-based sausages. Get ready for protein of the spores made from yeasts, molds and fungi and we’re not talking mushroom burgers.

An oral fixation: It sounds nightmarish, but Spanish researchers have built an electronic tongue that can differentiate between various beers, according to Forbes. Will it talk to Siri and Alexa?

Rising durian threat: Trust me, once you smell durian, you can never un-smell the huge Asian fruit. New York’s Mi Tea serves a durian mille-feuille cake. Here’s one reviewer’s take: “The cake’s aroma was repellent, to put it mildly. But its flavor I can only liken to a blend of onion, sugar, vinegar and limburger that has been fermenting in the sun for too long.”

Faster food now: As a fan of slow dining, I’m concerned about my fast food, drive-through brethren who had to wait an average of 20 seconds longer for their food in their cars in 2019 than in 2018, according to the QSR Drive-Thru Performance Study. That adds up over a lifetime. One cause is millennials ordering Whoppers using mobile ordering apps in order to avoid long, polluting drive-thru lines.

Bugging millennials: According to the Michigan State University Food Literacy and Engagement poll, 25% of Americans say they are willing to try foods made with cricket powder. Of these consumers, 40% are under 40 years old. Only 15% are 40 and older because, frankly, we ate enough bugs when we rode our bikes in the summer as kids. We don’t need insects in our pasta puttanesca.

HAL, make me an oat milk latte: After some unfortunate crashes, Bear Robotics is rebooting Penny, a robot restaurant worker that moves food and dishes between the kitchen and dining room. … A Houston Whole Foods Market will feature a Briggo robotic barista. Sonic Drive-In is testing ordering kiosks powered by artificial intelligence that will make personalized recommendations based on past orders. “May we pair Chili Cheese Tots with the gentleman’s usual Reese’s Peanut Butter Cup Blast?” … The dire pollinator crisis has spawned a tech answer: robot bee drones. (Or we can stop killing and poisoning the real bees.) … America’s cow industry has launched Chuck Knows Beef, an AI-powered expert that can provide home meat-eating answers. Chuck may or may not be involved with Siri and Alexa. Vegans have been known to argue with Chuck at chuckknowsbeef.com.

Cauliflower conspiracy: The great white vegetable is invading pizza crust, mac-n-cheese and pies. The slavish devotion to cauliflower suggests it may have addictive qualities. At Trader Joe’s, fully 6% of its customers buy its cauliflower gnocchi. To feed the habit, they visit the store 2.2 times more often than non-users and spend 6% more. Makes you suspicious.

Dysfunctional smoothie: The experts are predicting that beverages in 2020 will be enhanced with collagen, golden berries, mushrooms, probiotics, turmeric, nutritional yeast and CBD oil. They are not predicting that it will taste good.

The clock tower chimes 2:41: The average American thinks about food four times a day, with a full 40 minutes per 24-hour day spent thinking only about food. According to this study by One Poll, 2:41 p.m. is when your cravings and urge to snack strike the hardest. It worries me because I spend most of every day thinking about food as an occupational necessity.

Archivist Kate Gerard offers a free Nov. 13 lecture on the history of eating and drinking at Chautauqua Dining Hall since it opened in 1898. chautauqua.com … The Colorado School Nutrition Association is looking for students who aspire to be chefs to compete in a filmed mystery basket cooking competition. More info: http://ow.ly/Uzeq50wQAHB … Check out the Food and Beverage sections of Boulder Weekly’s freshly published Best of Boulder East County, a great roadmap to the growing culinary attractions outside the Pearl Street bubble. Our readers’ favorite new restaurant is Lafayette’s Teocalli Cocina, focused on regional Mexican fare including freshly made corn tortillas. See more results at: boulderweekly.com.

Hard-core farmers market people bundle up and show up for the last few, sometimes snowy and windy Saturdays. They face the reality that there are few opportunities left until spring to stockpile genuinely local apples, winter squash, meats, flour and other ingredients. The same is true of the drinking chocolate only served at the Fortuna Chocolate truck when it’s at the Boulder market. The drinking chocolate is a few precious sips of richness made with ethically sourced cacao full of nuances — some nuttiness, fruitiness — plums and orange peel, mainly, hints of tartness and bitterness all balanced by a little organic sugar. The market’s final day is Nov. 23. The last chance is the Winter Market Dec. 7-8 in Longmont.

“The cold truth is that family dinners are more often than not an ordeal of nervous indigestion, preceded by hidden resentment and ennui and accompanied by psychosomatic jitters.” — M.F.K. Fisher