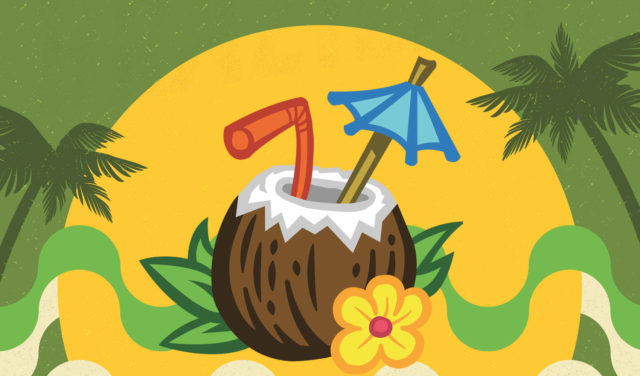 Consider the piña colada. An iconic tropical treat composed of cream of coconut, rum, pineapple juice and pulverized ice, usually served with a fruit wedge, maybe a little umbrella, maybe in a mug with Polynesian art on it. It’s fun, it’s refreshing, it’s delicious and yet think about where you might be able to get one in Boulder County this afternoon.

When did we all start taking cocktails so seriously? Plenty of beverage directors wouldn’t be caught dead having a piña colada on their menu because, why? It’s not high-brow enough? It’s a drink for cruise liners and Sandals getaways and Chili’s, but unsuitable for serious restaurants with serious beverage programs and serious drinkers?

No more. Jake Novotny and the team at Arcana want to make cocktails fun again, and they’ll do so when they launch Jungle, a tiki bar in the recently vacated PMG Wine space off Pearl Street in Boulder, on July 9.

“I grew up in Truckee, California, working in dive bars, fairly raucous, like cowboy bars,” Novotny says. “And that was fun because there was line dancing and people were having a blast. But then when I worked in these sort of speakeasies, like tie-and-vest bars, it was just like, ‘We’re going to be stodgy,’ and it just wasn’t what bars should be. It should be totally fun. I never thought that really good, dialed, high-quality cocktails and fun had to necessarily be separate, and tiki to me is perfect for that. Like how can you not be happy when you get a giant octopus mug with mint and shit coming out of it?”

Novotny was working at Wild Standard and Salt when he started formulating the idea for opening his own bar — “I was kind of working on my own business plan and, you know, the old bartender dream, like I want to open my own spot.” He moved onto Arcana about three years ago and shortly after making the switch, co-owner Elliott Toan prodded Novotny about his plan, a tiki bar in downtown Boulder.

“We’ve just been slowly talking, and we’ve been through some hurdles and down some roads and came back, but it’s been really fun to work with [Toan] and work with the group … to slowly tailor this concept to something that we think is awesome,” Novotny says.

But the guess is the cocktails will be the main attraction. Novotny says he’s put together a list that includes the staples — the aforementioned piña colada, and its cast-aside siblings the mai tai, zombie and painkiller.

But catering to tiki classics doesn’t limit the Jungle team’s ability to create. Novotny has built a menu of original cocktails that span the history of rum and borrows from global flavors in rum-producing nations.

One could go on an exploration of time and space via the Jungle menu. Start with the High off the Indo, inspired by rum’s origins in Indonesia, and made of Indonesian rum, banana, coconut cream, fenugreek and Thai peppercorns. Move to the Caribbean with The Belafonte, a concoction of Blanc Armagnac, pear William, Puerto Rican and Jamaican rum, ginger, cinnamon and Sparkling pear cider. There’s also the Don the Beachcomber, honoring America’s first tiki bar in Southern California opened in 1933.

Read the historic notes on the menu, or not. Jump around or follow the charted course. Novotny says the structure helped him develop the menu and might appeal to the curious drinker.

“First and foremost, we just wanted to make this tons of fun,” Novotny says. “But I love narrative cocktail menus that people can dance through and have fun and where there’s meaning to the drinks. I don’t want to impress that meaning upon [guests], so I tried to make it just like, if you want to check this out, cool.”

By sourcing rum from around the world, Jungle will be able to shed light on a spirit that’s often maligned as overly saccharine or considered to not have the range of other liquors. Sugarcane itself may not have the range of, say, grape varietals or the herbal components of gin, but inherent in the story of rum is the story of colonization, and the distilling methods brought around the world from European colonizers had a huge impact on the taste and quality of the rums produced in the islands on which they settled.

“When you go to Martinique, you have these French rums that are like really grassy and funky. And then if you go to Jamaica, they’re processed, they do almost like a sour mash type of thing. And they’re also made with pot stills. So they’re really rich and unctuous. And when you taste those two rums next to each other, you’re like, ‘These are different spirits,’” Novotny says. “In Venezuela they use a column still so it’ll be a little bit lighter. Column stills have a lot more copper in them and they can attract those heavy elements and pull it out of the spirit. To me Spanish-style or Venezuelan- or Central America-style rums are more akin to whiskey.”

Jungle won’t be the dive you’re envisioning if you’ve been to a tiki bar. You’ll be able to see your drinks and dining partners, for one, but in lieu of hacky shipping nets, flotsam and pirate-themed memorabilia, the Jungle team has created a space inspired by early 20th century Martinique — fresh plants, colonial fixtures and old rattan furniture. But even though the design’s tenor skews more Pearl Street than Bourbon Street, Novotny says it’s OK to let loose at Jungle.

“When you walk into a space, it needs to have the human element, it needs to be kind of dirty for humans to feel comfortable,” Novotny says. “We’ve bought all this cool Craigslist furniture that’s already kind of worn down, but like beautiful like rattan Martinique-style furniture that’s ready to be sat on. We didn’t reupholster it purposefully because I want you to be OK with spilling a drink on that. We’ll fix it.”

Novotny points out that more bars have closed in downtown Boulder than have opened in the last decade. That doesn’t reflect the desires of Boulder County’s changing demographics.

“We have all these awesome people coming in that are moving from big cities that have a lot of cocktail bars,” Novotny says. “They deserve to have more than one cocktail bar.”