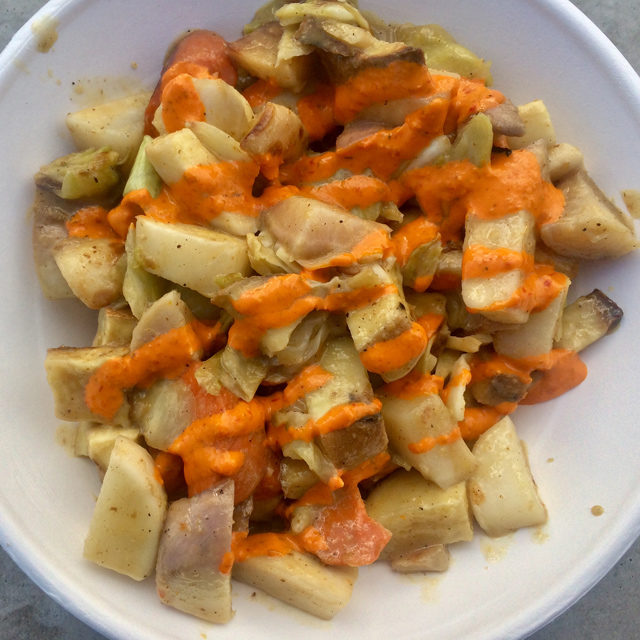 The mobile operation of Zeal serves up a rotating menu of the same types of health-conscious, vegan-friendly and delicious foods you’d expect from its brick-and-mortar shop. The truck’s recent creation of rainbow curry was a triumph of texture, color and flavor. Cabbage, carrots, turnips, sweet potato chunks, coconut and rice were mixed together, and we topped it off with the bright orange Diablo sauce. There’s bitter bites from the cabbage, sweet bites from the potato and savory bites from the carrot and turnip. The coconut melds it all together. It’s one of those vegan dishes that leaves both your taste buds and stomach satisfied. $10. 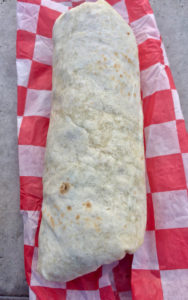 In Tuscany, there’s a regional delicacy called tonno del Chianti, or Chianti tuna. It’s not tuna; it’s pulled pork marinated in olive oil, resulting in a decadent, juicy, unctuous morsel of meat that resembles, well, tuna fish. There are American barbecue producers who get a similar moistness out of their pulled pork, but we hadn’t come across too many outside the Southeast until we stopped at Whitewater Wraps. What a surprise it was to find that same uber-moist, flavor-concentrated pork in the carnitas burrito. It’s shredded finely and rolled with lime rice, black beans, shredded cheese, salsa, radish and fine repollo slaw (a basic vinegar slaw). Altogether, it made for a magnificent bite, with the cheese providing bursts of rich fat and the slaw bringing pops of crunch, but wow, that carnitas. $9. 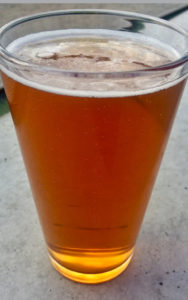 Oh, what joy. It is the season for brewers to turn their attention to German-style beers, Oktoberfest brews, and pumpkin ales and lagers. Malt gets put on its rightful pedestal this time of year. We decided to check out Prost Brewing, one of several Front Range breweries specializing in German-style beer. Its take on märzen is spectacular. It’s warm orange in color, and the nose invites a sip. Rich malt consumes the palate, and yet it finishes with a lightness that begs you to have another taste. Prost imports all its ingredients from Germany for the märzen (except the water), so drinking it might be the closest that those of us who can’t swing a trip to Munich this year will get to real Oktoberfest brew. Prices vary. 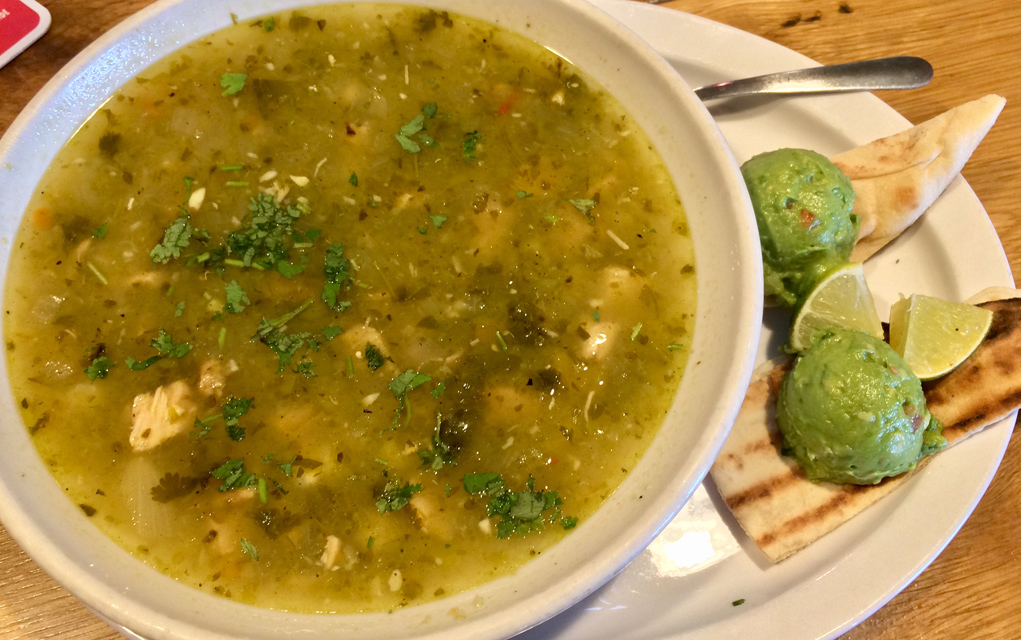 There are few restaurants that invoke the happy vibe that Oskar Blues’ locations do. The Longmont post is a great spot for afternoon or evening drinks, live music, lunch with the family or, in our case, a quick bowl of posole. The serving size is massive, and the bowl teems with savory chicken chunks and well-processed bits of hominy. Onions float throughout the flavorful broth, giving it a bright sweetness. The green chile in there will get you after a while, but sip on a craft brew and you’ll be back at it in no time. Served with grilled flatbread and robust guacamole, it’s a satisfying lunch. $5.50 cup, $8 bowl.