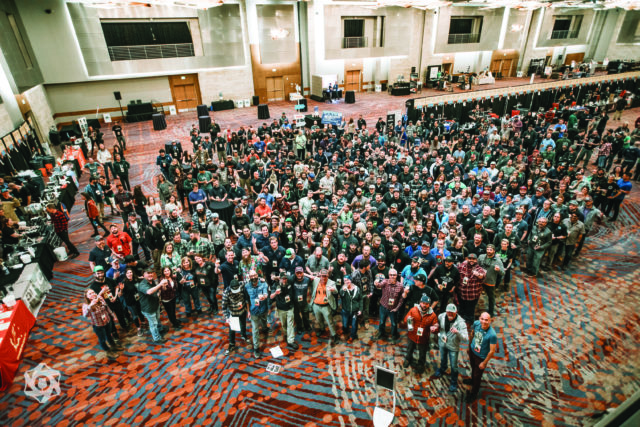 Back in 2020, the Colorado Brewers Guild (CBG) was set to host one of the Centennial State’s signature beer events: Collaboration Fest. One hundred and seventy-five brewers were slated to debut 115 brand-spanking-new brews, all made in the craft beer spirit of camaraderie, community and creativity. The date was circled on the calendar. The brews were fermenting away, and then. . . Well, you know what came next.

Like the rest of the brewing industry, the CBG took a pretty big hit during the pandemic. Festivals account for a large part of CBG’s funding, and none of that was coming in during lockdown. Scheduled for April 4, 2020, CollabFest was among the first festivals to hit the cancel button, and considering that CollabFest ushers in the many events of Colorado Craft Beer Week—including Colorado Pint Day—the timing was pretty rough. And for 2021, it was like that old Ramones song: Second verse, same as the first.

Well, here we are again. But the tune’s a little different this time around, and a beer festival this spring doesn’t seem like a pie-in-the-sky fantasy. So, on April 2, 2022, CollabFest returns to the Fillmore Auditorium at 1510 Clarkson St. in Denver. Wishful thinking? Maybe. But nothing happens until you put it out there.

As of this publication, nearly 70 breweries have signed up to participate in 2022’s CollabFest, with Boulder County sending Bootstrap, Fritz Family, Primitive, Westbound & Down, Wild Provisions and Wibby. Most of these collabs are still a mystery, but we know what Fritz Family will be bringing: Pilsner, “the type of Pilsner that brewers want to drink—something elegant and complex while staying true to the style,” Fritz Family told the CBG.

Not a Pilsner person? Worry not, because there’ll be plenty of stout on hand. Loveland’s Verboten Brewing and Barrel Project is teaming up with Aurora’s Ursula Brewing for an imperial stout brewed with chocolate, hazelnuts, walnuts and pecans. Sounds delicious. Meanwhile, up in Greeley, Weldwerks Brewing and Fort Collins’ Odell Brewing are joining forces with Little Man Ice Cream for a stout charmed with a magically delicious breakfast cereal—you know the one—and toasted marshmallow ice cream.

Then there is the media beer. Every year a local brewery invites area beer writers over to lend their hands and expertise (or, in the case of this humble writer, lack thereof) in brewing a beer. This year, the host brewery will be Denver’s Burns Family Artisan Ales, and the potential styles on the table include triple IPA, Russian imperial stout and Belgian quad (we writers gravitate toward the strong stuff). Which style will it be? Will it be the best of the fest? Will it taste overeducated and under-employed? You’ll just have to wait until CollabFest to find out. General admission tickets start at $65 and are available at collaborationbeerfest.com

If CollabFest is the opening day event of Colorado Craft Beer Week, then Colorado Pint Day is the centerpiece. This annual partnership between CBG member breweries and Grandstand Glassware celebrates drinking in the Centennial State. And on Wednesday, April 6, $1 from every glass sold on Pint Day will be donated to the CBG, and drinkers will have a chance to take the commemorative glass home.

The logo for this year’s glass honors the 125th anniversary of Colorado Parks and Wildlife, designed by Anna Long, CEO of Norlo Designs and graphic designer and marketing manager for Copper Kettle Brewing.

“I feel honored that the Colorado Brewers Guild is trusting me to communicate just how special Colorado Parks and Wildlife, craft beer and the state of Colorado are,” Long says in a press release.

“Just like the craft beer industry, it takes people that are passionate about their craft to keep it all running,” Long explains. “A Great Horned Owl represents the parks as they are found in every state park within Colorado, while a Park Ranger stands tall overlooking the land they so dearly protect. From walking the state parks to brewing the perfect pint, let us raise a glass in supporting those that keep Colorado wild.”

Roughly 100 Colorado breweries will participate in Colorado Pint Day. A complete list will be available at coloradobeer.org/colorado-pint-day/ as the date draws nearer.