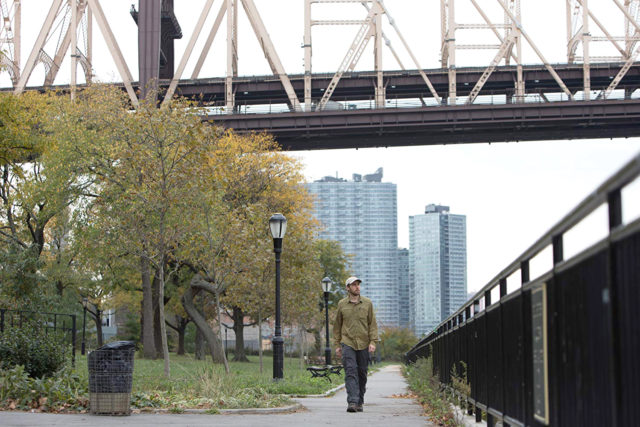 A still from 'The World Beneath Your Feet'

In 2010, Matt Green, a Virginia native and New York City resident, learned there were two Rockaway Beaches: the Queens neighborhood popularized by the Ramones in their 1977 single and one located 3,000 miles away in Oregon. Tired of a desk job and looking for an excuse to visit his brother in Chicago, Green packed a large stroller full of supplies and began walking. Five months later, Green strolled into Rockaway Beach, Oregon, with the northern United States under his belt. He was 29.

But 3,000 miles wasn’t enough, and Green wanted to keep walking. His new goal: New York City; every street, bridge and park in the five boroughs. It’ll take years and cover over 8,500 miles, but with a smile on his face and a flair for the wonder, Green laces up day after day to explore the city he calls home.

“Are you independently wealthy?” one New Yorker brusquely asks after Green explains his project.

No, Green is not wealthy — he lives on roughly $15 a day, couch surfing and cat sitting as he goes — but yes, as you can see in Jeremy Workman’s documentary, The World Before Your Feet, Green does benefit from certain entitlements. Neither Green nor Workman state it explicitly in the doc but Workman wisely includes an interview with Jamaican-born Garnette Cadogan, a fellow walker, who explains the pains he takes not to appear threatening or incur hostility on his walks. But Cadogan is black, and Green is not. And Green can, and does, walk up to everybody he sees with an extended hand and a happy grin. Some are fascinated, others need a few minutes to be won over, but the results are always the same: Green is a charmer.

What is Green’s purpose with the walk? It’s unclear, even to him. There is a corresponding blog — imjustwalking.com — where Green posts a myriad of pictures and a wealth of research. He’s still working his way through a vast backlog of material, which doesn’t amount to a book or anything Green can monetize.

“I don’t think there’s a whole lot of commercial use to it,” he tells Workman’s camera with a shrug.

The World Before Your Feet is both delightful and invigorating. It’s the kind of documentary that makes you want to lace up those sneakers and discover all the majesty just around the corner. And though Workman never explains what drew him to Green in the first place, it really isn’t necessary. To borrow again from White’s Here is New York, it’s that third New Yorker, the settler, who gives the city passion.

Green is all passion.