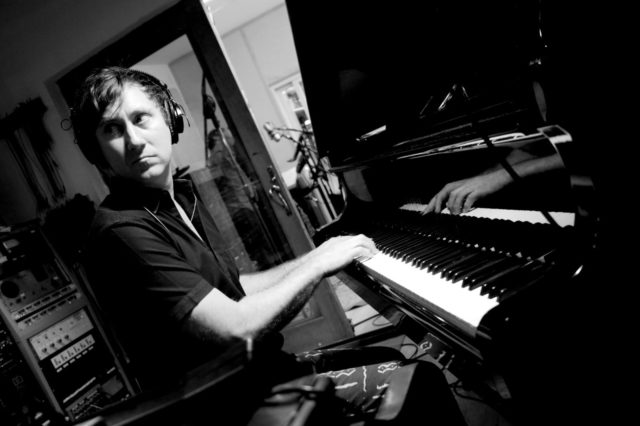 We’re not sure, but we suspect that Erik Deutsch is about the only working-age adult in North America who’s actually been enjoying this year’s pandemic home-detention sentence.

That whole, “Hey, cheer up, you have time to get caught up on home projects and maybe find a new hobby” meme lost its dubious zing for us about three months ago, to the extent anyone bought into it in the first place. To say nothing of those of us who lost jobs, fell sick or otherwise got bonked sideways like a lonely two-pin dispatched by that spikey little bowling ball.

Deutsch, though, is pretty much OK with it.

Well, to be fair, Deutsch had a few plans of his own derailed. We caught up to him by phone at his place in Mexico City a week or so ago, initially because we wanted to preview his EP-release gigs in Boulder and Denver with Leftover Salmon banjoist Andy Thorn, scheduled for the first week of December … both of which got axed, naturally. Or, at least postponed. But the music is still coming out.

“We’re going to release the EP, on vinyl,” Deutsch says. “A six-song EP. We released the single last week [“Tangled Sea”], with my wife, Victoria, and Andy singing. The concert was scheduled in August or September, and it was kind of wishful thinking. I think Colorado has been more aggressive in terms of planning musical events. It was exciting that we could figure this out and do the shows at Boulder Theater and Cervantes, but we always had it in the back of our minds that it could get canceled. So we’re going to reschedule for March or April.”

And Deutsch sees an upside to early spring, anyway:

“I’m excited about that for a couple of reasons. Y’know, traveling around the States this month just seems a little unnecessary. And reason number two, I really hoped to play more when I came to Colorado. And, just thinking out loud, the last time I was in Colorado was the New Year’s show with Leftover Salmon [at Mission Ballroom, marking the band’s 30-year anniversary]; that’s how long it’s been. I mean, I’ve been in Colorado just about every six weeks for the last five years with Salmon. Seventy-five days a year, more or less. So we were only able to pull together these two shows in December. Normally when I come, I’m going to teach a little bit, do some radio, play a house concert, maybe get up to Vail.”

The six-track EP, Tangled Sea, comes from a session last winter when Thorn and his wife, Cecelia, ambled down south to hang with Deutsch and his wife in Mexico City and give Deutsch’s home studio an acoustic-only recording workout. Instrumental save for the title track, the music bears a surprising poise, balanced deftly between composed and improv figures traded between Thorn’s marksman banjo and Deutsch’s rich piano. Flourishes of ’grass and blues color the proceedings, but the cumulative product is decidedly neither, a tantalizing hybrid that showcases both players’ virtuosity gently without showboating, leaving the listener practically crying for more.

Seems to us that banjo and piano make for a challenging pairing — both essentially percussive instruments, harmonically bound, whose natural intersection in a duo setting can be a challenge to reveal. Sure, Bela Fleck and Chick Corea did it successfully some years back, but it’s not necessarily an easy lift outside a band setting when both voices are playing into a collective. Creating something musically and aesthetically coherent in the spare confines of a duo, without leaning too heavily into familiar genre pathways, requires a little — a lot — of musical telepathy.

“The thing about a banjo and a piano is they can both be rhythmic instruments, but Andy has the ability to play lead, whether it’s melody or improvisation, and he can really sing and speak in that way,” Deutsch says. “I think most piano players are better as melody or harmony players than rhythmic players, but I do like playing rhythmically on the piano, and I think when it’s the right two guys, it allows you the chance to pass those roles back and forth.

“I think that’s what Andy and I realized together right away, when we were onstage with Salmon — I mean, we did about 400 shows together – and we would trade improv back and forth, which was a blast, and just became clear that we should try to do something together.”

So for now, the music will be coming out shortly, and a release party will be coming in a few months. The timing is a bit odd, though. After four-plus years holding down the keyboard seat in Leftover Salmon, an opportunity came up last winter that forced Deutsch to reluctantly step away from the band: a chance to tour with The Chicks (formerly Dixie) upon release of their new album, Gaslighter. Full-on tour, April to October. Arenas, press, TV. The works.

The call came via a recommendation from producer/songwriter Jack Antonoff, whose portfolio includes credits with Taylor Swift, St. Vincent, Lorde and a host of others, as well as being the former drummer for defunct indie rock band fun. and vocalist for Steel Train. At 36, Antonoff is one of the industry’s star producers, up for a Grammy this year. Deutsch himself has a lengthy career as a sideman on a lot of projects over the years — he thinks he’s played on over a hundred records — but if Antonoff calls for a gig like this, you take the call.

“I’ve been through enough nibbles and auditions for ‘big gigs’ that I can kinda tell… sometimes, some of those big gigs can be a little uncomfortable. I’ve been through some bad experiences and some good ones. This one had ‘good experience’ written all over it. Great organization, great people, fun, generous, good music.

“And at the beginning of 2020, the situation with Salmon was looking like we weren’t going to work as much, little bit of a crossroads for us, I think, and with a heavy heart… it was a tough decision, because Leftover Salmon really feels like my family, but I just felt like this was an opportunity I couldn’t pass up. And I hope it didn’t mean that it would be the end of my ability to play with Salmon.”

And then, of course, after an initial press push, the pandemic hit, the tour got postponed (“It’s definitely going to happen, but we’re just not sure when”), and everything stopped. For Salmon, for The Chicks, for everyone.

But maybe not so much for Deutsch. He and his wife moved from their Williamsburg apartment to Mexico a couple of years ago, with all their belongings and music equipment, including navigating the Byzantine paperwork and nail-biting logistics of moving a Steinway 2,700 miles across an international border, and has spent most of his downtime teaching himself home recording, having enjoyed the luxury of playing and recording in others’ studios for years in New York. His wife, Victoria Reed, an accomplished singer and songwriter, has been recording, having just signed to a Mexican label, and Deutsch has kept cheerfully busy.

“I’m an optimist by nature, anyway,” he says. “We’ve been in our apartment in Mexico City, getting proficient in our studio, having fun and collaborating with a ton of folk people I probably would not have been able to otherwise. I just did a track with Lukas Nelson, or a track he was singing on. I’ve been doing tracks with [avant singer/artist] Theo Bleckmann all year, someone who I did gigs and tours with, but never had a chance to record with. Victoria and I have been prolific together, we’ve been able to connect more with the scene here in Mexico… I released a 45 for a Brooklyn-based label, a solo piano improv thing, and I released my [pre-pandemic] live album Live at LunÀtico in May. And, I just did an MTV Unplugged thing in October with a Mexican band called Phobia. That will air in December.

“And, on the personal side, I haven’t had a break in 25 years, since Fat Mama… I hadn’t been in my Mexico City apartment, since we moved here in January 2019, for more than two weeks since we moved here. I was out with Salmon every 10 days or so.

“Like I was saying to Victoria, I just want to be home for a month. Y’know, put up shelves, eat tacos. Do cool things. Get some sleep.”