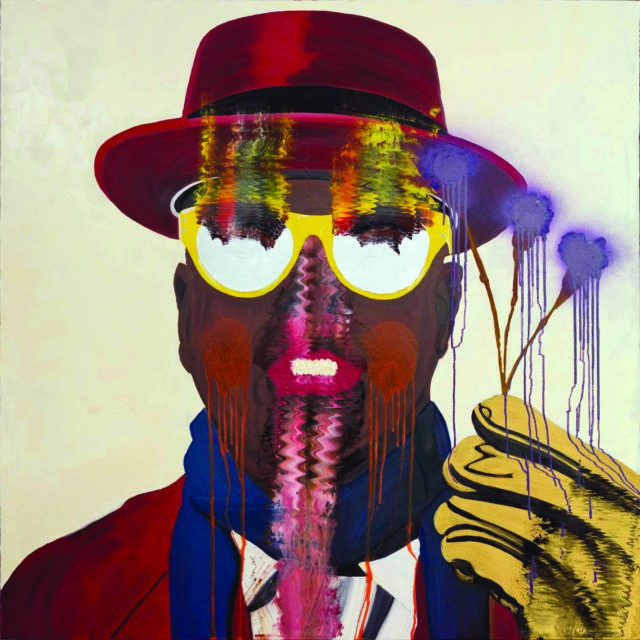 The Conifer resident’s abstract portraiture straddles the line between the real and surreal, taking the ancient art form that has recorded human existence for millennia and pushing it to the edge of recognition. Though Lucida wouldn’t say this himself, it’s terribly relevant to “these unprecedented times,” when a virus, police brutality and a gaslighting, image-obsessed president have made us question what’s real, what’s “normal.” What does normal really mean — and is it even something worth fighting for?

“I didn’t want the artwork to be illustrative,” he says of his portraits. “And by making it abstract I felt like it left an opening for the viewer looking at it. I didn’t want it to just be a painting of a person. I wanted to have some element to it, whether it was changing the colors or the structure or distorting it in some way, that would allow imagination to sort of expand.”

The Firehouse exhibition, Unusual Suspects, is catnip for the imagination, offering an initial stimulation that gives way to a sense of mellow calm. Based mostly on photographs Lucida took of various drag performers over several years, the collection revels in dynamic color and texture.

“I build the image up in layers of paint until I have a traditional rendering of a portrait,” Lucida said in a statement about the exhibition. “Then, I start to add additional layers of paint that I distort with various mediums, brushes, palette knives and homemade tools. This is the high wire event for each one of these paintings; as I push it towards the edge, I use my intuition as an artist to decide at which point to solidify the visual chaos at the desired moment.”

Like Philippe Petit, balanced 400 meters above New York City, Lucida only steps off the wire when he’s finished or it starts to rain.

“By pushing it too far, I’ve had to destroy some paintings because they just blew up,” Lucida says. “I lost contact with my artwork.”

The work in Unusual Suspects is reminiscent of the figurative work of 20th century painter Francis Bacon, whom Lucida counts as an inspiration. But unlike Bacon, who sought to render “the brutality of fact,” Lucida is less concerned with facts than he is with imagination.

“I prefer that [the viewer] take from it what they will,” he says. “I don’t mind explaining what the artwork means to me or how I made the artwork, but somebody else observing it is going to have a different interpretation of what that is based on who they are, their life experiences. I think the only thing that I hope they would see is that I’m trying to create a portal for their imagination that could lead anywhere.”

In most of the paintings, Lucida has left unaltered that most important portal to the soul, the eyes, giving the viewer a chance to connect with the subject, to look them in the eye despite the transmutations to their physical form. Those looking for further meaning might notice that most of the subjects’ mouths are rendered into river-like abstractions, sometimes flowing out of the painting. In some works, like “The Flower Peddler” (which Lucida created from his own imagination, not from a photograph), the river that flows from the subject’s mouth feels calm, as though we are standing at the edge of a metaphorical river of time that’s gently flowing toward us. In other paintings, like “Now It’s Over,” the flow can feel more chaotic, like an uncontrollable force of nature ready to consume us.

The two most abstracted of all the paintings ― “The Attendant #1” and “#2” — are self-portraits. Lucida created the paintings by taking photos of himself wearing a mask and creating multiple exposures. The results are mind-bending, like looking at a clown through a kaleidoscope. You could say it’s a comment on the masks we all wear, on the different faces we show in public and private, on how we see ourselves versus how others see us. But that’s your choice. Lucida admits he was going through a rough patch when he created the self-portraits, but he refuses to limit your journey by imposing anything more on the artwork.

Perhaps Lucida’s art is an escape from the chaos of the day, or perhaps it offers a way to process the chaos, to admit that everything is indeed chaotic and it always has been. These are not unprecedented times — this is just life. We make meaning of it by opening our minds and searching through the distortion.

“I’m well aware that my artwork is not accessible to everybody,” Lucida says. “I think it is hard for some people to appreciate. I understand that. I didn’t want to make corporate American art. I didn’t want to make art that could hang in the headquarters of Walmart. There are already a plethora of artists involved in making safe art. If somebody doesn’t like my art work or appreciate it or understand it, that’s their own prerogative. I’m not Moses. I’m not here to lead everyone through the valley.”