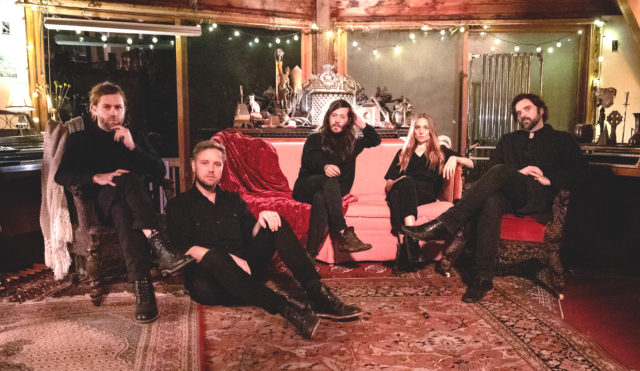 The sound of Other Lives’ new record, For Their Love, is the sound of frontman Jesse Tabish breaking through a prolonged period of depression.

The melancholy set in after the band released and toured around its 2015 album Rituals, a collection that pivoted from the orchestral folk that had typified the band’s previous work to a sound that hewed more closely to pop, drawing more on synthesizers and drums and leaning into post-production layering and effects.

But even in Rituals the sadness is evident. Though lush and colorful in its arrangements and production, the album is emotionally heavy.

The record came a few years after Other Lives spent a couple of months on the road opening for Radiohead on the King of Limbs tour, and while Tabish describes the experience as positive, he found himself wrestling with self-doubt in the wake.

“I don’t think I knew my relationship to music,” Tabish says over the phone recently. “You know, I can write a song every day. That’s not a problem. I can write music all day. That’s not a problem. But it was that real fundamental connection to my voice in particular and to the music surrounding it. I think it kind of triggered this feeling of where am I in the world? What do I want to say? What do I believe in? What’s my ethos?”

He found a new perspective with time… and a change of location. About two years ago, Tabish and his wife moved to an A-frame cabin in the foothills of the Oregon Coast Range where For Their Love was recorded.

“Aesthetically, moving out to this house and being back in nature, being back in tune with myself was really important to get back to some of the artistic ideals and music aesthetics that I had felt like I had maybe strayed away from,” Tabish says. “I had been working with computers for such a long time during the Rituals sessions and I really missed the physicality of music. I missed the band being in the same room, looking each other in the eye, really kind of digging into instruments. I wanted there to be this kind of rustic feeling. So much of that feeling kind of came with the setting that we moved into. It was kind of a missing link for me. It’s hard to describe, but it was just about getting back to me and a guitar.”

Don’t let the word rustic fool you: For Their Love is an expansive album built around Tabish’s most direct lyrical statements to-date. In a collection that could easily soundtrack a bitterly honest Coen brothers movie (or perhaps something darkly optimistic from the Paul Thomas Anderson oeuvre), Tabish returns to a foreboding sense of existential dread over and over. Tabish admits the 2016 election “kicked me into motion a little bit.”

“It paved the way for a certain sort of directness and plain talk,” he says.

The album opens by firing shots at the passive cruelty of wealth and privilege.

“And all you pretty ones, you’re sittin’ still / The gettin’s easy so have your fill / Well, nothing compares to the sound of your violence.”

It gets even more direct as it dissects the often militant, racially motivated brutality of police in “Cops.”

“I think for me a lot of this record is kind of looking myself in the mirror and going, ‘What are you made of? What do you believe? And if you do believe these things, come out and say it,’” Tabish says. “There’s still a tendency not to point the finger and say, ‘This is the way.’ I adore the [concept of music as] kind of a suggestion that is open to the listener to take on their own and move from there.”

Part of Tabish’s journey through depression was rooted in finding peace with his voice, both in the messages he wanted to share and in the very tone of his vocals. He’d taken on a falsetto for previous records that was becoming more and more difficult to maintain (perhaps because of years of alcohol and cigarettes, he admits with a laugh). So on For Their Love he found a register that was more natural, less Thom Yorke and more Matt Berninger.

“I really enjoyed singing on this record, which on previous records it really gave me great anxiety to record vocals,” Tabish says. “I can’t hit those high notes anymore and it didn’t feel good. It didn’t feel satisfying. And so I really made an effort to sing in the key that felt good when I was recording and it was a huge difference because I really looked forward to singing it as opposed to, oh god, I gotta record vocals today. It kind of propelled me forward, to sing out and say the thing.”

Tabish has always been open about his preference for seclusion, about the fact that he feels most connected to his muses when he can explore the vastness of silence and solitude. It’s part of why the cabin in the woods was able to create such a monumental shift in perspective for Tabish. He cites Herman Hesse as a guiding voice as he navigated his melancholy over the years.

“He’s one of those writers that embodies self-determination and the idea of humans trying to break free from these dogmatic ways of thinking or from these old, broken institutions,” Tabish says.

Hesse championed solitude as the way through, as the only way to take charge of our own destiny.

“We must become so alone, so utterly alone, that we withdraw into our innermost self,” he once wrote. “It is a way of bitter suffering. But then our solitude is overcome, we are no longer alone, for we find that our innermost self is the spirit, that it is God, the indivisible. And suddenly we find ourselves in the midst of the world, yet undisturbed by its multiplicity, for our innermost soul we know ourselves to be one with all being.”

For Their Love is proof that solitude can produce something that is deeply connected to the whole of humanity. One can only imagine what the solitude of quarantine will help Tabish connect with next.