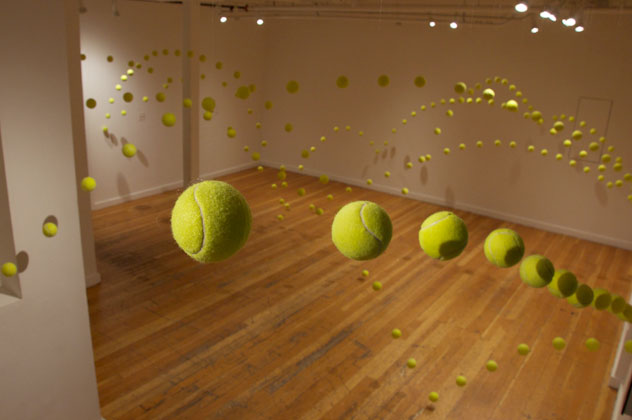 A basketball in the middle of the floor is a standing invitation — pick me up and give me a toss, it says.

And at the opening night for the Boulder Museum of Contemporary Art’s summer exhibition, Game Changer, people did. Then they turned toward the basket, took one look and realized that a single shot could shatter the hoop and backboard, formed by a circular fluorescent blue lightbulb and a vintage mirror.

“The artist really puts that out there, so at any moment, someone could pick it up and try to shoot it and ruin the work,” says Mardee Goff, associate curator of the museum. “You come to a gate and you’re sort of invited in if you’d like to come, but I think most people — we’ll have yet to see — will respect what it is, and understand that contemporary art is something that’s interactive … It can be something that we can engage with really immediately and then have the choice to make up our own mind for it.”

That’s an invitation that pervades the exhibition — join the team, as it were. Step on the field to play. But you’ll be provided with the useless equipment of heavy bronze ping pong paddles, baseball gloves made of steel and shattered glass, and even trophies made of trash.

This is a game of a very different kind. The aim of curatorial team Ruth Bruno and Cortney Lane Stell with Game Changer was to explore the topic of sports in art without hammering in a specific message, but to, as Stell says, bring “a plurality of visions to the exhibition. … It’s not about stating one thesis, it’s about really investigating how artists are engaging media, so I think sports is kind of the resting place of the exhibition.”

The two selected artists in tandem, texting images from art galleries to one another as they considered various entries in the topic. Their philosophy is of anarchistic curating — discarding a specific methodology and the idea of curator as author in favor of an image of curator as collaborator, and including sculptures made with found objects, paintings, photographs, video, even an audio-only piece.

Appropriately, Game Changer begins with the swing of a racket. Near the museum’s front door, 21 tennis rackets hang in sequence, sketching out the hit of an invisible player that sets off a tennis ball. From that starting line, hundreds of tennis balls ricochet through the museum in the graceful arcs of one bounce after another in Ana Soler’s “Starting Point: Causa-Efecto.”

Her creation wasn’t precisely diagrammed. Instead, she eye-balled her way through the museum as she installed the piece, using tape to mark off her proposed trajectories.

It’s an inexplicable magic drawn from the same ilk as a hitter who can point to where his home run is going to head, or a pitcher who can target just a couple inches of space.

The tennis balls lead the way into a gallery that opens with Catherine Opie’s quietly observed portraits of young football players, lined up with bright-eyed, unlined faces and narrow limbs dwarfed by the padding of their football uniforms. They were probably similarly dwarfed by their own ambitions, and seven years after these portraits were taken in 2007, it’s not likely any of them still plays football at any sort of competitive level. They stand in the shadow of what we know now about teenagers and tackle football — the concussions, the traumatic brain injuries — but to Opie, the portraits seem more invested in preserving a moment in time, of hope, possibility and American iconography. The same goes for her photograph of a game, which frames an idle moment in play in the classic icons of American high school football — the emerald grass, the glow of stadium lights — with the goalpost dominating the scene.

Devon Dikeou looks to another moment to examine the place athletes find in the modern age, presenting a series of black and white photographs of flags at half staff the day Joe DiMaggio died. No trace of sport exists in these images.

Alongside the explorations of athletes are investigations of the artifacts of sport — Denver artist Phil Bender’s grid of soccer jerseys and tennis racquets reduce both to base aesthetic consideration; David Adamo’s “Untitled” ping pong paddles, heavy, bronze and totally useless, like Alejandro Almanza Pereda’s glass basketball hoop, both encourage and render impossible the notion of play.

The ground floor gallery concludes with the more biting pieces in the exhibition, including Helmut Smits’ “Greenscreen,” in which he uses the green of the soccer field as a greenscreen and replaces it with video of commercials. Soccer players sprint over a field of ads for commercials, toothbrushes, videogames, makeup, fast food and cars, and the audio overlays a cacophony of sales pitches, sports commentary and cheering crowds. The message is clear as the players nearly get lost in the buybuy-buy, sell-sell-sell.

Smits’ original trophies of plastic packaging were unavailable, so Bruno and Stell approached him with the idea of allowing museum visitors to build trophies of their own, which now sit on shelves in the museum. They mock the idea of the rewards of competition, and yet alongside them is an artist-created instruction sheet for creating your own trophies that rates them by difficulty from “Maybe too easy” to “For winners!” Soler’s suspended balls bound their way upstairs — breaking the rules of physics once to make the leap to the second floor gallery, and finish the exhibition where it began with aesthet ics and intuition rather than rules and rankings.

“She thinks of it as a metaphor for life — a ball hits a wall and it goes a completely other direction,” Bruno says.

The second floor gallery space is filled with those lime green balls frozen mid-bounce, and they return viewers to that childlike delight, that spike of wonder at a “Look what I can do” moment, to the joy that has been, or should be, what draws us back, time and again as spectators or players, to sport.