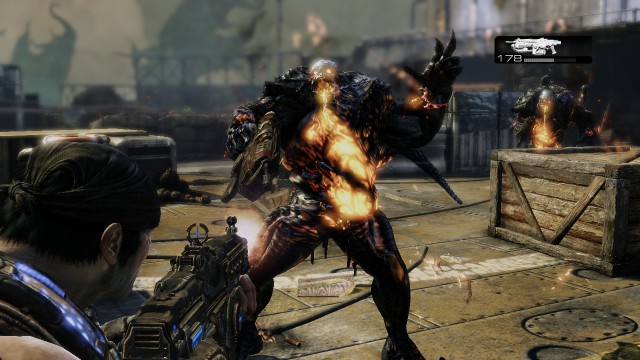 It’s been about three years since Gears of War 2
was released, a great and hugely popular game only on Xbox 360. The multiplayer struggled
at first, but it soon became so addictive that fans continued to play years after the game
came out. Now with Gears of War 3, the trilogy comes to an end, but the gaming
continues on.

In the single player campaign, the story begins with
the world in ruins. As if it wasn’t bad before, it’s even worse. Not only do
the humans have to deal with underground race the Locusts wanting to take over
the world, but also the Lambent-infected Locusts who are harder to kill and
explode when they die. The surviving humans blame the COG (Coalition of Ordered
Government), which is the main character Marcus Fenix’s crew, for this new
enhanced enemy and don’t take too kindly to Fenix and his cohorts when they’re
making their way through dilapidated towns and worn-down human strongholds.

Regardless, the COG have a new mission: find
Marcus’ dad. Thought to have been dead, Marcus’ dad is a scientist who
apparently has the solution to the world’s problems and can bring peace back to
the planet. Marcus and his crew just need to rescue him. And so the journey begins.

The world created by the Epic Games team is a
beautiful disaster. There’s so much detail in the post-apocalyptic cities, the
vast rocky terrains and the inside of mostly destroyed buildings that it pulls
you in. The art and animation of the characters and environment are the best
yet in a Gears of War title along with a soundtrack that swallows you into the
action.

The gameplay hasn’t changed much; the game system
still has one of the best cover mechanics in gaming. If anything, everything
just seems a bit more tightened and polished than previous games. The movements
are fluid and action nonstop, but for the most part if ain’t broke why fix it?
Instead, they add new weapons, like a gun that sends grenades underground and
new enemies that are bigger and badder.

What did get a lot of fixing was the multiplayer.
The matchmaking is working better, easier navigation and it basically plays
like the single player campaign. Horde Mode will definitely continue to be a
favorite where you and four other friends fight wave after wave of enemies until
you can go no more. And along with a handful of other modes, you’ll be playing
Gears of War 3 long after you beat the single player campaign.