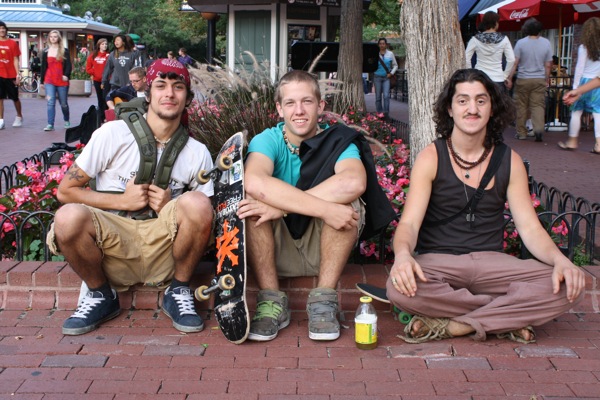 Boulder tends to attract superlatives. It’s been named the foodiest town in America by Bon Appetit. It’s routinely among the fittest, the smartest, most likely to succeed, best smile, greatest ever. But nobody’s ever complimented the City of Brown Woolen Sweaters on its style.

That’s why it was surprising that Fashion’s Night Out, a national event celebrating and encouraging good style, had a strong presence in Boulder. The Sept. 8 event was marked by a fashion show on the Pearl Street Mall, with models wearing clothing for sale across downtown Boulder.

The idea’s to get the public interested in fashion. In Boulder, that’s an uphill battle. GQ agrees: in July, the men’s fashion magazine ranked Boulder among the 40 worst-dressed cities in the country.

But heck, that was two months ago. And over 20 Boulder businesses participated in Fashion’s Night Out. Maybe things are starting to change.

Or, if you glance into the crowd at the fashion show, maybe not. Gym shorts, slogan t-shirts (the non-ironic kind, even) and Birkenstocks still abound. We wanted to know: Does Boulder really deserve to be ranked among the worst? And do residents even care?

The crowd at the show had mixed responses — though some might question the choices people made to wear to a fashion show. Seriously, what’s the deal with wearing giant keys on a chain?

Malcolm Moreno: “No, I didn’t know Boulder was voted among the worst. Every other major city has a fashion. Boulder is just hippie.”

Trevor Wakema: “In some parts, maybe Boulder’s rating is fair.”

Maria Roennau: “It depends on what you qualify as ‘fashion.’ There are lots of hippies who just throw clothes on, you know?”

Kara Delmonico: “Boulder is unique. It doesn’t have a fashion. It’s just relaxed.”

Todd Roe: “Yes, it’s fair. What’s unfair is that somebody rated this the happiest place in the country, and I’ve never met grumpier people.
“There’s a lot going on here in fashion. You’ve got hipsters, you’ve got yuppies, you’ve got outdoor excerise people who wear their outdoor stuff everywhere.”

Dylan Armstrong: “You know, we don’t care. Boulder dresses pretty utilitarian. It’s outdoor fashion. If I wanna just walk around in flip-flops I can do that. I don’t think Boulder is offended that we’re worst-dressed. It’s funny, Colorado being kind of a redneck state, Boulder doesn’t do that. You see cowboy boots on college girls, not grown guys.”

Blair Griffith, Miss Colorado: “I do not think it’s the worst-dressed city in the world. It’s the most creative, but in a good way. It’s not stiff. Everyone has a uniqueness. There’s a style here. You go to Denver, there’s no style.”

Ashley Wood: “Yes, Boulder deserves to be on the list. I think it’s because the priorities here are way different. It’s all about fitness and not what you’re putting on your body. It’s how your body looks.”

As for the worst fashion choice in Boulder: “I don’t think all the technical wear is the worst thing ever, it’s just the farthest from fashion you can get.”

Brandon Kolodziejczak: “I like how I’m dressed. So no, [Boulder’s ranking] is not fair at all. Boulder’s amazing. I love the place, everything about this town, city, whatever. It is gorgeous. To say the way someone dresses is out of fashion is ignorant.”

Trevor Moore: “It’s not right because with all the different cultures in this country, fashion is just very diverse. The way people dress is part of who they are.”

Anthony Ruffa: “I actually think it’s one of the top because people have freedom and liberty to choose. There’s no conforming to society here.”

Barby McKown: “You have to think ‘20.’ The fashion show is aimed at 20-year-olds. It’s a great town but everything in every store looks the same. This show is not going to upgrade their status in GQ.”

Rhita Pfleger: “What we’ve seen is pretty bad. It’s all for thin, tall 20-year-olds. The dress here is horrible. I’m not saying their clothing is bad, Maybe Atlanta is a preppy town and this is not.”

Kyle Woodward: “Really? Darn. We’re not doing too well. We need more fashion shows. It’s a college town so I expect college kids to be up to date, so the low ranking is a little upsetting.”

Ciera Baur: “Boulder dedicates itself to fashion that’s not necessarily current. Trends that have kind of passed. Although I guess there’s a chance they might come back, maybe.”

Rose Barber: “There’s a vibe in Boulder that doesn’t lend itself to fashion, so I understand the rating.”

Julia Reck: “I don’t think it encompasses everyone in Boulder, but I think it’s fair.”