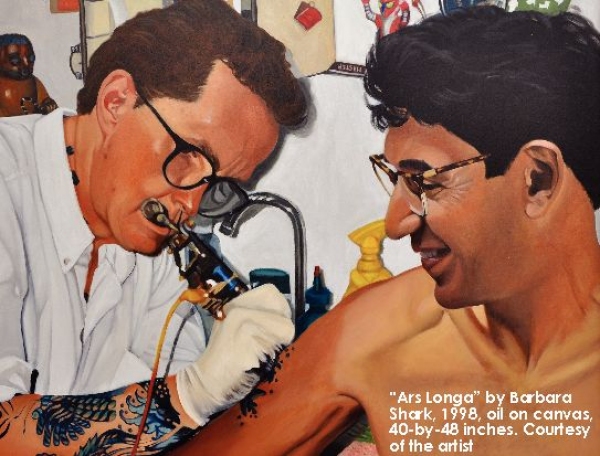 At first glance, the three exhibitions of Colorado artists at the Boulder Museum of Contemporary Art appear to share little in common. Yet as the viewer ascends from the first to third floor of the museum, encountering the succinctly divergent worlds of each exhibition on its own separate floor, an integrative sense begins to pervade the seemingly differing style, content and subject matter of the artists. It’s ironically suiting that the unitive theme shared by these very different exhibits is that of fragmentation.

The first exhibit, Edits, by Stephen Batura, is a series of large-scale paintings based on fractured images. Batura makes collages from fashion and design photography, then delicately recreates the collages with paint on canvas. The result is a mix of realism with an almost Cubist abstraction.

“When I started this method, it was as more of an exercise to try something new, but as I made these collages, I realized that I was creating these mysterious forms that go in and out of recognizability,” Batura says. “Sometimes you can recognize part of it or you think you know what it is, but because you don’t have all the information, you’re not totally sure what you’ve seen.”

Viewing the paintings in Edits is similar to watching clouds in the sky that morph shape as they pass.

At first, the layered protean objects may look like pieces of colliding trains, but step back a few paces and they are vaguely redolent of a fabric study or a Rorschach test. Batura’s collage method transforms disparity into cohesion on the canvas.

In the second exhibit, Moments In Between, painter Barbara Shark addresses fragments of time that are commonly overlooked due to their fleeting and mundane nature. Her representational paintings depict friends and family members in routine situations — having a relaxed conversation on a porch, driving in a car, or arranging flowers in a kitchen.

“I’m not interested in the dramatic moments, although I think the moments in between can be very dramatic if you actually look at them and are aware of what’s happening,” Shark says.

Her images bring to mind the days before digital photography, when the amateur photographer inevitably ended up with a stack of unsuccessful photos after each roll was developed — whether it was the random snapshot of the passing stranger, the unsuccessful photo where the subject looked away, or the shot where the photographer accidentally caught his or her own visage in a mirror in the background. Shark’s paintings, based on photographs she takes, are reminiscent of those photos that never ended up framed, instead resigned to a shoebox in the back of a closet. For Shark,
capturing those typically uninteresting scenes and addressing them with
careful attention is a way to bring out the beauty and compelling
details of any seemingly inconsequential or dull moment.

“When I started doing tai chi about 16 years ago, I learned that every move is equal, every move is important,” Shark says. “The way you get into a kick and the way you get out is just as important as the kick itself. As soon as I internalized that in my practice, I recognized that it was what I was interested in with my paintings as well.”

Donald Fodness and Alvin Gregorio, creators of the third exhibit, Shut Your Face Off!, fused different mediums and materials to deal with the complexity of contemporary society. Through a purposefully hectic amalgamation of found objects, neon lights, video, drawings and sculpture, the duo’s installation splices splinters of memory and identity to create an environment for self-reflection. Their explosive aesthetic feels like stepping into a strange and cluttered childhood dream, overwhelming in intensity and stimuli.

“There’s fragmentation in the very act of collaboration,” Fodness says. “For Alvin and I there’s a lot of assemblage to turn the fragmented parts we each bring into a unified whole.”

Associate Curator Petra Sertic notes that what’s important to focus on isn’t the presence of fragmentation, but rather what the artist does with it.

“It’s about how the artist collects fragments that they bring together in their work, what they make of it and how they interpret it,” Sertic says. “It’s not just representations of the different pieces, but what they create in the process of reflecting on those parts.”