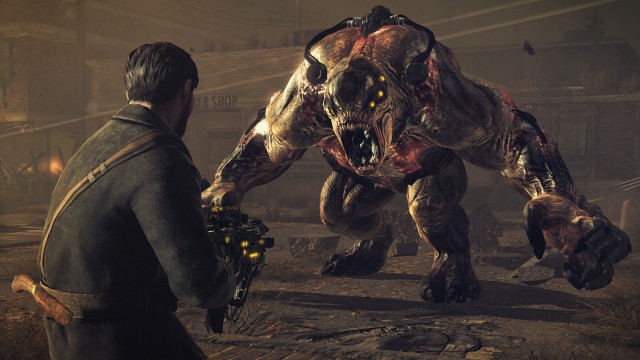 With the Resistance
series making its debut on the Playstation 3 back in 2006, it has quickly become
one of the best franchises on the system. Now in its third iteration, Resistance 3 continues the story of a
world being invaded and occupied by an alien race called the Chimera in an
alternate 1950s-era of the United States.

If you didn’t play the first two games, don’t fret,
Resistance 3 doesn’t require you to
know much of what happened, and the game does catch you up on some of the
backstory from the previous games. You play as former soldier Joseph Capelli,
famous for killing Nathan Hale, the main character from the first two games who
became infected by the Chimera. Now in hiding for the past four years in
underground bunkers in Oklahoma, scientist Fyodor Malikov shows up claiming to
have a way to stop the Chimera. He asks Capelli to go to New York with him with
hopes of finally winning this war. Leaving his wife and child while they make
their way to another safehouse, Joseph begins one hell of an adventure on his
way to New York where he’s not sure what’s going to happen.

If the story doesn’t get you intrigued, the
visuals and gameplay definitely will. The game starts off in a small Oklahoma
town that looks exactly what you would think a war-ravaged American town in the
’50s would look like. Just think of all those atomic war scares of the ‘50s. The
streets are lined with destroyed buildings and ’50s-era cars and are really dusty.
And as the scenery changes from city to city and environment to environment, it’s
just more immersive.

Controls are similar to most first person shooters
and are as fluid as any game out there today. There’s a great system to switch
weapons quickly in the the middle of a firefight or to throw different types of
grenades. The battles are intense throughout the game with numerous enemies, making
it a high tendency to get surrounded pretty quickly, only to have some other gigantic
enemy come strolling up the street. The boss battles are just crazy.

In addition to the battles, your weaponry
throughout the game is innovative and creative. From your basic machine gun,
shotgun and sniper rifle, you also have guns that fire through walls and
weapons that emit shockwaves to electrocute enemies; you can’t wait to get to
the next fight. In addition, each weapon has alternative ammo ranging from
grenades and shields to some sort of warping vortex that sucks enemies into who
knows where. And with all the enemies you’ll be running into, there’s no doubt
you’ll be scrolling through your weapons list continuously.

The excitement from the single player experience
carries over to the online multiplayer experience with the weapons, the
environment and the action. Of course there’s your run-of-the-mill games like
Deathmatch and Capture the Flag, so there’s nothing too original in that case. Regardless,
Resistance 3, which is only available on Playstation 3, is one of high points
of this gaming season.