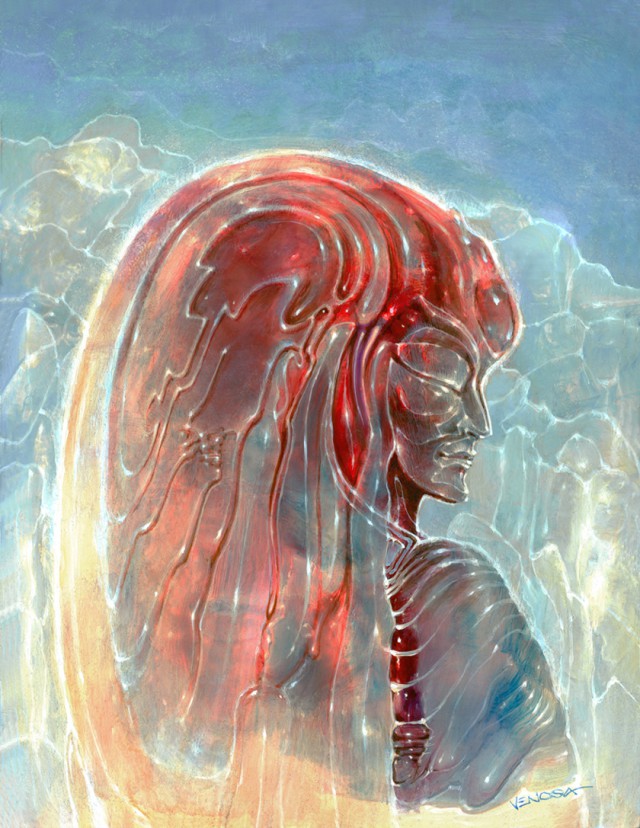 In the realm of visionary artists, Robert Venosa stands as a master of both technique and perception. During his long and varied career, the Boulder painter has created numinous, sparkling paintings that have kindled the imaginations of many people and greatly impacted the world of visionary art.

Venosa began his career as a commercial artist, designing album covers for Columbia Records as an art director in the 1960s. During this time, he discovered the work of fantastic realist painters Mati Klarwein and Ernst Fuchs. Venosa was so inspired by the two artists that he began using their work on album covers, such as Santana’s Abraxas, which he designed in collaboration with Klarwein.

“In the early days I had some very powerful visions, one of which became my first painting,” Venosa says. “Klarwein saw it and was convinced that I needed some lessons. He loved the painting but [thought] there was no technique behind it. I ended up studying with him and with Fuchs, which was wonderful, considering that they didn’t take students on.”

Venosa reveled in the tutelage of Fuchs and Klarwein, learning formal painting technique that has lent his work the seamless luminous quality he is now known for. On his website, Venosa says. “What a time that turned out to be! Not only did I get started in proper technique, but at various times I had Jimi Hendrix, Miles Davis, Jackie Kennedy and the good doctor Timothy Leary himself peering over my shoulder to see what I was up to.”

After leaving New York, Venosa eventually moved to Cadaqués, a village on the coast of Spain that is known for the number of notable artists who have lived there. It was in Cadaqués that he met Martina Hoffman, his wife and fellow visionary artist, as well as the master surrealist Salvador Dalí.

“A lot of great artists came through Cadaqués, and it was inspiring to be around so many other creative people,” Venosa says. “It was a great time in my life, and I did some of my best work there.”

When he returned to the states, Venosa moved to Sausalito, Calif. His neighbor at the time, philosopher Alan Watts, best known for bringing Zen Buddhism to the United States, introduced Venosa to a meditation that had a lasting impact on his work.

“It was during one of those evenings of meditation that this profound vision jumped into my view. It was very angelic,” Venosa says. “I started chasing that vision, trying to paint it, because it was so overwhelming but so beautiful — I knew it was my path. I’ve been chasing that vision ever since.”

For Venosa, painting is meditation, since it allows painters to lose themselves in space and time. Venosa approaches painting in a very expansive way, allowing the creativity to flow through him in order to “see what narrative and energies are trying to come through in form or color.”

Venosa teaches this technique with his wife Hoffman at workshops across the world, passing on the centuries-old techniques he learned from Klarwein and Fuchs, blended with his unfettered creative approach.

“The art world is slowly shifting over to digital. I enjoy a lot of what’s going on in that world, but you can’t replace painting by hand,” Venosa says. “There’s a human element and human energetic power there that goes directly onto the canvas — that’s what we try to pass along.”

Both Hoffman and Venosa focus on bringing truth, beauty and goodness into their work by concentrating on light, positivity and love. For them, the role of the artist is similar to that of a shaman, someone who explores consciousness and shares what they have found.

“A shaman is someone who opens up your imagination, your mind and your consciousness, and an artist hopes to do that through their creativity,” Venosa says. “Creativity is our major connection to the universe. When you’re a creative being you have a direct conduit to all possibilities of the universe, the energies of the universe. As long as you create, you become sort of like a co-creator with the great creator. The minute that we become part of a creative act and open ourselves to the possibilities of other existences, others might be inspired by us. They’re either going to resonate with it and recognize it as something that’s possible, or they’ll take it as foolish illusions of the artist.”

If Venosa has any advice for other artists, it’s just to sit down and start painting.

“Your guide will help you along the way. When I paint, I’m not concerned with what’s going to come out,” Venosa says. “The most that I could hope for my art is that it inspires people, and if it does, it’s going way beyond my expectations. It’s a tremendous reward.”