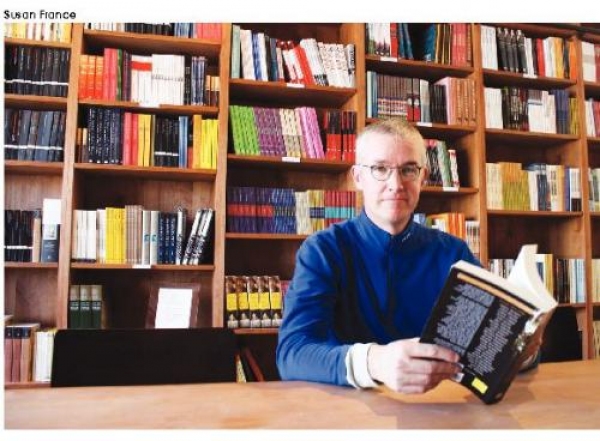 The couple opening the nation’s third poetry-only bookstore on the Hill knew of the uphill battle they would face trying to make their living off an art form many consider stuffy and inaccessible. In fact, according to Brian Buckley, who co-owns Innisfree Poetry Bookstore and Café with wife Kate Hunter, the couple was two hours late to the lease signing for the space on 1203 13th St.

“I sat in a chair thinking about it,” Buckley says. “It was exciting and intimidating at the same time.”

Innisfree Bookstore and Café is only the third bookstore in the country to devote itself exclusively to poetry, according to trade magazine Publishers Weekly. The south-facing store, located across the street from The Sink and Buchanan’s Coffee Pub, is a cozy 460 square feet lined with alder bookshelves filled with poetry volumes. A counter with three stools offers seats in front of the window, and a thin wooden table lined with dark wooden chairs runs through the center of the store from the door to the coffee bar, where patrons can order locally roasted Conscious Coffee and buy books.

The couple wants the store to be a friendly place where anyone with an interest in the medium, be it casual or academic, can sit and enjoy poetry and good coffee.

“I think that because we started the store, we’re supposed to be poetry gurus or something, but we’re not,” Hunter says. “We’re here to encourage people to find something they like in poetry, something that touches them.”

Poetry brought the couple together. After returning from a Peace Corps stint in Thailand, Buckley enrolled in the University of Massachusetts in Boston and began working on his Master’s degree in English Literature, translating Thai poetry for his thesis. He met Hunter in a poetry seminar there, and he devoted each of the 12 poems he had to write, each in a different style, to her. They married and began their careers, but they always idly talked about opening a poetry bookstore. They moved to Boulder after Buckley’s father passed away in 2009, and they realized the time was ripe to stop dreaming and start acting.

“Seeing my parents pass away, and knowing the finite amount of time in life, I almost felt a responsibility to them [to follow my dreams],” Buckley says.

He and his wife had moved here for the mountains, the school system and old friends, but they soon realized they had discovered a fertile nest of poetry readers, writers and educators — the perfect location for opening their poetry store.

“It was like, ‘Oh my heavens, did we serendipitously land in a place where we could make this dream happen?’” Buckley says. “It was like a perfect finger pointing at yourself. … Are you going to regret not doing this in the future?”

They scoured Craigslist and found the location on 13th Street and Pennsylvania Avenue. The south-facing storefront, the small space and the high-traffic corner located right next to the university seemed perfect. They leapt at the opportunity.

“It seemed like we could do it even though we just had [our second] child,” Hunter says. “It wasn’t easy, but we knew that it was going to depend on location, and we knew that it had to happen.”

The store opened on Dec. 10, but the grand opening party won’t be until Saturday, Jan. 15. The response to the store has been overwhelmingly positive so far, Buckley says. On a recent afternoon there was a small crowd in the store, and Buckley says they have sold more books than he and his wife had expected. He attributes this partly to good selection, but perhaps even more to the buy-local, help-your-neighbor attitude so prevalent in Boulder. The town already seems to be rooting for the store, he says.

Eventually, Buckley and Hunter hope the store will be enough to sustain their family of four and grow to the point where they can eventually move into bigger digs. But they also have a grander vision for the store. They want to provide a space to inspire people to discover poetry they love and realize that poems aren’t just for academics and elitists. One of the last conversations Buckley had with his father was about Seamus Heaney’s “A Kite for Michael and Christopher.” His father never attended college but still found beauty in poetry.

“His life would have been different if someone had tried to make him feel inferior to poets,” Buckley says.

Hunter says, “Poetry is not this high art form exclusively. There are poets like that, just like there are painters like that. Any kind of field you go into, there are people in their field who only want to deal with experts in their field. We’re not like that in terms of what we’re putting together here. We want to help revive poetry.”