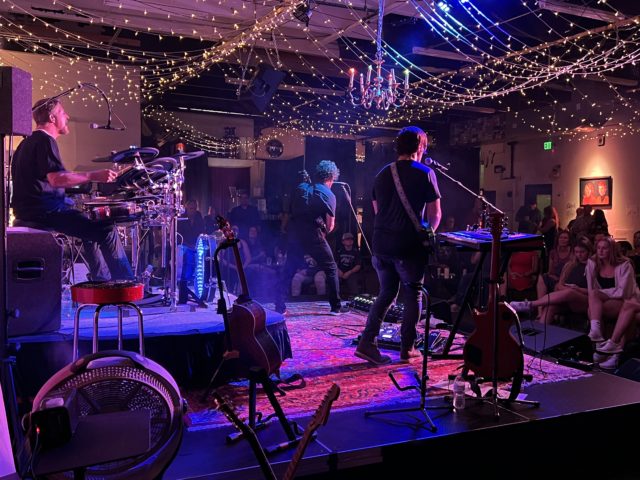 The next time you bemoan a bad driver in Boulder with a Texas license plate, or see another “Go Back to Texas and Tell Your Friends Colorado Sucks” bumper sticker, remember a lot of good things we enjoy around here have come from the Lone Star State: Alamo Drafthouse, Torchy’s Tacos and Dave Kennedy, founder of the local nonprofit Roots Music Project.

Kennedy sold the Texas company that became Match.com, which he co-founded in 1996, and has been a partner at Alamo Drafthouse since it first branched out of Austin in 2004. With his new Front Range venture designed to give local musicians and venues a boost, the 56 year old is intent on bringing small concerts back to Boulder.

The Fox and Boulder theaters keep a veritable stranglehold on live music here, and local acts seek something in between the café-and-small-bar scene and big-time venues. That’s where the Roots Music Project comes in, offering a performance space for local gigging musicians and providing a suite of services to help Boulder establishments develop thriving live-music programs.

As a student at the University of Texas, Kennedy was obsessed with seeing blues music at the legendary Antone’s, where, as a kid, his parents snuck him into a  Muddy Waters concert. His love of music stuck with him but didn’t become a big part of his professional life until he moved to Colorado in 2004.

“I graduated, had a corporate career, started a business, had kids, and I had played a little bit of guitar in high school but pretty much put the guitar under the bed until I was, like, 40,” Kennedy says. “My kids started doing a rock camp at Dog House Music [in Lafayette] and I saw they had an adult band camp. I wanted to play with other people, so I did it and met a bunch of people and had a horrible band, but we had fun playing. We rented a practice space and when we’d finally practiced and were good enough to play gigs somewhere, I started trying to just network and say, ‘How can we get a gig?’”

But the group had a hard time finding places to play.

“I said, ‘OK, we’re gonna start a nonprofit and we’re gonna organize gigs and then we’re just gonna organize shows, pay the bands, and create opportunities,” Kennedy says. “We are booking some national acts, too, but we always pair ‘em with a local support act. That’s part of the ethos.”

That’s why Kennedy founded the Roots Music Project, which secured its current space in 2019 — inside one of the warehouses near Pearl Street and 47th Street — and recently took its mission “to foster the local scene for musicians, fans and venues” into overdrive with concerts, lessons, rehearsal availability and more.

“The three pillars of it are fans, artists and venues,” Kennedy explains. He says he realizes the importance of small music venues like Denver’s Hi-Dive, where, on the way to headlining big-time clubs and theaters, bands can develop in a place where people only walk in the door to see live music. The tiny Velvet Elk Lounge is helping bridge that gap in Boulder, as is Roots.

Along with hosting concerts, lessons and rehearsals, Roots offers free songwriting circles and even a service where a backing band learns musicians’ original compositions and helps bring them alive. There is also talk of launching DIY management-and-publicity workshops.

Muddy Waters guitarist Bob Margolin, once a staple at the much-missed Outlook Hotel in Boulder, will play Roots on Friday, Sept. 30 and host an invitation-only Masterclass Blues Workshop the night before.

“We’re on a smaller scale than them. We’re trying to get our focus and our story really clear,” he says. “We have a great events space, but the mission is really way broader than that. We have aspirations to do more things.”

Roots also provides local musicians the opportunity to work and volunteer at the space, from running sound to doing social media. Everybody involved seems to just care.

During a sold-out show at Roots on a steamy Friday night this July, the venue opened up its big garage door for air and to let the music wash over the community. It felt like one of those unforgettable nights seeing music in high school or college when the venue could be anywhere — your parents’ basement, a clothing store, a skate park — and being part of a local scene was all that mattered.

Gasoline Lollipops frontman Clay Rose, who Kennedy says “has deep roots in Boulder” (no pun intended) hosted his first songwriting showcase at Roots on Sept. 21, with more to come on Thursdays every month moving forward.

“It has been my hope for the past decade that someone would open a small, independent listening room in Boulder. Beginning in the mid-’90s they were all systematically removed due to corporate greed in one form or another,” Rose says. “When I heard that Dave had opened up Roots Music Project, I jumped at the opportunity to pitch him my idea for a monthly songwriter showcase. He seemed equally eager to host the event, as our visions of nurturing Boulder’s dwindling music scene were apparently parallel.”

As the Roots Music Project continues to grow its offerings for local artists, Rose says the ultimate value of the nonprofit lies in its potential to restore a once-thriving local music scene.

“Boulder was once known around the country as a town where new artists could come to blossom,” he says. “I’m grateful to Dave. His understanding of Boulder’s history, and our current gold mine of talent, may be just what this town needs to regenerate its amputated limbs.”