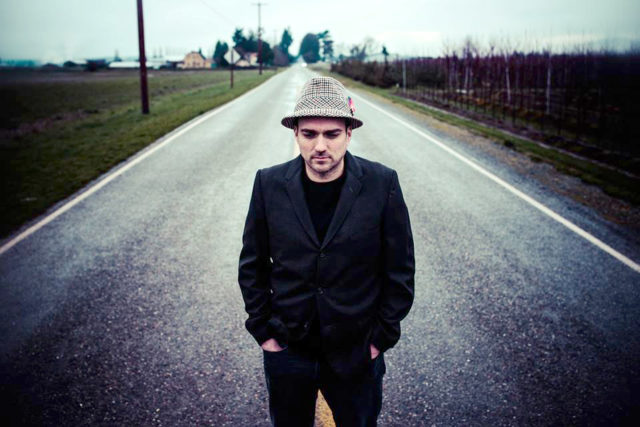 Theoretically, when you drop a stone into water, the ripples continue on forever, ad infinitum.

So while Jeremy Enigk doesn’t regret coming out as a born-again Christian back in 1994, right as his band Sunny Day Real Estate was breaking big, he can still see the ripples expanding out from the point of impact.

“Certainly back then that was an incredible leap of faith,” Enigk says over the phone after sound check for a show in Austin, where the emo-punk pioneer is on tour in support of the re-release of his 1996 debut solo album, the decidedly un-punk Return of the Frog Queen.

“The thing with faith-jumping is that when you are true to yourself and you do jump, I’m pretty sure you’re gonna be caught every single time. And that was what I was doing [by coming out as a Christian]. But I’m still dealing with the repercussions of that decision even now.”

Enigk was 20 years old when he penned an open letter to a fan who’d taken to an internet forum to express concern about rumors that Enigk’s faith was creating an irrevocable rift in Sunny Day Real Estate.

Truth is, it was.

“I have different intentions now,” Enigk wrote in response. “I want to take the band on a different path then (sic) they. It is no longer the financial freedom that once controlled me, but it is to expose people to truth for their sake and especially Jesus’ sake. …

“Call me crazy, for I’d rather be crazy and see what I’ve seen, then (sic) to ever go back to where I was.”

It was dramatic — Enigk is the first to admit it — but, Enigk says, “it was a decision at the time that was completely supported by the universe.”

“I’m not the same person I was back then,” he tells me. “At that time I was going through some heavy, heavy stuff and I turned to a very specific book for inspiration and I found it. And now I still believe in similar things but it’s much more open and not so rigid. But yes, my belief in God and the universe is a huge part of my daily life but I don’t try to be so specific the way I was in my crazy letter.”

Sure, the letter was crazy, but without it we wouldn’t have Return of the Frog Queen, a collection of beautifully peculiar songs that inarguably, if unconsciously, influenced a generation of musicians that came after Enigk, from Elliott Smith to Joanna Newsom to Bon Iver. Frog Queen, with its 21-piece backing orchestra, was just another leap of faith for Enigk.

Sunny Day Real Estate emerged at a time when, as author Andy Greenwald put it in his emo-punk primer Nothing Feels Good, “sincerity became currency” in the music industry. On May 10, 1994, just one month after Kurt Cobain’s death, Nirvana’s record label, Sub Pop, released Sunny Day’s first album, Diary. It became the label’s biggest selling album since Nirvana’s Bleach in ’89. (As of 2008, it was still the label’s seventh best-selling record.)

Sunny Day had, perhaps by sheer virtue of being young, tapped into an unmet need in punk music: unrepentant emotional indulgence.

Where Nirvana was apathetic, Sunny Day was earnest. They developed a progressive form of punk that wore its emotions proudly on its sleeve without ever tipping over into syrupy insipidities.

At 19 years old, Enigk became the godfather of emo, and Diary became what many consider the greatest emo album ever made — no eyeliner necessary.

So when the band broke up in 1995, Enigk could have cashed in on the sound he helped create. But he was shattered about the dissolution of his band and wondering if he even wanted to keep making music professionally. Creatively, he knew he had to make a sharp departure from Sunny Day’s sound if he were to go it alone.

With Sub Pop in full support mode, Enigk bent toward the whimsical, looking to The Beatles’ Magical Mystery Tour, Tom Waits, and Harry Neilson’s work on the Popeye soundtrack for inspiration for 1996’s Return of the Frog Queen.

From the first wistful chords of album-opener “Abegail Anne,” it’s clear Enigk was on a journey of exploration, both musically and personally. It’s full of charming contemplation, shrouded spirituality and candid ambition. Even its worst moments — the middle tracks, “Lizard” and “Carnival,” are a little silly when compared to their peers — are easily forgiven because the whole thing is just so damn sincere. With a symphony to back up Enigk’s emotionally charged wails, Frog Queen forged a path that indie rock stars follow to this day.

Though it never garnered the same attention as Sunny Day’s work (their re-unification and collective masterpiece, How it Feels to be Something On, was still, unbeknownst to all involved, on the horizon), Frog Queen was much beloved in its own quiet way. Last year, for the first Upstream Music Fest in Seattle, radio DJ Marco Collins asked Enigk if he’d play Frog Queen in full, with enough financial support to bring in a full band and a string quartet. And Tony Kiewel, president of Sub Pop, has told Enigk the album is one of his favorites. But the album has been out of print since its original pressing in 1996, which is all to say that this year, 22 years after its initial release, seemed as good as any to polish it up and re-issue it.

While Sub Pop re-issued the album, Enigk isn’t under contract with the label… or any label for that matter. He’s a one-man operation, with no manager or publicist. He responded directly to me via email about setting up an interview, and then called from his cell phone later that evening, at 6:30 on the dot.

Funded by PledgeMusic and supported by a living room tour, Enigk’s most recent album, Ghosts, was a labor of intensive love that took two years to complete.

“I knew it was going to be more than I’m used to and I knew it was going to challenge me in a major way and motivate me to get off my ass and be the musician that I’m supposed to be,” Enigk says of producing Ghosts. “Because as soon as I press start on [PledgeMusic] and send out that video and people start supporting the project, I have to do it. So I did it and it ended up being a lot more difficult than I could possible imagine because I did do a lot of it alone.”

No hyperbole there; Enigk himself boxed up vinyl records and sent them to fans who had pre-ordered Ghosts.

Enigk seems happy now, “drinking beers and eating bad food… trying to eat good food,” out on the road with his band of eight, including a couple of strings and an extra keyboardist — even if he can still see the ripples of his youthful choice still washing over him 24 years later. And really, those waves only carry on theoretically. In practice, the energy expands over an ever-wider area until it becomes so weak it’s undetectable.