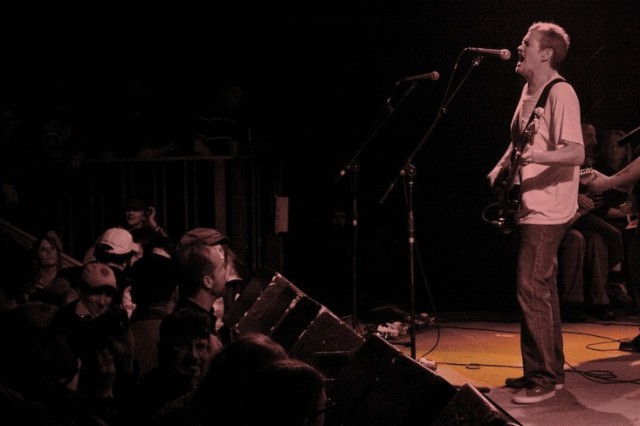 Moistboyz and Meat Puppets hosted a grungy, moshy hoe-down at the Fox on Tuesday, April 2.

Moistboyz, a hard rock, heavy metal punk group lead by Mickey “Moist” (also known as Mickey Melchiondo of the band Ween), opened up the night with an aggressive show that heated up the venue for the main act: Meat Puppets.

The group mixes psychedelic jams over fast-paced bass lines that stay true to the “up-beat.” In the early ‘90s they pioneered this sound —often referred to as “cowpunk” — country style rhythms at a punk-rock speed.

Despite several minor hits in the ’90s, the Arizona-based band is still best known as guest artists from Nirvana’s legendary MTV Unplugged performance in 1993.

After opening their show at The Fox with a cowboy-jam that made it impossible to resist the urge to foot stomp and knee-slap on tempo, the Puppets threw down the hit “Plateau,” which was made famous by Kurt Cobain. That got things rolling for a night full of frenzied, country boogie fueled by proper, hardcore rock, moving the crowd from toe-tapping to full-on, friendly thrashing.