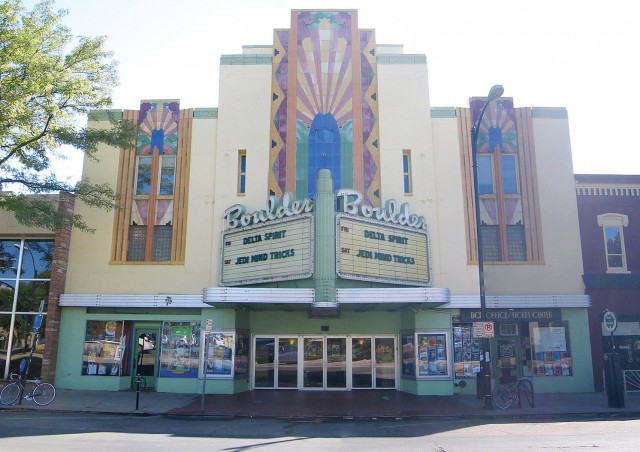 Attending a show at the historic Boulder Theater can
be like stepping into an art deco time capsule that’s blaring modern rock. Or
jazz. Or showing a movie. The former opera house has branched out quite a bit
since it was first built.

One of Boulder’s favorite architectural gems and most
beloved concert venues celebrated its 75th anniversary this week, but the 75
number might be a bit misleading, as the building itself existed from 1906 to
1936 as the Curran Opera House. The year 1936 brought major renovations to the opera
house’s interior, changing the entire layout of the opera house and adding the
colorful murals and paintings for which the theater is famous, according to
Cheryl Ligouri, CEO of Z2, the company that manages both the Boulder Theater
and the Fox Theatre. A naming contest set the name as “The Boulder,” hence the
75th anniversary celebration this year.

“I can’t imagine what Boulder would be like without the
Boulder Theater,” Ligouri says. “And we’re really happy that we’ve been able to
stay true to our roots, which is to be a big part of Boulder’s entertainment
world.”

From the time of the renovation to about the late ’70s, the
Boulder Theater was exclusively a movie house, but that changed as multiplex
theaters moved to town, forcing Mann Theatres, the then-owner, to shut the
theater’s doors in 1979. In 1981, Mountain Productions bought the theater and
renovated the interior to become a multi-purpose concert venue, capable of hosting
musical acts as well as screening films. However, Mountain Productions closed
the theater a few years later. Several ownership changes later, Doug Greene is
now the owner.

“You just wanted to go there because they were the acts you
couldn’t see anywhere else,” Rucker says. “You didn’t have to go to Denver; you
could see them in downtown Boulder.”

In 1980, with the theater’s future up in the air, the city
designated the marquee sign a historic landmark, rendering it immune to future
development. In other words, no one could tear down the sign, all but cementing
the theater as a fixture on 14th Street. Since then, the venue has mostly
hosted concerts as well as a mix of other entertainment events.

“I think [the landmark designation] is one of the things
that really saved the theater early on,” Rucker says. “I think that’s what kept
it from being Boulderized early on.”

The theater is closely entwined with Boulder’s history and
has hosted some of the most famous names in music, including B.B. King, Lucinda
Williams, Bonnie Raitt, Blues Traveler and Johnny Cash. The theater continues
to attract big names. The theater kicked off its 75th year on Friday with the
first of two nights of performance by Wilco frontman Jeff Tweedy, and King will
return later this month. Amos Lee, the Decemberists, Ice Cube and Randy Newman
all are booked for the upcoming months.

The theater is now the home of some of Boulder’s most
cherished entertainment traditions, from the eTown radio program to the annual
Warren Miller film screenings to the Boulder International Film Festival and
more. Since merging with the Fox Theatre last year, the colorful theater seems
to only have gotten stronger. Projects for the upcoming year include renovating
the balcony seats, which haven’t been removed since the theater re-opened in
1936. The theater plans to ask supporters to sponsor a chair. Official prices
have not yet been set and will be announced next week, but Ligouri says the
price will vary from around $275 to $600, depending on whether the donor is an
individual, a family or a business.