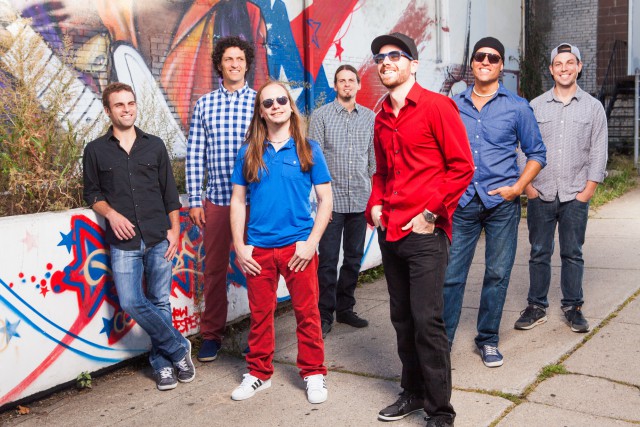 Dodging and weaving their way around countless hyphenated genre tags over the course of better than a decade, The Motet greet the new year with just one: funk band.

Drummer and Motet majordomo Dave Watts unleashes the Boulder-based band’s seventh and most rigorously cogent CD this coming weekend, titled simply The Motet. Eponymous CDs are usually a not-so-subtle statement of identity, and while the band pushes a lethal dance-floor bounce front and center, honed by several years of playing tribute shows covering landmark artists like Earth, Wind & Fire and Parliament-Funkadelic, the CD also resonates with the band’s lengthy tenure on the groove and jazz-jam circuit. Longer cuts (only one shorter than five minutes and several over six), crafty instrumental interludes, some healthy soloing and a sparkling garnish of house electronics belie a band that hasn’t forgotten where they’ve been. There’s a reasonable argument to be had about what makes a “commercial” release in this day and age, but the fact is, this is not a pop record.

“No, you’re right,” Watts says. “And I think we’re actually going to release a ‘radio edit’ version of it, with some of the tunes cut down. I realize that you can do that: cut some of the songs down and still have them make sense as songs. But you know, we’re a solo band; every one wants to play solos. The first track of the record has two solos on it. Most [classic funk] tunes don’t have any.”

But this is hardly a jam record, either. Torched by the grimacing burn of vocalist Jans Ingber’s lead vocals, the stuff gets deep right off the bat. “Like We Own It,” the lead-off track and one of the CD’s bedrock servings, bounces across a mid-tempo beat punctuated by alternately sly and punctuating horn charts before yielding into a creamy Joey Porter keys solo. Likewise, the Tower of Power-ish raver “Closed Mouth Don’t Get Fed” plays Ingber’s effortless octave scaling off dizzying brass lines, tightly arranged so that neither steps on the other. The instrumental “Rynodub,” the CD’s most obvious nod to the band’s past forays into horn-stitched house music, grunts and prowls like a furtive sci-fi feline, opening up into a synth melody line that vaguely recalls The Specials’ iconic “Ghost Town.” And what may be the album’s jewel, the seductive “Extraordinary High,” moves between a breezy Impala backseat make-out groove into a punchy, almost-Latin middle section and a string-sweetened ride out, eerily conjuring a mid-’70s Philly R&B vibe.

So the lesson is unmistakable. If you’re going to take a four-year break from recording a CD, don’t waste it on a slam-out-a-live-gig exercise, especially if (as is their habit), you make plenty of the live stuff available a few mouse-clicks away anyway. This is a studio record worthy of the name; original tunes, utterly flawless production and not a throwaway in the bunch. Ambitious, airtight and built to travel.

And as good as Ingber’s vocals are here — if you’ve never heard this cat, you’re in for a spine-tingling treat — the listener is never really persuaded to regard this as a vocalist’s showcase. The Motet has always been about the greater sum of its parts, and that holds true even for a vocal-heavy CD.

“We actually had the vocals [louder] in the mix for a minute there,” Watts says, “and we were all talking about it. And we were like, ‘We’ve been an instrumental band for a long time.’ We’re not trying to make this a vocal record; we want to feature the band. Especially here, I’ve got the bass featured on a lot of the record. We wanted that to be out there too, we didn’t want to diminish that at all by having the mix lean too far in one direction or another.

“So that was something that came across to us and was thought out to a certain degree. It’s a balance; when you’re going into the studio, you’re trying to balance everything. … The album is really a true expression of us becoming a band.”

And as for the brass — beat-stomping exclamation points, carefully woven filigrees, gusty raves — Watts just turned the charts over to the horn section.

“In a lot of ways, it’s fairly new to them, because they’re more steeped in jazz than anything, but the last three or four Halloween [tribute shows], doing the music of Parliament-Funkadelic and Earth, Wind & Fire, really kind of expanded their minds when it comes to horn arrangements. They really stepped up.”

For his part, Watts knows that The Motet is fairly tightly associated with the groove scene. His audience is pretty well established and has traveled far with the band. Having a reputation as a serious guy with an outstanding band and a lengthy resume, though, also allows Watts the freedom to say out loud what a lot of the scene’s rank and file may have already quietly admitted to themselves.

“Honestly, one of the things that I miss the most about the scene that we’re in is that there aren’t that many great songs being written,” he says. “There are some great musical moments, but not a lot of great songs. So we’re trying to apply a songwriting ethic to what we already do.”