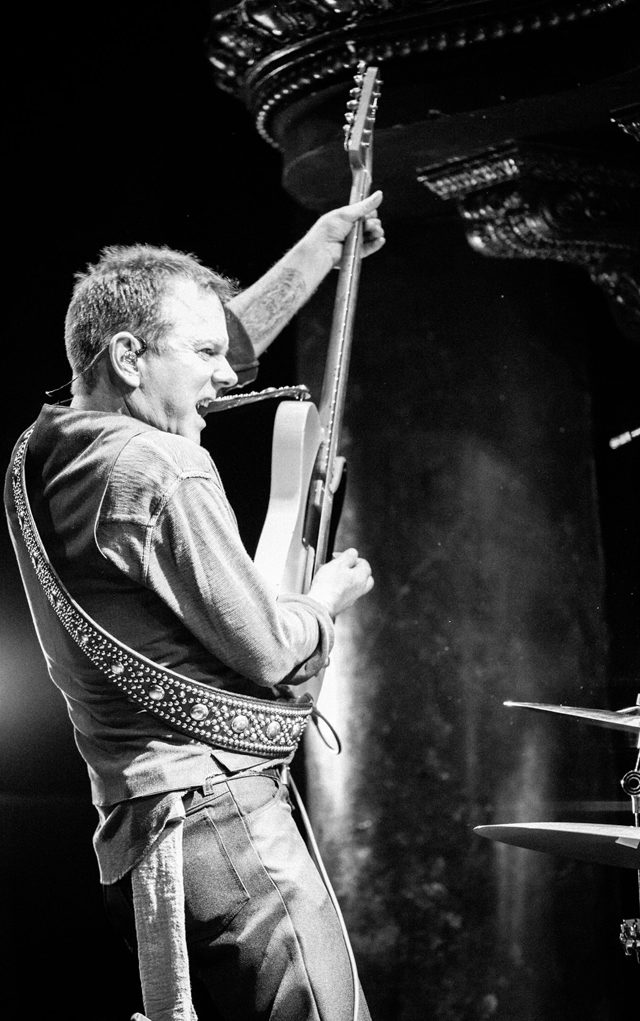 When actor Kiefer Sutherland first thought of demoing songs he had written, he wasn’t planning to be the person releasing them.

“I had written them awhile back, but I had 15 or 20 songs that I wanted to kind of do demos of and maybe send them off to BMI or maybe Sony Music and see if one of their artists would ever like to record them,” Sutherland explains in a recent phone interview.

Instead, he recorded a couple of the songs with good friend Jude Cole, who had other ideas once he heard Sutherland sing them.

“Jude said, ‘I don’t think you should give these away so fast. I really like them and they’re really personal to you. I can tell that. Maybe we could do a couple more and maybe you’d like to make an album,’” Sutherland recalls. “And I remember laughing at him: ‘That’s ridiculous. That will never happen because I’m clearly aware that actors doing music has never been received very well,’ and I didn’t want to put myself in that position.”

Now Sutherland is on his second U.S. tour supporting the album Cold suggested they make, Down in the Hole.

It turns out, Cole and Sutherland decided over a couple of drinks to record a couple more of the songs, and Sutherland started to like the way the songs were sounding. Soon Cole was producing and bringing his songwriting input to the 11 songs that make up the album.

“He (Cole) basically took the songs and arranged them, like a producer would,” Sutherland says. “But where he was so amazingly helpful is he would actually — and he’s such a beautiful writer — he would restructure a chord progression that would allow you to do a really nice, simple bridge here. So he really gave the songs structure.”

Sutherland describes the sound of Down in the Hole as “Americana with a country twist.” “Not Enough Whiskey” and “Shirley Jean” are spare, largely acoustic ballads in the traditional country vein. Sutherland’s weathered baritone voice nicely fits the tone of the songs.

“[The title song] ‘Down in the Hole’ is… it’s a rock track to me, or a country-rock track to me,” Sutherland says. “‘Can’t Stay Away,’ I would say the same thing. A couple of love songs are much more Jackson Browne sounding than they are traditional [country] — and I’m certainly not comparing myself to Jackson Browne — but just that tone, almost like the California rock sound as opposed to straight-up country.”

As the son of acting great Donald Sutherland, acting was a natural career choice for Sutherland, who at age 50, has built an enviable career in television, movies and theater.

But he’s had a long-running interest and involvement in music, first writing songs while in a band as a teenager.

“I can still remember the first song I ever wrote,” he says. “I play it every once in awhile to make my friends laugh. I think it was called ‘Mother, Won’t You Leave Me Alone.’”

After becoming friends with Cole — an accomplished songwriter and singer who released five solo albums between 1987 and 2000 and has gone on to enjoy a productive career as a songwriter and producer — the pair founded a small record label, Ironworks, in 2002.

By that time, though, acting had already taken a leading role in Sutherland’s pursuits. With a resume that included roles in such high-profile films as Stand by Me, The Lost Boys, Young Guns I and II and A Few Good Men, he was cast to portray Jack Bauer in a Fox television series set to debut in 2001 called 24.

The series became an instant hit with Sutherland playing a counter terrorist unit agent. Each of the first eight seasons featured 24 episodes, each representing an hour in a single day of Bauer’s life as he raced against the clock to stop whatever crisis loomed — presidential assassination attempts, bombings, corruption, etc.

Although 24 came to an end after a 12-episode ninth season, Sutherland is now one of a number of producers of a spin-off series, 24: Legacy, which is now airing on the Fox network.

He says 24 and the Jack Bauer role was the “gift of a lifetime,” and he sensed early on that it might be big for his future.

“You have to understand that for maybe seven years prior to 24, my career was not going very well as an actor,” Sutherland says. “In fact, I had to stop for awhile because if I had made a couple more not-great films, or bad films, it would be over.

“So when 24 took off, I hadn’t experienced that [sort of acclaim] since maybe A Few Good Men or Flatliners. That’s quite a ways back,” he says. “I think when I was younger, I would take the successes of certain films for granted because it just always seemed to happen. Having gone 10 years where it wasn’t happening and to have it happen again … I remember my first reaction was don’t mess this up because it’s a real opportunity. So I guess on some level I felt it had the potential.”

When 24 completed its run in 2014, it gave Sutherland an opening for other activities, including making Down in a Hole. Since then, he’s returned to television with his new ABC series, Designated Survivor, which debuted last fall.

“Every time there’s a State of the Union, it’s actually written in the Constitution, each party has to pick a cabinet member that is sequestered and protected by the FBI in case of a disaster,” Sutherland says, explaining the premise of the show. “I think they were thinking of [the danger of] fire back when the Capitol building was mainly [built of] wood. And so that there would be somebody left in the line of succession to the presidency. …

“So [my character] and his wife spend it watching in a board room somewhere, and a terrorist attack happens and the Capitol building is destroyed and he becomes president overnight,” he says. “And the show is really an examination of what that does to his family. That is one aspect of the show. The other aspect is the incredible, the reaching back for power from other people within the government and the military, and then the investigation into who did this and what is ultimately going to be the appropriate response. It is written very well.”

In between episodes of the show, singer/guitarist Sutherland schedules tour stops, like his visit to the Fox Theatre on May 10. Along with his four-piece band, he says he plans to play the entire Down in a Hole album, plus a couple of songs planned for a second album and possibly a third tune that was left off of the debut album.

Sutherland has found playing live to be one of the most fun and rewarding parts of venturing into music.

“To be able to go and play my own songs and be able to explain where I was at when I wrote this song, and maybe there’s a connection somewhere between me and you, [is special],” he says. “You realize that my life, as lucky as I’ve been, the human aspect of my life really is not that much different than yours. We all go through the same things. The same things hurt us and the same things make us happy. So I really liked playing my songs in that context. … That’s really been the thing I’ve been most excited about doing.”