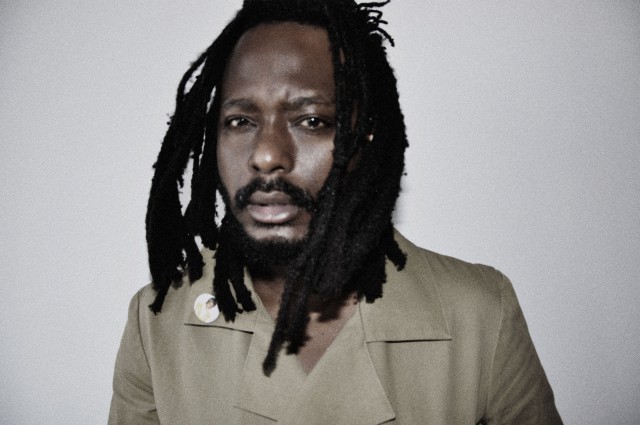 What bothers Canadian rapper-singer k-os the most is artist fraud. The artist who projects one image in the music but lives an entirely different one.

“If there was a position in the CIA for artist fraud I’d be that guy,” says k-os, 38, whose real name is Kevin Brereton. “I’d be out there every day trying to show and expose the fraudulent artists. Why?

Because it’s my biggest fear — to be fraudulent.”

It’s a prevalent issue in the world of hip-hop today, one that strikes a chord with k-os. Growing up listening to the music, he has had his fair share of disappointments and doesn’t want to be one of those artists whose authenticity might be questioned.

“I’ve been disappointed by art as much in my lifetime as I love it,” he says. “I’ve met artists that I’ve been fans of and been disappointed. I’ve loved albums by artists, and they come out with something I don’t like, and I took it really hard. The artist you love does something you wouldn’t think they’d do because of everything they did before that … either they were fake before or they’re fake now.”

When listening to k-os’ latest project, The Anchorman Mixtape, the words “fake” or “fraudulent” aren’t even in the same stratosphere. As with his full-length albums, Exit, Joyful Rebellion, Atlantis: Hymns for the Disco and Yes!, The Anchorman Mixtape is honest, straight-forward, in-depth and genuine. While most hip-hop mixtapes hitting the streets these days feature an artist rapping over instrumentals of hit songs and reciting throwaway lyrics that were left over from a previous album, k-os brings originally produced instrumentation, ranging from head-nodding beats to
guitar-driven rhythms fitting for any full-length album. And of course
his signature thought-provoking and clever songwriting is littered
throughout the project.

Topics
range from his love-hate relationship with hip-hop to past
relationships and heartbreaks, spruced with a spiritual sprinkle.

K-os recorded the mixtape while on tour with hip-hop wunderkind Drake, inspired by multiple viewings of the Will Ferrell film Anchorman. Clips from the film precede the songs featured on the mixtape.

“Anchorman
was a movie that came to me on the tour bus by my monitor man Matt
Sullivan — we call him Sully. He basically brought this movie to me, and
we watched it and watched it again and we started quoting scenes,” k-os
says, adding that a lot of people in his circle hadn’t seen the film or
even heard of Will Ferrell. “Maybe it wouldn’t be a movie that people
watch in the ’hood, but I thought it was cool, that maybe if I put this
hip-hop soundtrack to it, it would show how congruent and how the same
everybody’s culture is.”

The creation of the project was sort of liberating for k-os. He’d just released Yes! in
the spring of 2009, had no commitments music-wise, had the freedom to
experiment musically and had hours of free time while touring the
nation. The absence of deadline pressure is something k-os enjoyed.

“I
told my people, I don’t want to be in a studio for two months or a
month working,” he explains. “Hooking up stuff, looking at a soundboard
… I’m done with that process. It’s boring me now. Six months ago I
said I wasn’t going to make any more albums, and everyone freaked, like,
‘Oh, he said this before,’ but little did they know that that wasn’t
some off-the-cuff statement.

“I’ve
already been preparing for that and the mixtape is the perfect example,
because all of those songs could have been released on a monthly basis
over the next year, but I just decided, let’s just put them out. I’m
just going to drop tracks on Twitter, my blog (tour-tv.com) and on
Facebook and give it away to people who want to hear it.”

One
of the songs k-os is hoping to create and get out to the public is one
with Shania Twain. Yes, the Canadian country singer. The rapper has his
people trying to find her, and he scoffs at anyone questioning how a
hip-hop artist and
a country artist could collaborate on a song. The questions even came
up when he was collaborating and touring with Drake. Drake, a hip-pop
artist signed to Lil Wayne’s Young Money imprint, and k-os, an artist
often labeled as alt-hip-hop because of his musical range, hanging out
together? Although he finds the question odd, he understands.

“Yeah,
you dress different, yeah, you’re on a different label, yeah, one guy
raps about cars the other guy raps about stars in the sky,” he says.
“Yeah, it’s different with me, but really, we’re more the same than
somebody who drives a tractor or is a president of a country. Artists
are kind of a species of their own, and if you put it like that, it’s
never really weird when any two artists get together. Whether it’s Bing
Crosby and David Bowie or whether it’s Paul McCartney and Michael
Jackson. I think hip-hop kind of separates that because people don’t
like to connect the lucrative money side of hip-hop to the
anti-establishment roots side of hip-hop. They like to keep it separate
because it’s a different artistic texture. [When combined] this causes a
creation of confusion in the fan and the artist. I find that the more records I make, I don’t have those confusions anymore because who I am is defined.”

In
the meantime, k-os is preparing for his first U.S. tour as a headliner.
Although he’s toured the States on numerous occasions with The Roots,
De La Soul and, of course, Drake, he’s never headlined a tour of his
own. He admits he’s taken his time to get a major U.S. tour off the
ground.

“America is
the home of hip-hop, and I guess in some ways I’ve always been nervous
and scared of America. Not in a negative sense, but it’s just such a big
sandwich to bite into,” he says. “You want to come from the right
angle. I’m creating my own reality in America slowly, and I think the
mixtape was part of the process. Sometimes people are skeptical. You got
to go out there, and you wonder who is going to show up at the shows.

“But
this is the music of my youth; this is hip-hop. And even though it
isn’t a Canadian-created music, it’s still in my soul, and it’s guided
me in my youth. So it really just came down to just loving hip-hop and
having faith in that dynamic and letting that lead the way.”

There’s nothing fake or fraudulent about that.