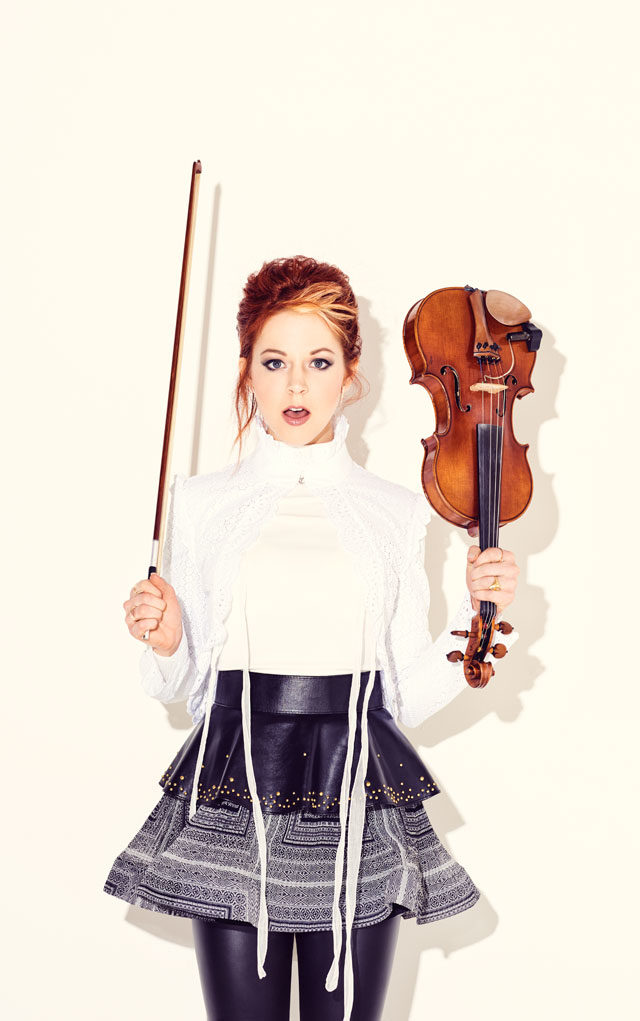 Lindsey Stirling has spent her career pushing boundaries. While most violinists are known for sitting in a chair playing classical music, Stirling takes a different approach.

“I kind of use the violin as a metaphor,” she says. “Why can’t it be electronic? Why can’t I dance while I play? Just because it’s traditionally been a classical instrument doesn’t mean it can’t be whatever you want it to be”

It’s an attitude that transcends her music and governs her life.

“I feel the same way with people. … I love to share that people can define themselves,” she says. “Turn your art or your life into what you want it to be.”

And Stirling has done just that. For the past few years she’s toured the world with her own brand of performing. She rose to fame half a decade ago, starting by qualifying as a quarter finalist on America’s Got Talent. She went on to garner massive YouTube success with her electrifying performances and visually stunning music videos. Her video for the hypnotic “Crystallize,” where Stirling dances with her violin through an ice castle, was the eighth most watched YouTube video of 2012.

She’s since released two instrumental albums, followed by this summer’s Brave Enough, which features not only Stirling’s prowess on violin, but her lyrical stylings as well.

Stirling was drawn to the violin as a child, noticing the instrument when her parents would take her to symphonies.

“I saw the violinists always get the fast parts and the solos, so when I was like 5 or 6 I was just begging for lessons,” she says. “And my parents were like, ‘I think she’s serious.’”

She went on to train in the traditional Suzuki method and played in her school orchestra. In high school, she joined a rock band called Stomp on Melvin.

“I loved the idea getting to write my own parts and create music rather than this regimented classical music where you played what was put in front of you on a piece of paper,” she says. “I thought it was so cool to be able to write and jam, and people would dance, and it was just so fun.”

Stirling began experimenting with mixing different musical genres, transcending the limitations of simply playing classical. On Brave Enough, Stirling had a laundry list of styles she wanted to try.

“I really wanted to have a Bollywood song (“Mirage”), I also wanted song with a country vocalist (“Those Days”), and I wanted a rapper (“Don’t Let This Feeling Fade”), I had all these things. I wanted to tie together so many different, unexpected genres and somehow make it feel like a cohesive piece of work,” she says. “It all just comes down to the style of my playing. And the violin kind of ties it all together.”

Brave Enough is a personal album for Stirling following the death of her best friend. She’s never been shy to talk about her struggles — her past single “Shatter Me” deals with her battling anorexia — but this album came at a time of great loss for her.

“I had closed myself off when I first started writing this album,” she says. “I was trying to numb myself from everything. I was trying to write; I was trying to emote; yet I couldn’t write anything. I realized before I was able to write, I had to open myself up again.”

Stirling used the album as a means to chronicle her grieving process, starting with the album’s first track, “Lost Girl.”

“It was how I felt at the beginning of the writing process, feeling a little bit lost, like I had lost my voice, that I had lost a huge piece of myself,” she says. “And the album continuously gets warmer, in terms of the musicality and the tones but also thematically and what the songs are about.”

The record goes on to explore various themes including gratitude, hope and perseverance in the face of failure.

In her single for the album “The Arena,” the music gradually builds to a determined climax, as if following a brave hero on a daring journey that ends in success. In the song’s steam punk, post-apocalyptic music video, Stirling dances in a desert arena as onlookers jeer. She looked to a Theodore Roosevelt quote for the song’s inspiration: “It is not the critic who counts; not the man who points out how the strong man stumbles, or where the doer of deeds could have done them better. The credit belongs to the man who is actually in the arena.”

Brave Enough also breaks new ground for Stirling. For the first time, her album features collaborations with singers, challenging Stirling to write lyrics as well as the music. The singers include Christina Perri, Andrew McMahon and Rivers Cuomo from Weezer.

“My high school band, we always wanted to sound like Weezer, and River sings on the album,” Stirling says. “If my 16-year-old self had known that, I would have had a panic attack, I’d be so excited. … There’s a lot of people [on the album] that were kind of bucket list, dream collaborations.”

Stirling is now embarking on a national tour, and then she’ll head to Europe next year. In her stage shows, like in her videos, she embraces theatricality, with dancing, stage effects and a touch of magic.

“I love putting on a show,” she says. “That’s one of my favorite parts of the whole cycle. You write the music, you make the music video, and then you perform. Getting to see the music come to life on stage, and see people’s expressions and see them smile as I play these songs, it brings it to life for me as an artist.”