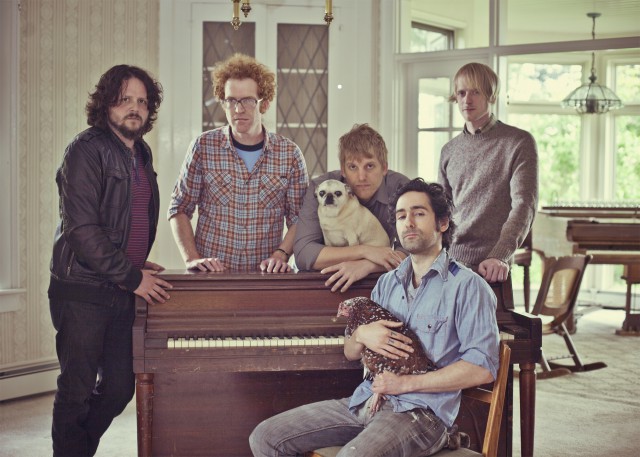 Whether Eric Earley is writing about it or talking about it, any discussion of the music he makes for Blitzen Trapper presents an uneasy exercise. He states an answer then verbally erases it — a songwriter uncertain of how to objectively speak of his craft. Earley completely inhabits his role as an artist, which makes it difficult to get him to look from the outside in.

No matter, since the music of Blitzen Trapper speaks so well for itself. The Portland, Ore., band’s fusion of nostalgic country, folk and rock simmered for most of the last decade — seven years to be exact — in personal recordings and local shows. But once the cat wrestled free of the bag on 2007’s Wild Mountain Nation — thanks in part to Pitchfork’s Best New Music designation — the ride has been relentless ever since.

Early comparisons ranged from Pavement and Grateful Dead to Lynyrd Skynyrd and The Band, showcasing a versatile enough sound for Earley & Co. to land credibility on tours with The Hold Steady, Iron & Wine, Stephen Malkmus and the Jicks and even Wilco. Festival appearances followed for Blitzen Trapper at Coachella and Sasquatch, and Sub Pop came calling somewhere along the way. It was every independent band’s dream.

Yet all the while, the members of Blitzen Trapper — now five with the loss of Drew Laughery — have held loose to the fame that continued with subsequent releases like Furr (2008) and Destroyer of the Void (2010). It’s that rootedness that keeps BT from rising and falling with the inevitable hipster hype — and it’s also the subject of the band’s upcoming release, American Goldwing.

“American Goldwing is a lot more rock ’n’ roll and also a lot more country than anything we’ve done to this point,” says Earley. “In that sense, it’s a lot more personal. I grew up with a lot of music that was comfortable — nothing experimental or anything. It was music that you could just hear your uncle or dad playing in the garage while they worked on the car. Or maybe my older sister would play something recognizable. They were into more ’70s music. It was that kind of thing.”

Those influences have always existed at the core of Blitzen Trapper’s music, not only musically woven through each release but also lyrically as well. Yet Earley says that personal, nostalgic influence goes beyond an influence to much deeper levels on the band’s latest.

“I’ve always explored those types of sounds, and there’s always been that aspect of nostalgic country and rock to my music,” he says. “The subject matter has always pushed things in that vein, too. In the last year or so, I’ve been thinking a lot about my family and where I come from. I’ve been thinking about relationships that I’ve had and people that I knew. My best friend has a kid now. It’s just looking at those things close to you and letting them inform the lyrics.”

American Goldwing is also the first BT release that features more than the band members’ fingerprints on it. Tchad Blake was brought in to mix the album and Gregg Williams co-produced the tracks. Earley says it was the first time he could truly let go of something, but it was also now a possibility financially, given the band’s larger budget for recording now. “[Blake] just gave a new perspective to all of the music, and there’s just this very specific thing that he does,” explains Earley. “He did the last few Black Keys records. He’s been around a long time, and he’s just this eccentric sort of ear. His ears are cool. He made it old-sounding yet modern at the same time. He’s really good. It’s just hard to put your finger on.”

Earley says fans won’t be too surprised by anything they hear on American Goldwing, since it stays inside the terrain they’ve covered on past releases. Yet he does believe it’s their most consistent album to date.

“Our records tend to go all over the place in terms of genre and feeling, but this one feels more consistent compared to the ones that have come before.”

With an upcoming show at Denver’s Bluebird Theater, Earley says fans should expect to hear some experimentation with the new songs as well as some interesting covers. It’s part of a smaller 10-city tour with AgesandAges to try out the new songs for a larger fall tour. Then again, Earley backs off that statement just as quickly as he says it, realizing that he doesn’t know what to expect himself. Fans will have to be content to let the music be the primary voice for Blitzen Trapper once again.