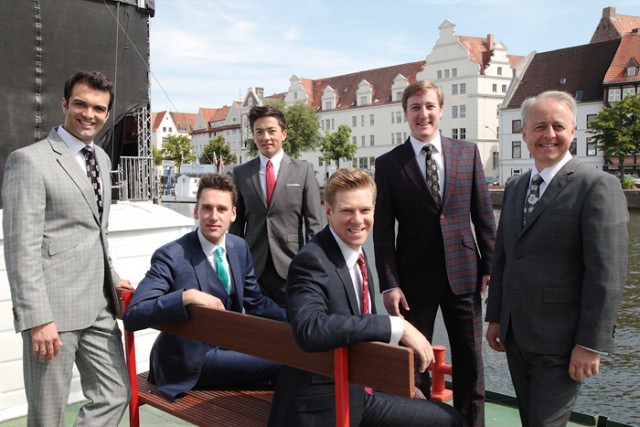 It’s all about the blend.

No, not coffee. Blend is how countertenor Timothy Wayne- Wright explains the unique and unmistakable sound of the King’s Singers, who bring their men’s a capella singing to Macky Auditorium for a Christmas program at 7:30 p.m. Thursday, Dec. 11.

“At the core of everything we do is the blend [of the voices],” Wayne-Wright says. “We say that we go on stage as six voices but we want the audience to hear just the one voice.”

Founded in 1968 by six friends at King’s College, Cambridge — hence their name — the King’s Singers have become known worldwide for their “close-harmony” style. Indeed, they invented the term, which describes their style of singing, featuring chords with notes very close together — what Wayne-Wright calls “clashy chords.”

“The only way that these chords would work was by singing without vibrato, with a very soft, breathy tone,” he explains. “That’s the way the chords would sound true. If you add any vibrato or add any edge to the sound, the chords simply don’t shimmer as they need to.”

The blended sound that puts the group ahead of the individual is rooted in the English choral tradition, which members of the group have all grown up with. And it is the first priority when they audition new members.

At his audition, Wayne-Wright remembers, “Philip Lawson, the previous baritone, said to me, ‘This is the only audition that you come into that we do not want to hear you.’ I left the audition not really knowing if I’d done a good audition or a bad audition, because I didn’t feel I had really sung anything.”

It was only when he was called back that he was able to use his solo voice.

“Then you can enjoy yourself, when you’ve got a solo line,” he says. “But not in an operatic way — it’s sort of a half-step forward.”

From the beginning, the King’s Singers have featured the unusual combination of two countertenors (men singing in falsetto voice), one tenor, two baritones and one bass — which just happened to be the configuration of the original six voices. They have kept that combination for 46 years, as members retired and new singers came on board. Today they tour for six months of the year, presenting 120 concerts around the world, including U.S. tours that take them from coast to coast.

Another feature of the original King’s Singers is the basic outline of their programs.

“At the start, the group needed to do everything, because it didn’t have enough of [one kind of music] to fill a whole concert,” Wayne-Wright says. “It had to look upon the folk songs, the spirituals, the pop songs of the day, had to do bits of everything just to fill up a concert. So the group quickly became known for doing different types of genres in one program.”

For “Christmas with the King’s Singers,” they will open with Renaissance pieces for the season by William Byrd and Orlandus Lassus. Those will be followed by three pieces by Herbert Howells, whose music is one of the foundation stones of the English choral repertoire, and some contemporary pieces ending with Un soir de neige (“A Snowy Evening”) by Francis Poulenc.

“After we come back on for the second half, the audience have earned their light repertoire,’” Wayne-Wright says. “We’ve got four lovely pieces from the Catalan region of Spain, and then we finish with ‘Jingle Bells,’ the ‘God Rest Ye Gentlemen,’ the ‘Deck the Halls,’ these sort of things, so the audience comes out with a smile.”

“Christmas with the King’s Singers” is only the tip of the holiday music offerings in and around Boulder. Before they hit town, the University of Colorado will offer its popular annual Holiday Festival at Macky Auditorium Friday though Sunday, Dec. 5 to Dec. 7. These performances may be sold out; check with CU Presents for the latest ticket information at 303-492-8008.

Here are some other musical holiday events in the region: