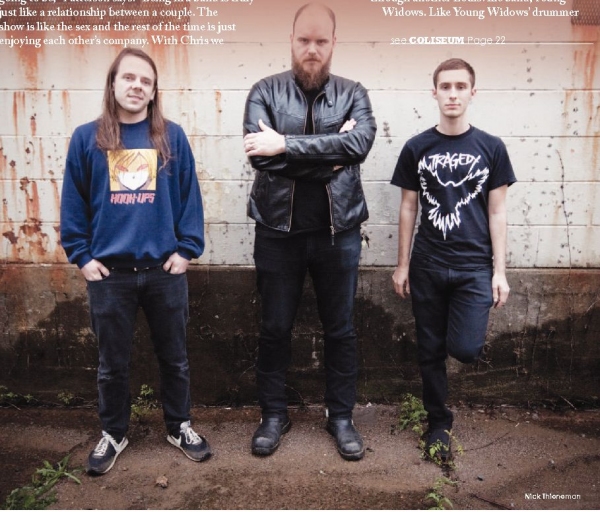 “It’s just like those people that got married at 18 and stayed together forever,” says Ryan Patterson, frontman of the Louisville, Ky., punk band Coliseum.

“This lineup of the band feels like it should be the one forever. But who fucking knows?” Things haven’t always been so harmonious within Coliseum, which formed in 2003 with Patterson, bass player Mike Pascal and drummer Chris Maggio. After recording and touring on the band’s last record, No Salvation, it became clear to Patterson and Pascal that working with Maggio was no longer an option if they were to progress as a band.

“We were not on the same page and we were never going to be,” Patterson says. “Being in a band is truly just like a relationship between a couple. The show is like the sex and the rest of the time is just enjoying each other’s company. With Chris we tried for many, many years and it just didn’t work.”

Patterson is vague about the specifics of the breakdown, but says the band struggled with its rhythmic identity: Maggio wanting to use the band to outlet his blistering, ultra-technical drumming as an entity all its own, and Patterson and Pascal needing a drummer to complete the rhythm section and be part of a singular sound. Something had to give.

“That’s why most bands break up,” Patterson says. “I’ve been in those bands where it breaks up constantly and I knew Coliseum was never going to be that band.”

With Maggio out of the picture, Coliseum found Carter Wilson, a drummer from Birmingham, Ala., through another Louisville band, Young Widows. Like Young Widows’ drummer McMonigle, Wilson’s
approach to drumming is centered on the beat first and flamboyant
flourishes second. Though many have argued that Maggio is the superior
drummer of the two, his grandiose playing style often overshadowed the
band as a whole. Wilson and Pascal’s playing styles are similar, making
for a much firmer rhythmic foundation, something Patterson appreciates.

“It
honestly took a huge level of stress out of my life,” Patterson says.
“We felt freed up that we didn’t have to be going 100 mph all the time.
We can strip it down and have an actual drumbeat, then the guitar can
move around a little. There’s more room for vocals.”

The change is immediately obvious on Coliseum’s latest, House With A Curse, a
powerful, rhythm-focused album of hard-edged burners and slower,
ambling tunes reminiscent of the Jesus Lizard. For the first time in
the band’s life silence plays a huge role in the sonic patchwork, and
no one instrument or personality overwhelms the mix. It’s also
noticeably slower-paced than anything Coliseum has done before.

“In
punk and hardcore, speed has become synonymous with energy,” Patterson
says. “The challenge was figuring out how to make it energetic without
playing super fast.”

Patterson, a hardcore/punk veteran, has been a staple of the Louisville scene for
most of his life. He’s played in a host of that city’s best-known bands
including Black Cross, The National Acrobat, The Enkindels and
Metroschifter. His guitar and vocal skills are renowned in the heavy
music community. So what was his first inclination when trying to
discover his band’s new sound?

“I
probably should still be taking them,” he laughs. “But I got the
general idea. I thought the album was going to have a lot of piano and
keyboards on it.”

The experiment did not go well.

Despite
his best efforts, Patterson’s keyboard creations never approached the
level of his guitar playing. And the tunes that he produced didn’t
exactly fit the Coliseum mold.

“I
immediately got to places that were way too far away from what we were
trying to accomplish, but I think that was an important part of the
progression of the record,” he says.

But
the piano lessons may have been a red flag that Patterson wasn’t
content to keep doing the same thing over and over with Coliseum. He
and Pascal had a new, likeminded drummer and were ready to turn the
band’s direction around.

“I’d
rather jump off a cliff and see where it takes me than keep running in
the same old circles,” Patterson says. “As a human being you don’t wear
the same clothes forever. You don’t keep the same haircut. As life goes
on you change. It’s the same with a band. Things just naturally happen.”

Moving
forward is a big theme with Patterson, whose favorite bands are those
that took something powerful and used it as a stepping stone for new
artistic endeavors, not treading familiar ground. It’s not a trait
everyone is comfortable with.

“Minor
Threat broke up in 1983 and Fugazi started in 1987. In that time (Ian
MacKaye, the singer of both bands) went through a huge progression,”
Patterson says. “Look at the changes between Gorilla Biscuits and
Quicksand. That’s just the nature of art. Most every band I love
changes a lot from beginning to end, and I don’t get broken hearted.”

In the midst of touring in support of House With A Curse, Patterson
says he and the other members of the band are already looking forward
to the next release. And for the first time ever they’ve got a bunch of
songs ready to go. Originally, the band planned to record House With A Curse with legendary pro ducer J. Robbins, who fronted the D.C. post-hardcore
band Jawbox throughout the ’90s and a host of other bands since. Just
days before Robbins was scheduled to arrive in Louisville for the
recording he had an emergency and couldn’t come. Robbins mixed the
record, but the band still wanted to work with him as producer. They
got their chance in July when, during a day off on tour, they met up
with Robbins in Washington, D.C. His own studio was booked, but Don
Zientara’s legendary Inner Ear studio wasn’t. So the band and Robbins
holed up for an all-day session, writing and recording four songs from
start to finish.

“I
kind of don’t want to have a threeyear break between records this
time,” Patterson says. “We have three songs from the [House With A Curse sessions],
a demo and the four songs from July with J. I feel like a year and a
half from now having a new record out wouldn’t be a bad thing.”

Whatever that record sounds like, it’s a safe bet it won’t be a rehash of House With A Curse. If people like it or don’t isn’t of great concern to Patterson. All he cares about is moving forward and doing what feels right.

“There are people who will never dig our new record because they are No Salvation fans,” Patterson says. “You just kind of do what you do and see how things fall.”