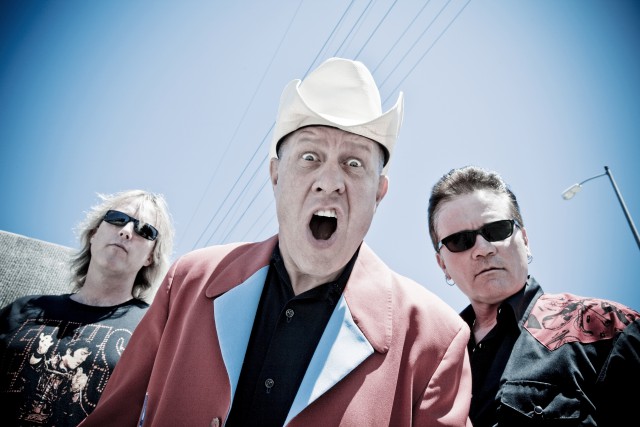 Reverend Horton Heat wants his fans to
know that he’s still the same psychobilly,
even if his new album doesn’t sound
like it.

That CD, Laughin’ and Cryin’ with
the Reverend Horton Heat, is filled
with honky-tonk and rockabilly, but
there’s not much punk to be found
on the record, a rather dramatic
departure for the good reverend.

That said, singer/guitarist Jim
Heath, aka The Rev, has a message
for those who might be surprised by
the new turn on the new disc —
things really haven’t changed.

“It leans country,” Heath says of the new album. “But
I’ve been telling people we’re not going country.”

In fact, Heath says, the honky-tonk album is really
taking the band back to its roots, before the term “psychobilly”
got tagged on the Texans.

“When Reverend Horton Heat started in the ’80s, we
were trying to be an authentic rockabilly band,” Heath
says. “Instead of playing authentic songs from the ’50s, I
wrote songs I thought would fit in that genre.”

Three songs dating back to that ’80s era, including the
opener, “Drinkin’ and Smokin’ Cigarettes,” made their way
onto Laughin’ and Cryin’.

“It was such a good song, I wanted
to hold it back until the time was
just right,” Heath says with a laugh.
“I’ve got a lot of songs. I might have a
few old ones hanging around for any
record. It’s funny, it’s old friends and
fans who remind me of them.”

The three older songs were
penned in ’85, ’86 and ’88. But they fit seamlessly along
side the honky-tonkers and quasi-ballads that Heath
recently wrote for the album, which is a lot noisier, grittier
and funnier than anything in mainstream country.

Songs with titles like “Oh God! Doesn’t Work in Vegas,” “Just Let Me Hold My
Paycheck” and “Please Don’t Take The Baby To The Liquor Store” aren’t
likely to be coming off Music Row anytime soon.

Nor
are admonitions like “Ain’t No Saguaro in Texas” or a take on “Death
Metal Guys,” which makes the wildest of the old rockers look tame.

All
of the above are delivered in country motifs, and the subject matter of
drinking, gambling and celebrating the Lone Star State goes back
decades. But there’s a looseness to the Horton Heat honky-tonk approach
that shakes off any notion of retro traditional country, swing or
rockabilly.

“When
I started out, I wanted to make a quietly country-sounding album,”
Heath says. “I don’t know if I exactly got it. … I guess it’s Reverend
Horton Heat country.”

Heath will serve up about a half dozen of the songs from Laughin’ and Cryin’ in the live set on his winter tour, a solid helping of country that will alter the standard raucous Horton Heat show.

“It
changes it a little bit,” Heath says. “We still try to play what they
want to hear. What people pay their ticket price to see us play, we try
to play our better ones, our most requested songs. You can’t do them
all everynight. But we try.”

Those
songs include Heat classics like “Wiggle Stick,” which turned up on MTV
in the ’90s, “400 Bucks,” “Bales of Cocaine” and the retro-swing hit
“It’s Martini Time” that opened the door for Heat’s music in movies, TV
shows and video games.

Now
the song “Psychobilly Freak” is bringing in a new generation of
converts for the reverend, exposed to his wildness thanks to its
inclusion on the Guitar Hero 2 video game.

Heath’s
wildness these days is largely reserved for the stage. He’s had his
fill of what people call the “rock ’n’ roll lifestyle.”

“I
don’t put a lot of stock in that,” Heath says. “I think it’s a lot of
B.S. People say rock ’n’ roll is an attitude. No. Rock ’n’ roll is a
great piano player like Jerry Lee Lewis tearing it up on stage. It has
nothing to do with how wild Jerry Lee Lewis was when he wasn’t on
stage. It’s the music. There are a lot of people who have fallen into
that trap.”

To
that end, Heath says, the Reverend Horton Heat (which also includes
bassist Jimbo Wallace and drummer Paul Simmons) has toned things down
on the road, starting before the show and extending throughout the
night.

“We don’t
drink before the show anymore,” he says. “If you drink before you start
the show, it never ends up good. Never. It’s better to do shots at the
end of the night, if you’re going to drink. And the recovery time is
longer now, so you have to be careful about that. Instead of living the
rock ’n’ roll lifestyle, I focus on, ‘Hey, we get to play music.’”
Turning down the tearing it up has set the Reverend Horton Heat on the
path that Heath envisioned when he was learning to play guitar in
Corpus Christi, Texas, and fell in love with the blues.

“What
I wanted to do was play really cool music rather than getting the big
hair and going into metal and trying to be a star,” Heath says. “I
wanted to be a career artist, even when I was a kid.”

So,
after a quarter-century, Heath’s role models are the likes of bluesmen
B.B. King and Muddy Waters. He adds a couple of others because he’s
from Texas. “The ones that last have learned to have a good time, but
to do it in moderation — like Ray Price and Willie Nelson,” he says.

Moderation also applies to Heath’s philosophy about his career and the music industry.

“The music is as fun as it’s ever been,” Heath says. “But at the same time, there’s a
little loss of the youthful hopefulness. When you’re a young band,
you’ve got that kind of career-fueled excitement, that whatever happens
can be the next big step forward. You lose that. And I’m kind of glad
about that.”

Not
worrying about whether an album will generate a hit or whether he’ll
become a millionaire through his music actually puts the focus where it
should be — on the music and the show, Heath says.

That focus and a solid fan base developed through years of touring and recording provide the freedom to make an album like Laughin’ and Cryin’ … “without having to worry about, all of a sudden, it’s a career-ender,” he says.

Fans,
Heath says, are critical for any artist who wants to have a long,
lasting career, and he quickly acknowledges his ongoing appreciation
for those who have made the Reverend Horton Heat what it is today.

“I’m
still really tickled and really grateful with how well Reverend Horton
Heat has done,” Heath said. “We love to play music. As long as I feel
like I love to play music and want to get better at singing, writing
and playing music, we’ll stick with it. The Reverend isn’t going
anywhere.”

On the Bill:
Reverend Horton Heat plays the Ogden Theatre on Jan. 14 and the Boulder Theater on Jan. 15. Doors open at 8 p.m. Deadbolt opens. Visit ogdentheatre.net and bouldertheater.com for ticket information.