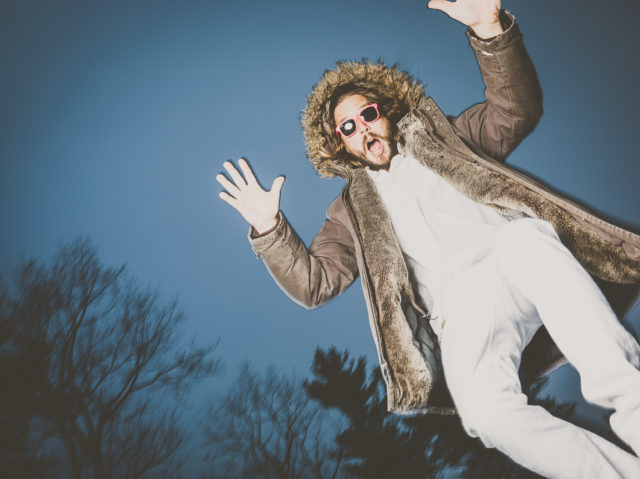 I caught up with Marco Benevento a few days after that freak(ish) March blizzard — bearing the elegant moniker of Winter Storm Stella, and by the way, when do we get to name our snowstorms anyway? —  at his home in Woodstock, New York.

“North of the City” is old stomping grounds for this correspondent, but I didn’t live with farmyard fauna skittering around the yard like Benevento does, and for some almost equally freakish reason, I was briefly gripped with fear for the safety of his peacock. What do peacocks do when their sandlot piles 2-feet high with snow?

“But yeah, it was pretty rough, actually. I had snow way up above my eaves. We have a plow guy and a generator… although, something happened to the generator and we had to pull the battery out and hook it up to the van. It was like, ‘Oh my God, this is so Woodstock country livin’…’”

They did plow the Thruway, though, and when I caught Benevento chilling at home, watching Stella’s aftermath turning Woodstock into a giant cultural slush puddle, he was in the midst of a three-day run at the Brooklyn Bowl with Joe Russo’s Almost Dead, his old partner’s breakout Dead trib enterprise. Brooklyn is a homecoming venue for the erstwhile and stunningly popular band.

“Last night was good — we had Oteil [Burbridge] playing bass, so it was nice to hear some different sounds and different takes on the material,” Benevento said.

“But yeah, it’s been insane; one day is rehearsal for my own tour, fly somewhere the next day, play a gig the next, do some more rehearsing, maybe do some studio stuff here in Woodstock. They’ve got a lot of studios in Woodstock, and I know most of the engineers, so they’ll call up and ask me to come in and do a session. So it’s been a little crazy, but like they say, get it while the getting’s good.”

Benevento spent most of last year touring his own band behind The Story of Fred Short, his double album and part musical song cycle dedicated to and inspired by the mercurial musical shaman of Woodstock of the same name, a cheerfully ambitious project of frayed grooves and nouveau-psychedlia stylings that featured — and for Benevento this was a pretty big deal — his newly empowered role as a lead vocalist. He just released a live studio album, cut in Woodstock, featuring that song cycle in all its ragged and gleefully unhinged glory, brimming with his trademark keyboard wizardry and festooned with paisley pop-star mirth.

Clearly, Benevento is gaining confidence as a singer. Mostly.

“Yeah, I’m still not totally sure if I’m a singer, and I still hate the sound of my own voice, but it’s like the lyric-writing process, too, which is another intriguing thing for someone who comes from instrumental music,” he admitted. “After making four or five records that are basically instrumental, I kind of feel like I’ve opened up this door and I’m curious to see how much better I can get at it.

In a subtle sort of way, Benevento is something like the counterbalance to the archetypal, Berklee-drilled instrumental powerhouse of a prior generation; a player at ease with the split-second demands of improvised music and a musical curiosity that breezes easily past genre barriers. Used to be that the star of the program was the vocalist, or the guitar player, and when virtuosity was the point, it was highlighted and foisted on the audience as the real cost of admission. For Benevento, paradoxically schooled by the music of keyboard monsters of the ’60s and ’70s — Chick Corea, Herbie Hancock, Larry Young — but ultimately liberated by the vast depth and deepening maturity of ’80s and ’90s electronica, the virtuosity is subsumed by the context, the texture of the piece, the madness of the moment.

For anyone who encountered piano lessons as a kid, the reality is stark, certainly starker than for the wannabe guitarist. The pianist has to know the theory. Keys don’t let you slide, at least not in the way that lots of sludgy distortion can forgive a bum note on a guitar fretboard.

“It’s like this mystical, weird thing when you start learning theory. Like, what makes a third, what makes a major different from a minor?” Benevento mused. “I’ve taught theory to some people, like my uncle who just kind of wanted to know how it all works. In the end though, it’s sound and what you like. Some of the best musicians don’t know a damn thing about theory. But I’ve seen other people get totally sidetracked by it, as if they don’t care about it but they think other people think they should care about it. Some people are really drawn to it, and that’s cool. But in the end, you should just play your music for other people to enjoy.”

And Benevento, a self-admitted tennis junkie when he’s not playing the keyboard, has also taken up another hobby: skateboarding.

“Yeah, I used to skate a lot when I was a kid, always wanted to do half-pipes and stuff like that, so I’ve started to do a little bit of it again. Kind of re-capturing some of my youth.”

Suggests the elder, isn’t that a little… y’know, risky?

“I wear boxing gloves, so I don’t hurt my hands.”