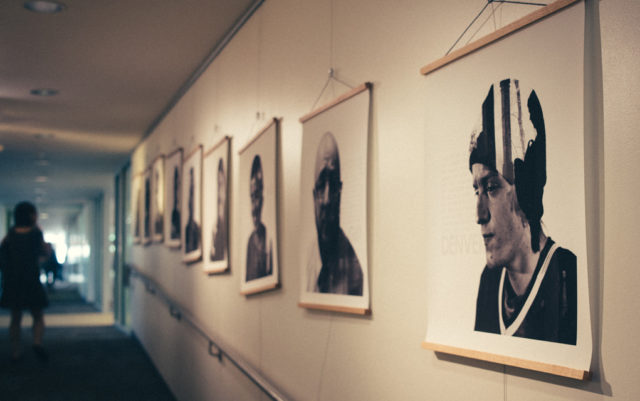 Kassia Binkowski decided it was time to choose differently and so set her team on the path to tell the whole truth. Two years ago they embarked on an in-depth public art piece, The Sonder Collection featuring (In)Visible Boulder County, a film and photography pairing that collects and tells stories from marginalized populations across Boulder County.

Perhaps to empower the audience she hopes to reach, Binkowski talks about the way we see our community as a “choice.” It is a blindness that she recognized from her unique perch at One Thousand Design, a creative production studio dedicated to working with social impact organizations. Through her work, she has gained unique insight into the network of nonprofits that serve Boulder County.

She sees through the lenses of the issues that the nonprofits seek to alleviate, and also has realized the groups work in silos of their distinct causes, without the community vision and cooperation needed to create meaningful and lasting change. She sees the potential of what these organizations can accomplish if they come together.

“Having been a Boulder resident for more than a decade, I was inspired and also frustrated by the disconnect between Boulder’s self-perception and its actual reality,” Binkowski says. “I really wanted to share the voices and the stories that we don’t ever hear, to reach out to the neighbors that just don’t have the opportunities and platforms that the rest of us do. I wanted to help our community make a different choice.”

(In)Visible has sprung from a fledgling idea to a comprehensive multimedia art project currently on tour across the County. You might have stumbled across it at the Pine Street Church, Front Range Community College or, most recently, at the Boulder Public Library as ordinary hallways became galleries featuring dozens of black and white photo portraits.

A smiling woman with her eyes downcast, a loose smile and a bindi centered between her brows; her image blurred slightly by the ghostly image of a schoolgirl and the words “I was” boldly printed next to her face. Next in line, a photo of another woman, staring off into space, her image transposed with that of a public bathroom, the word “before” hovering next to her eyes.

One by one, pictures showcase individuals and their unique stories, the accompanying words hanging nearby not in explanation, but as proof that a person can’t be boiled down to something so simple because, in such simplicity, the personal becomes universal.

“My dream,” “I need,” “I am,” — declarations we all share no matter where we come from and where we have to go.

The project will culminate at a screening of a film documenting the dozens of interviews conducted by One Thousand Design at the Dairy on Sept. 14, followed by a panel discussion of the nonprofits, government agencies and individuals involved in the project. The idea is to turn the art project into a conversation and to inspire an ethos of empathy among the stakeholders and audience alike.

In ruminating on the success of the project, Binkowski credits a crucial partnership with Boulder County Community Services that was integral in providing funding as well as in recruiting participants. Mike Stratton, communications specialist for the department was eager to get involved with the project two years ago when Binkowski first approached him with the idea, but says that back then its value was intangible and hard to quantify. Now, he says (In)Visible doesn’t just “feel” important, but is, and for a couple of reasons.

“The political climate has forced social issues to the forefront of our public consciousness,” Stratton says. “People want to engage with these more difficult social considerations, ones that they didn’t recognize until now, but ones that Boulder area organizations have been dealing with, behind the scenes, all along.”

He also brings up a more concrete concern, saying the project is bringing people into conversation as critical funding sources are cast into a shadow of doubt amid federal cutbacks likely to trickle to local governments and social programs. He says now is an important time for communities to begin exploring new ways to support the marginalized among them.

(In)Visible is helping Boulder County to become aware of how dozens of organizations overlap, he says, and of the shared nature of problems, from homelessness to immigrant support to transgender rights. The project is illuminating a new approach that asks communities to look beyond individual causes in order to look at social well-being more comprehensively and more simplistically, by examining the way we relate to one another, as organizations and as individuals.

“This is about busting stereotypes that keep us separate,” Stratton says. “I have come to see that everyone has a story and that every story is worth listening to.”