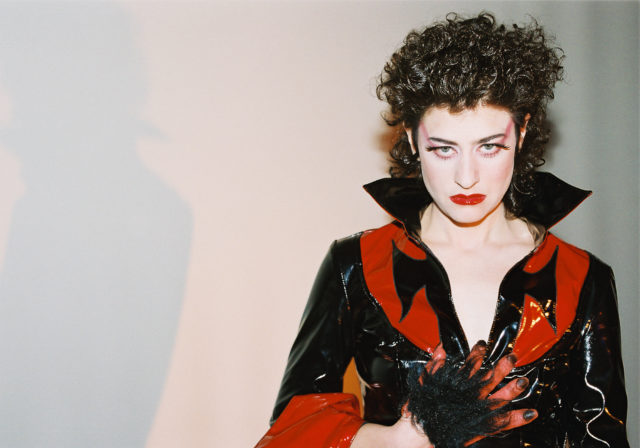 When the iconic, multi-talented Peaches (born Merrill Nisker) answered our recent Zoom call, she was lounging in a sunny Los Angeles backyard, playing with stretches of her flowing hair. Between legs of her first tour since the pandemic began, the famously sex-positive Canadian musician and performance artist—who has also produced and acted in various films and shows—expressed elation, and relief, about getting back on the road.

“I really hated not doing it,” she says. “But what was I going to do? I wasn’t interested in, like, performing on Zoom. It’s been super exciting. People are super excited to go to shows, so they have renewed energy and also sort of an appreciation that we didn’t have before in that way.”

Peaches’ ongoing tour finds her paying tribute to 2000’s The Teaches of Peaches, not just her first full-length album under the Peaches moniker but also the album that features the pulsing “Fuck the Pain Away,” which helped make her an international star and has recently found new life in the Netflix show Sex Education.

“I think people really come to these shows with a sense of their own empowerment and their own love for this album,” she muses. “It’s nostalgia, but what’s good about this album is that it’s not just nostalgic; it’s actually quite relevant, which is really quite unique. It doesn’t feel old. It doesn’t feel like they’re old songs. It feels fresh, which is really cool, and the audience doesn’t feel like an old, tired, ‘I’m coming to see Deep Purple’ or something.”

Peaches probably won’t be juxtaposing “I Feel Cream” and “Dick in the Air” with a cover of “Smoke On the Water” anytime soon, but in a way her music is classic rock for people who fell in love with dancing and singing along to liberating, sweaty electroclash in the early 2000s. Still, the audience is wide-ranging.

“There are a lot of older people—40, 50, 60—and then there are super young people, like 18 or 19, who are really interested in and excited about the whole Peaches thing,” she says. “That’s what I really love, too, is that there is a huge age range.”

When asked if there is even an entryway into her music for LGBTQ kids like mine, who will soon be a teenager, Peaches became animated.

“Sure—it depends on them, you know. For you to listen together, I think actually Fatherfucker is even the one. Everybody loves The Teaches of Peaches because it’s this solo force but, to me, Fatherfucker, which is a little more mature, is where so many people told me that they really understood their queerness. And a lot of people tell me they listened to Teaches of Peaches when they were 12, 11. So, of course. It’s up to them, and it’s also exciting if you want to listen together—whatever’s comfortable for them.”

Making people somewhat uncomfortable might also be important when any musician is touring the United States right now, with a Supreme Court majority built by Donald Trump and George W. Bush wreaking havoc of many kinds, and states like Florida trying to crush LGBTQ rights.

“Yes, it’s a very scary time, of course,” she laments. “We’re turning into The Handmaid’s Tale when we should be moving forward with all the vocabulary and the language that we’re learning and how young people are expressing themselves. It’s a crazy kind of time. This is how it should be, that people get to be who they need to be, and you know as well as I how patriarchal lineages and societal ways are just trying to press it down for visions of power, and to continue the patriarchy. It’s a crazy kind of fight.”

Peaches, with her sensationally sex-positive live shows, might be described as a kind of cult favorite, but she has made records with everyone from Iggy Pop to Christina Aguilera, and interestingly takes as much inspiration from legendary filmmaker John Waters as she does any musician. She’s also tried to bring equality to expletives with Fatherfucker, tackled ageism in entertainment, and even has one of the first female busts cast by Cynthia Plaster Caster, who gained fame in the ‘60s by creating molds of male rock-star penises. The diverse mark she continues to leave on the world – including her work as an actor and multimedia artist – and the disorientation caused by the pandemic, explains why Peaches hasn’t released an album since 2015’s Rub. One is, however, in process.

“I did work on a new record, but it was quite hard,” she explains, “because when we were in the height of it, you’re like, ‘Why? Why would I make music?’ or ‘What is relevant to say right now?’ It was heartbreaking, so it was quite focused more on those kinds of questions, the music that I was making. So I need to get back into that.”

In the meantime, celebrating over 20 years of The Teaches of Peaches on the road has Peaches’ attention right now, and her tour will hit Denver on Wednesday, Aug. 17 at Summit Music Hall. She doesn’t have many vivid Colorado memories from over the years, however, except a random, remarkable time in Trinidad.

“We had a day off and I went to the roller rink there, and it was such a beautiful community. We met the woman who ran youth programs there, and it was really a sweet scene. But I also remember playing in Denver and really feeling the altitude, and getting very dizzy.”

As for Summit Music Hall, “I’m really looking forward to this show, because Yvie Oddly [winner of season 11 of Ru Paul’s Drag Race is gonna open the show. They’re a very unique and incredible performer.”

Oddly is a Denver native who has been doing drag for over a decade, and got into musical theater as a kid after a genetic condition made gymnastics too physically exhausting.

As our conversation ended, I made sure to ask Peaches whether she thinks “Fuck the Pain Away” and her unforgettable live shows helped take music from a place where Trent Reznor could sing, “I wanna fuck you like an animal,” but female musicians in the mainstream were perhaps met with different standards to a current climate where songs like “WAP” become hits.

“That’s not for me to say, really,” she says, “but I’m definitely not mad at all the incredible songs that have come out that are very sex-positive and very female-identified and non-binary forms of expressing both identity and sexuality and creativity. I think we should not forget about Annie Lennox, and Madonna, or Cyndi Lauper, these huge stars, or Grace Jones. It’s just industry and boys’ club, and people just finding their way.”

Peaches says she was “super into Grace Jones, super into Kate Bush” as a kid, but when she was growing up she didn’t get to see anyone in person who really inspired the remarkable concerts she puts on.

“I didn’t see a lot of shows that were in that realm. I wasn’t that lucky. I mean, I saw Bruce Springsteen, but I didn’t see a woman on stage that made me go, ‘Wow!’ or something like that.”

On that note, she concluded our conversation by saying she certainly recommends parents bring their kids to a Peaches show.

“I’m not saying that my way is everybody’s way, but it’s a way, and it could be interesting for them. Maybe they hate it—who knows? But I think it could be pretty exciting, anyway, to develop discussion too.”