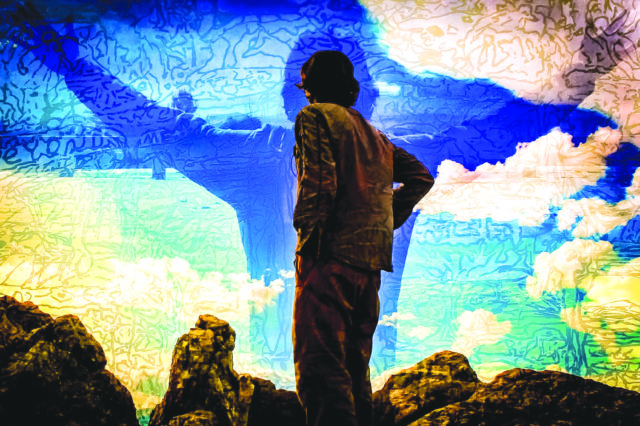 “Do you mind if I have a cigarette?” Bradley Books asks as we sit soaking in late spring sunshine on the patio of Luna Cafe in Longmont. Neither a regular smoker nor a fully recovered one, I don’t mind at all.

He offers me one — an unfiltered American Spirit — but I decline. Too strong, I confess. He takes a sip of coffee and says he didn’t smoke for the past two days.

Cigarettes are a tough subject for Books. He knows how people see him — weak, dirty even — but he doesn’t care. Not much, anyway. Cigarettes are part of Books’ story, a sidekick that’s accompanied him through thick and thin, through hospitalizations and more than a year of homelessness in Boulder. On the other side of homelessness, cigarettes were still with Books as he began an artistic journey that led to today, to his first solo show at the Firehouse Art Center, opening on June 12.

“[Cigarettes] got me out of the house,” Books says of those first days off the streets and in his own basement apartment in Longmont. He’d intentionally smoke his last cigarette before bed. “And then I knew I had to go to the gas station [in the morning].”

That got him on the bus to come to Luna Cafe for a cup of coffee, and then further downtown as he walked and smoked.

Then he met “art people,” like Jessica Kooiman Parker, who was the executive director of the Firehouse at the time. A friend gifted Books some paints and canvases when he’d gotten his new place, and he was creating art for the first time in years. Kooiman Parker took notice of Books’ talent, of the way art flowed freely from him. She listened to his story and saw the meaning behind his work. The two struck up a friendship, and for the past two years they’ve been slowly developing his solo show, Some Men Lie About Other Things.

So, in a roundabout way, Books would tell you cigarettes helped save his life.

You can say that Books is telling himself a story, that he’s lying to himself about the role cigarettes played in his life. And that’s fine. He agrees. But there are worse things to lie about. Books knows firsthand that some men lie about other things.

On June 17, it’ll have been 22 years since Books was first hospitalized for spinal meningitis. He developed the infection as a result of exposure to heavy metals at what is now an Environmental Protection Agency Superfund site in Elkhart, Indiana, near where Books grew up in Osceola. But in 1997, the Conrail Rail Yard hadn’t yet been designated as a contaminated site, and doctors kept telling Books he was delusional.

He spent the better part of 15 years in and out of hospitals, heavily medicated, dealing with pain so debilitating he needed a wheelchair to get around for one 13-month stretch. All the while being told by medical professionals that he’d simply lost the plot. If he could just quit smoking and learn to love himself, they said, he’d get better.

“How did I get off this slew of psych meds, pain meds, opiates?” Books asks rhetorically, taking a drag off his cigarette. “And now I’m using medical marijuana and CBD and nicotine and caffeine. What more could they ask for?”

In Some Men Lie About Other Things, Books displays years of artwork depicting his mental and physical states of being, starting from his exposure to toxins in utero through his year of homelessness in Boulder to today, when Books creates art, runs an art therapy program and moves about the world with no wheelchair or cane. Books uses photos, poems, lyrics, drawings, paintings, found objects and documents to create a memoir of his life, a representation of his brain, body, spiritual being and breath.

“Fundamental to all of us,” guest curator Kooiman Parker writes of the exhibition, “yet elusive to harmonize.”

Though Kooiman Parker is now curator for the Dairy Arts Center, curating Books’ first solo Firehouse show was a natural progression of their personal and professional relationship.

“To me it’s so personal because Bradley is a friend,” Kooiman Parker says. “If I step back and look at it as a curator, I see development of an artist that believes in himself more. I think he’s always believed in himself, but we’ve been talking about it as his moment of showing off where he’s been and how far he’s come and where he is now.”

It’s a complex show, Kooiman Parker says, but how else could you present a life like Books’?

An avid knitter, Books represents his brain with colorful I-cords of yarn snaking back and forth across the ceiling, connecting thoughts to reality. His body is represented over and over again in the exhibition through an ever-morphing stick figure Books calls the “courage-to-be” man.

“To me it’s a paradox of my paranoia, meaning some men lie about other things and that may be myself,” he says, “and to have the courage to keep my brain, body, being and breath as my own. And I fail. I do every day. But at the same time to have that as my ground to go back to and to not concern myself with this opinion or this emotional notion, but to allow myself to have that courage to think my own thoughts, [to have] my own feelings and my own actions — at least attempt to.”

You could argue that the whole exhibit represents Books’ being, as the creation of art is fundamental to who he is. But one wall in particular is filled with dozens and dozens of black and white sketches, the result of a need to create art each and every day. Books admits to feeling guilty if he doesn’t create; his well-being, both mentally and physically, is tied to this act of creation.

And finally, a darkened alcove within the Firehouse invites viewers to experience Books’ breath. A black-and-white photo shows Books lighting a cigarette as a young man with newly emerging health problems. A more contemporary Books stares at his younger self, a cigarette between his index and middle finger. He’s still definitely smoking, still filtering his breath and his thoughts through the tobacco and processing the world around him, deciding whether or not to believe what others peddle as truth.

“I still have fatigue, I still have pain,” Book says, “but I can find a song in knitting, a rhythm, a count to walk in, to move in, to create in, where the cigarette smoke helps me blow off the bullshit, the negativity, the darkness from reality denied. I think of kids in Flint, Michigan — are they now being told they have mental problems when it’s something physical neurologically?”

I wonder if the doom and gloom of the world is ever too heavy for Books. He offers a Neil Young lyric:

“In each drawing, it’s me holding that doom but not falling into the gloom, into the trembling fear, but to allow me to work with it, to live with it, to admit and then accept,” Books says. “It gives me the opportunity to talk of Superfund sites and of toxins and their effect on the body, the mind.”

He takes another drag of his cigarette and processes for a moment.

“I don’t want to go there, but nature’s calling me to.”

A few days after I meet Books at Luna Cafe, I head to Firehouse to watch as he and Kooiman begin the installation for Some Men Lie. This time, I ask Books if I can have a cigarette. It’s been a bad day and I need to process with someone who won’t judge me.

He gives me one and we sit in the sun, filtering the world.