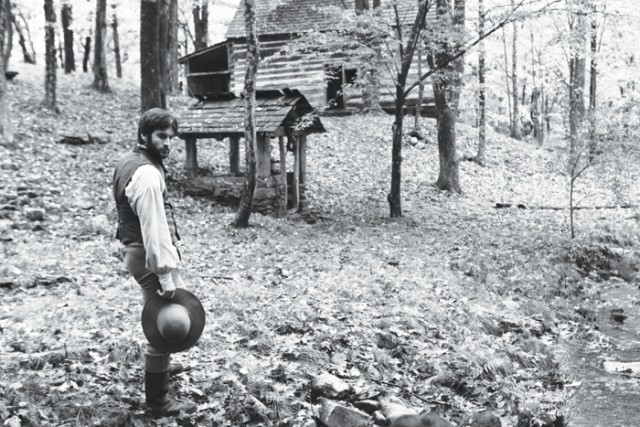 The story of the Great Emancipator began on February 12, 1809 when Abraham Lincoln was born to Thomas and Nancy Hanks in a one-room log cabin in Kentucky. A few years later, the Lincolns left Kentucky, crossed the Ohio River to non-slave territory in Indiana and set up a farm. Here, the boy grew into the man who would take up law and later politics, forever shaping and evolving the free world.

It is in Pigeon Creek, Ind., where The Better Angels, opening at The Boedecker Theatre Dec. 10, picks up Abe’s life at age 10. As Abe (played by newcomer, Braydon Denney) grew into a man of wonder, America around him changed into what became known as the Second Great Awakening, an expansion of several Christian sects that shaped the morality of the nation. Although Abe never formally joined a church, The Better Angels depicts the influence that religion and personal spirituality had on his upbringing.

The Better Angels opens with a quote from Abraham: “All that I am, or hope to be, I owe to my angel mother.” His birth mother, Nancy (Brit Marling) is a believer and in her son she instills virtue. Nancy dies and Abe’s father, the solid and statuesque Thomas ( Jason Clarke), takes Sarah (Diane Kruger) as a wife and Sarah continues the role of spiritual guidance in Abe’s life. From his father, Abe learns to farm and fight. From his mother, Abe learns to love and empathize. Thomas is the rock upon which Abraham is built. Mother is the way of grace.

Although Better Angels depicts the spiritual landscape and morality that would shape the life of Lincoln, the movie never becomes heavy-handed or stilted. Shot in beautiful black and white by cinematographer Matthew J. Lloyd and edited by Alex Milan, Better Angels manages to move and soar, each frame imbued with a sense of urgency. The movie may be set in the past, but it comes across as present.

The Better Angels is the debut feature from writer/director, A.J. Edwards, a collaborator and protégé of the great American Transcendentalist, writer, producer and director, Terrence Malick. Edwards’ Better Angels reflects Malick’s latest efforts: The New World (2005), The Tree of Life (2011), To The Wonder (2013), all of which Edward worked on in various roles.

Better Angels not only boasts Malick as a producer, but his style permeates every frame. From the floating, swirling camera exploring the world with the ever-penetrating gaze of deep focus, to the voice-overs whispered like prayers (the voice-overs are based on the interview with Dennis Hanks, Lincoln’s cousin, in The Boyhood of Lincoln by Eleanor Atkinson), Edwards comes very close to the realm of parody, but his intent is honest and true. Malick’s work can sometimes be cumbersome and difficult to unpack. Edward’s movie is accessible and immediate with a clear vision that overcomes even the biggest of shadows.

The Better Angels is not a historical biopic designed to educate the audience about the intricacies of Abraham Lincoln’s upbringing, but about the emotional ordeal all children must traverse. To borrow a line from the movie, “When a story learns you a good lesson, it ain’t no lie. God tells truth in parables.”